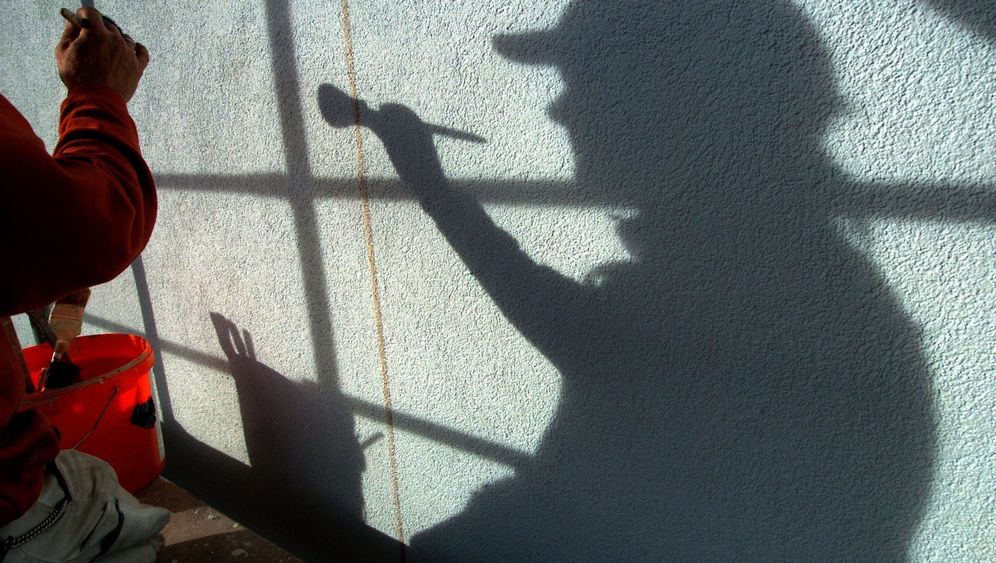 Photo Gallery: The Tragic Death of a Romanian Laborer

Two passersby walking to work on a freezing February morning make a gruesome discovery -- two human legs sticking out of a container for used clothing in the Oststadt district of Hanover.

A man is stuck in the container, upside down, jammed into the opening of a partially engaged metal lid. He has stopped breathing and his limbs are frozen stiff. Firefighters need special equipment to recover the lifeless body. The autopsy reveals that he suffocated.

Few people in Hanover knew the man who died, a 23-year-old, single, Romanian laborer named Kristian Serban. He died while trying to steal used clothing from the container.

For the public prosecutor's office, the case is quickly resolved. Because there was apparently no third party involved in his death, the case is promptly relegated to the files, and treated as nothing more than a tragic accident. But the miserable death of the young Romanian, who lost his life for a few articles of used clothing, highlights the situation of migrant workers from Bulgaria, Romania, Slovakia, Poland, the Czech Republic and Slovenia.

Tens of thousands of men and women from Eastern Europe slave away in Germany alone. They work as construction laborers, clean kitchens in restaurants, harvest asparagus and pick apples in the countryside, and some young women even sell their bodies as prostitutes. Many work without the necessary permits, are paid miserable wages and live in rundown housing. Nevertheless, they prefer life in Germany to the miserable conditions in their native countries.

Of the roughly 14,000 unemployed people in Galati, Kristian Serban's hometown along the Danube River, more than 10,000 receive no government unemployment benefits. Those who can find work in one of the large steel mills shaping the city skyline are relatively lucky. Kristian's father has a job in one of the mills, but his monthly pay of only about €150 ($188), together with the money his wife makes as a cook, is barely enough to support the family of four, especially as Kristian's 17-year-old sister is still in school and contributes nothing to the family's income.

Kristian has to take responsibility early in his life, and he abandons his dreams of studying electrical engineering. As soon as he finishes school, it's time to make money, and construction is the best option. But even though he's an eager and skilled worker, he makes even less money than his father. Kristian, who turns over most of his pay to the family, can't afford any of the things young men typically want, like a mobile phone, trendy clothes and a car.

His plan to move to Western Europe frightens his parents. They need the money, but they are also worried that their only son, a shy young man who doesn't speak a foreign language and has always lived at home, doesn't have what it takes to make it in another country.

Their only comfort is that their son will have a contact in Western Europe, his uncle Pachel Serban. He knows his way around Italy and says that there is plenty of money to be made there, dispelling his brother's fears. "Promise us that you'll take good care of him," Kristian's father says imploringly. "I promise," the brother replies.

While working in the olive harvest in Tuscany, the two Romanians meet M., an Italian businessman who will be their future employer. M. is married to a German woman and is proud of his reputation as a self-made man. In addition to the olive plantation in Italy, he owns several buildings in Germany. He can use capable men like the two harvest hands from Romania.

A Job in Hanover

As it happens, M. owns a large apartment building in Hanover, a former hotel, which is in urgent need of renovation. On the strength of a handshake, the Romanians agree to work for M. in Germany, and they leave Italy in the fall of 2011.

Kristian and his uncle struggle from morning to night. They cap old pipes, tear out dilapidated old toilets, demolish plasterboard walls, build new walls, install flooring and drag around heavy bags of cement. They swallow plenty of dust in the process, and every evening they are completely exhausted.

Their employer M. is no classic exploiter. He lends a hand and isn't above doing any of the work. He eats breakfast with the workers, buys them coffee, is on a first-name basis with them and pays on time. He is especially fond of Kristian, who is hardworking and helpful. "He was like a son to me," M. recalls. But he is also well aware of the advantages of employing Romanian workers. M. pays no social security contributions or insurance premiums, and he knows perfectly well that wages for German workers are much higher.

The two Serbans have never applied for a work permit, though laborers like them can work in Germany, at least in theory. In reality, however, permits for such work are only issued under specific conditions. One is that employers must first consider unemployed Germans with similar qualifications.

The two Romanians lead a dismal existence, working, eating, sleeping and going back to work again. Kristian shares a small room with his uncle and sends most of his pay home to his family. To live up to everyone's expectations, he works on some evenings as a dishwasher in an Italian restaurant M. has leased to another Italian.

"I still feel bad when I think of that boy," admits M.'s daughter. "He was the same as I am, worked like crazy and was supporting his parents," says the 23-year-old. "I, on the other hand, spend my parents' money and can go to school." She once went to the zoo with the Romanians. It was a special experience for Kristian.

He spends most of his free time watching TV with his uncle. He drinks beer once in a while, but no more than one or two glasses, because his tolerance is low. He hardly speaks a word of German, so he rarely ventures out alone into the city, although he sometimes goes to a disco that caters to Romanians. But even though he longs for a girlfriend, he doesn't meet any girls at the disco.

To outsiders, the slight young man seems introverted, almost inhibited. He apparently feels isolated in a world that doesn't understand him and that he doesn't understand. He comes to trust Sari Catalan, a German of Turkish origin, who owns a kiosk a few blocks away, and his Italian neighbor Marcel, a waiter in an ice-cream parlor. With gestures and a few bits of German he has picked up, he sometimes tells the owner of the kiosk, where he sometimes buys beer, about his everyday life. He sometimes watches football on TV with Marcel, who lives on the next floor, or goes to one of the nearby pubs with him.

The 23-year-old hardly indulges himself at all. He sets aside any money that isn't reserved for the family. He tells his boss that he wants to buy a condominium in Romania one day, even if it takes another 20 years. Kristian buys his clothing at a discount chain. On one occasion, he asks Marcel where he can buy inexpensive shoes. But then he decides not to go to a discount store with Marcel, after all. "He probably didn't want to spend the money," says Marcel today.

Many neighbors in the surrounding buildings in Oststadt, migrant workers like Kristian, live similarly modest lives. They include Bulgarians, Croatians and Poles, as well as Indians and Pakistanis, but what they have in common is that they live as frugally as possible so that they can send their earnings home.

The big, gray container for used clothing donations on the street outside, filled with old shirts, trousers, sweaters and shoes, is an insider's tip in the local immigrant community. The container is equipped with an anti-theft mechanism, but clever acrobats manage to circumvent the mechanism. Kristian Serban has also managed to reach inside the container a number of times.

The principle is easy: When the device designed to accept clothing is pressed upward, a gap of about 20 centimeters is created -- enough space to reach inside the container and pull out articles of clothing, which are usually packed into plastic bags. The technique requires concentration, good body control and a slim build.

A week before the tragedy, Kristian and his uncle experience first-hand how dangerous this method is. On their way home, they hear a loud knocking and desperate cries for help coming from the container. A slight worker, also a Romanian, slipped into the steel container while trying to steal some clothing, and now he's stuck inside and can hardly breathe. When his fellow Romanians manage to pull him out, the thwarted thief is trembling with shock.

Temperatures are well below freezing on Thursday, Feb. 9. Kristian seems depressed on this day and hardly says a word. His mother is in the hospital, and the financial situation at home is more tense than usual. Kristian puts €500 in his pocket, which he intends to send to Romania.

After work, he drinks more beer than usual, hoping to forget his troubles. Suddenly he seems cheerful and adventurous. He tries to convince his uncle to go out for a late drink, but the uncle is tired. In the end, his neighbor Marcel goes with him to the bar. At the Spectacle, a traditional German pub, the thrifty Kristian buys his friend a beer for the first time. He laughs a lot and seems relieved. Nevertheless, he can hardly sit still, quickly drinks up and suddenly leaves the bar. His friend Marcel decides to stay. It's shortly before midnight.

Trapped in the Container

The kiosk owner, Sari Catalan, is apparently the last person to see the young Romanian alive. Kristian buys four bottles of beer to go, puts them into a plastic bag and shakes Atalan's hand several times, almost exuberantly. Catalan is surprised that his customer is only wearing a thin sweater on such a cold night, and he asks: "Come on, kid, aren't you freezing?" At this point, the temperature has already gone down to -13 degrees Celsius (9 degrees Fahrenheit).

The container is only about 50 meters away. No one knows what Kristian tried to pull out of the container. A heavy winter jacket because he lost his own jacket? Old shoes because he doesn't want to spend the money for new ones? Sturdy work clothes because his own clothes are worn and dirty?

It is clear, however, that the 23-year-old lost his balance, became stuck and was unable to free himself. The next morning, firefighters find the plastic bag containing the beer bottles on the sidewalk next to him. The money for his mother is still in the dead man's pockets.

When the uncle calls his brother to tell him about his son's death, the father shouts: "Why didn't you watch him? You promised!" His son's body is placed into a zinc coffin and driven the 2,000 kilometers (1,250 miles) back to Romania in a hearse. His employer, M., pays some of the transport costs, because the parents can't afford to pay. The employees at the Italian restaurant where Kristian washed glasses collect money for the burial. More than 400 mourners attend the funeral in Galati.

The city of Hanover ordered the container in which Kristian Serban died removed from its location. According to a city spokesman, it was removed "out of reverence for the bereaved."

The construction work at Italian businessman M.'s apartment building, which was briefly interrupted following Kristian's death, is back in full swing. Kristian's uncle, Pachel Serban, has already found a replacement for his deceased nephew, bringing another relative back to Germany from Romania.