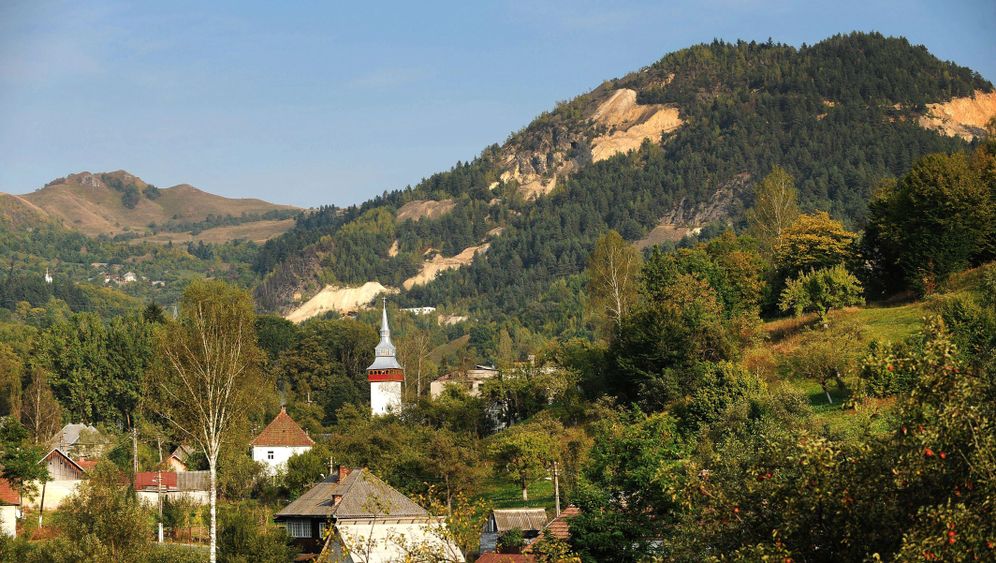 Photo Gallery: The Not So Rosy Debate over Rosia Montana

In a bland and brightly lit ballroom in the center of Zurich, the leaders of a hundred of the world's largest gold exploitation companies looked on as the European Gold Forum opened with a slide show of bank notes from Weimar Germany. One hundred marks, 500, 10,000, 1 million, 100 million, 500 million. It cut to some text, left hanging on the screen as the audience applauded. "Currency destruction through Hyperinflation. Will history repeat itself?"

Over the next three days of last week's conference, many seemed to hope the answer would be "yes". With the price of gold driven by economic instability, the current grim outlook suggests a bright future for gold, as investors shift their money into the relative safety offered by the precious metal. Around the world, mining companies have been gearing themselves up accordingly and, for those at the conference, even the recent dramatic drop in the value of gold couldn't hamper the optimistic atmosphere. "The price drop will be temporary," insists Tim Wood, executive director of the forum's host, Denver Gold Group. "The expectation is that gold will resume its climb and go to new record highs as ultimately the monetary policy of all these countries is going to fail."

A markedly different mood became apparent on the street outside the venue, where a group of anti-mining protesters held banners and waved the flags of their home countries, the colors of Greece, Portugal and Bulgaria conspicuous among them. Breaking through the crowd, a funeral procession of masked figures delivered a gold colored coffin to the doors of the ballroom, chanting as they walked. "Rosia Montana will not be destroyed for gold. Stay out of Romania!"

Though small, the protests resonate widely across Europe. As the sovereign debt crisis continues to grip the Continent, governments have become increasingly responsive to the mining companies' proposals to tap gold reserves. In recent years, environmental regulations, local opposition and high costs have mostly kept foreign mining companies away. Instead, they have focused on large reserves in the developing world. Recently, though, much of Europe has seen what Theodota Nantsu of the WWF calls "an avalanche of regulation rollback" and an opening of gold reserves previously deemed unacceptable for mining.

There is gold to be found across Europe, but the correlation between those countries now moving to exploit, and those hit worst by the sovereign debt crisis is clear. Since last year, the Portuguese government has signed 95 separate contracts with mining companies, with the priority given to gold and silver. In Greece, the government's opening up of its gold deposits to a Canadian company has sparked violent protests reported around the world. In Bulgaria and Turkey, gold mining has been growing exponentially since mining laws were recently liberalized.

"For governments, it's a case of beggars can't be choosers," says Wood. "If you need to raise revenue for your country, then mining is a very good way to do it as you are essentially digging for cash."

In Romania, the extractable gold buried beneath the small Transylvanian town of Rosia Montana is estimated to be worth, at today's prices, somewhere close to €16 billion ($20.8 billion), making it the largest known gold deposit in Europe and third largest worldwide. The joint venture Rosia Montana Gold Corporation (RMGC), which is 80 percent owned by Canadian mining firm Gabriel Resources and 20 percent by Minivest, a government enterprise, secured the license to extract the deposit. RMGC officials the mine would inject a much-needed $4 billion into the Romanian economy and create 3,600 jobs. Despite this, the majority of Romanians stand against it and, after 16 years of planning, the mine remains unopened and has become a highly contentious issue for the government.

The reasons for the public opposition are manifold but invariably stem from the same source -- a deep distrust among Romanians of their government and apprehension over multinationals looking to exploit the country's resources. Tales of deceit and corruption abound. Environmental horrors of the past are recalled in warning, including the cyanide spill at the Baie Mare gold mine in 2000, Europe's worst environmental disaster since Chernobyl. Everywhere, it seems, Romanians see the mine as a form of robbery, facilitated by their government but conducted from abroad, and for which the country will pay the price.

The fight to stop the Rosia Montana is led by Eugen David. A tall and scruffy subsistence farmer, he's not the type of man one would expect at the center of the biggest protest movement seen in Romania since 1989. On this particular day, he stands slightly crooked, drinking a glass of milk in front of the bare breeze block house that he built atop one of the four mountains that encase the town of Rosia Montana. Beneath his feet lie the Roman mining galleries that, for over 100 years, brought gold of unprecedented quantities back to Rome, ushering in one of the empire's greatest periods of prosperity. Across the valley, a huge crater looms over the town, the scar of Ceausescu's scramble for gold that started in 1975 and went on for three decades until, as part of the environmental preconditions for Romania joining the European Union in 2007, it was finally closed down. "Gold is what built this town," explains David. "Now, if they get their way, it will be what destroys it as well."

Though the area has been mined on and off for almost two millennia, the scale of RMGC's mine proposal far outweighs all that has gone before it. Everything that can be seen from David's house -- the four red tinted mountains from which the town gets its name, the two church steeples that break through the treetops, and the 2,000 or so buildings, many of them listed, which stretch down through the valley -- will have to go to make way for the mine. In their place, four huge open pits will be dug, together covering over 8 kilometers in diameter and big enough to be visible from space. Over the hill, the neighbouring Corna Valley will be dammed at one end to hold the 250 million tons of cyanide-laced waste that will come from the gold leaching. After 16 years, when the area has been mined to exhaustion, Rosia Montana will become an exclusion zone, a toxic island in an area that wildlife protection organization Milvus Group refers to as "one of the most ecologically rich landscapes in the country."

Though the use of cyanide in gold extraction has been around for well over a hundred years and has always been controversial, recent advances in the technique are widely believed to have made it safe -- both to the mine operators and the surrounding environment. The methods to be used at Rosia Montana, however, hark back to techniques widely discarded today. According to Victor Bostinaru, a member of the European Parliament and a central figure in the opposition to the mine, "Rosia Montana poses a very alarming risk for contamination. Compared to the modern gold mines of Scandinavia, this seems like a 19th century colonial operation. There is no guarantee that it will not cause severe damage."

Yet the environmental impact assessments (EIAs), carried out by the government and paid for by RMGC, always marked the project as being above board, despite various re-evaluations following public requests. However, the head of the Romanian geological institute told members of the press two years ago that he had been dismissed from his post because of his opposition to the Rosia Montana EIAs. Shortly after, a member of the National Archaeology Commission revealed he was the only member of the commission working on Rosia Montana who had not been paid by the company.

The scandals started to come thick and fast. The contract giving RMGC ownership of mining rights had vanished off the face of the earth, throwing into question the legality of all the company's activities until now. President Traian Basescu was filmed in Rosia Montana calling Eugen David and other opponents to the mine "Bolsheviks" and advising them to sell their homes and leave town. But the media remained largely silent, with all but two Romanian newspapers continuing to plug the official line that the mine will bring nothing but good to the country.

A Long-Term Sentence to Poverty

At the end of 2011, the original contract signed between the government and Gabriel resources, until then a state secret, was leaked online. It showed that the state would get just 2.2 percent of the royalties from the mine. According to calculations done by the Academy of Economic Studies in Bucharest, after the environmental cleanup costs and the repayment of loans taken out by Minivest from Gabriel Resources' purse, the project would generate nowhere near the $4 billion claimed by RMGC, but instead bring "nothing to the region but a long term sentence to poverty."

One month later, protesters in Bucharest took to the streets in Romania's biggest uprising since the revolution. Mostly they demonstrated against austerity measures which, since the country's €20 billion IMF bailout in 2009, had seen half the country's schools and hospitals merged, taxes hiked and state wages, benefits and pensions cut by up to 25 percent. But they also opposed the offered solution. A month before, President Basescu had declared that Romania's way out of its financial problems lay in the creation of jobs through the opening of mines, especially Rosia Montana.

But the people viewed the mine as yet "another symbol of Romania selling out its economic interests for individual gain," says Bostinaru. "We need sustainable development to rebuild Romania's economy and, as it stands, Rosia Montana in no way offers that solution." The leader of the opposition, Victor Ponta, seized on the popular discontent and condemned the Rosia Montana project and the government that supported it, calling for an end to "the alienation of Romania's natural resources" and a move to more long-term development.

Since that time, Ponta's government came to power in a landslide election, unemployment levels have stayed stagnant, and the Rosia Montana mining project has regained its governmental support. Following Ponta's warning that "controversial decisions" will be made about the mine this year, a new incarnation of Minivest was announced on Friday, called Minivest Rosia Montana. Created solely for the purpose of the mining project, it is the first definite sign that the government plans to move ahead with the project since the elections. Meanwhile, RMGC have started the demolition of Rosia Montana in preparation.

Whichever way the mine goes, its implications will reach far beyond Romania. If it goes ahead as suggested, it is feared that its example will lower the bar on environmental standards across the board. Even for the gold industry this could be bad in the long run. Scandinavian companies have expressed fears that it will prompt opposition against cyanide mining across the continent and could ultimately lead to an EU ban, forcing gold mining backwards in terms of efficiency and profit.

If the mine is stopped, it will be an environmental victory against all the odds. With an increasing number of groups across Europe fighting similar battles against mining giants, the Romanian example would set a precedent for what can be achieved even with the most limited of means.

Its that prospect that has kept Victor Bostinaru fighting through the years. "This is a pioneering project. If we don't stop it, who knows what it will mean for the future of gold mining in Europe."