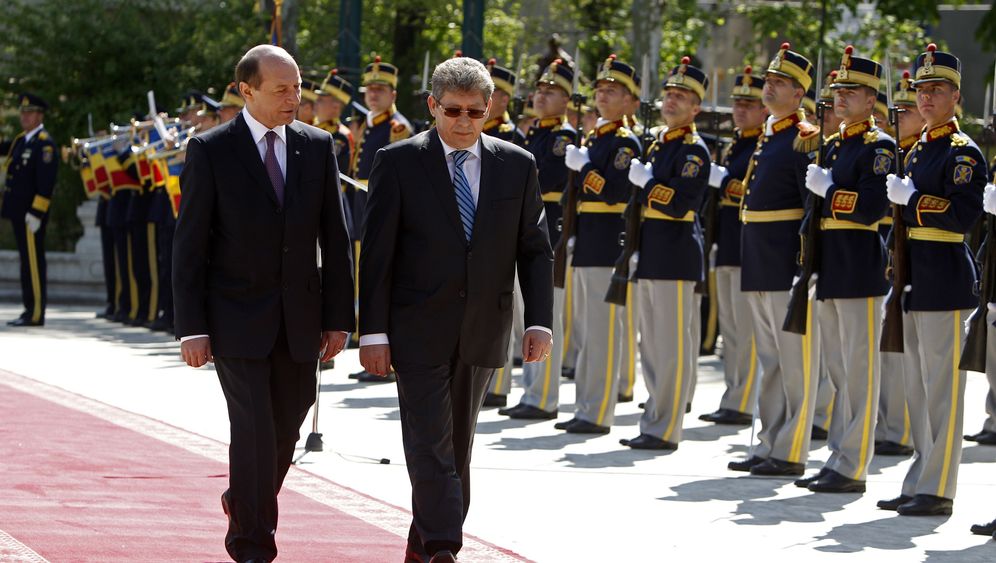 The latest would-be European Union citizens get up early in the morning. Before dawn hundreds of Moldovans, most of them young, are gathered in front of the Romanian consulate in Chisinau, capital of the Republic of Moldova, which is often labeled the "poorest country in Europe."

It is love that has brought Denis Rotari, a trained tiler in a light blue T-shirt, with a dragon tattoo on his elbow, here. "I need money for the wedding," the 21-year-old explains. Like everyone else in this queue, he is applying for a Romanian passport. The passport means potential employment as a day laborer somewhere between Rome and Lisbon.

Almost 1 million Moldovans have already turned their backs on their homeland, where the per capita economic output has only just matched that of Sudan's. They hire themselves out as immigrant labor, mostly illegally. Around 120,000 of the 3.6 million inhabitants have passports that originate from the neighboring nation, and the Romanian government says that another 800,000 are waiting to have their applications for passports granted. In order to cope with the rush, Romania's foreign minister opened two new consulates in the provincial cities of Balti in the north and Cahul in the south on Friday -- at the EU's expense.

Creeping Expansion from the East

In this manner, the EU, which is already suffering from enlargement fatigue, is stealthily being expanded from the east -- without a referendum or any agreements from Brussels, Berlin or Paris. The Moldovans are voting with their feet and marching into the EU's economic paradise -- through the back door.

Since the Alliance for European Integration -- a coalition formed by four political parties -- pushed the pro-Russian Communist Party out of power in Chisinau in 2009, Romania has accelerated its naturalization offensive in its small neighboring country. Bucharest has sponsored officials from Moldova's Foreign Ministry on courses on Euro-Atlantic integration and it pays for the translations of EU laws. Even though Romania itself has been hard hit by the financial crisis, the nation has granted generous loans to its neighbor in the past year. The barbed wire along the border has been taken down and, since autumn, Moldovans living within a 30-kilometer radius of the border have been able to visit Romania without a visa.

Romanians and Moldovans may live in two separate countries but, as Basescu says, "We are one people and this people has a right to unity and a future together." He dreams of "Romania Mare" -- which, translated into English, means the ressurection of "Greater Romania" with the borderes that existed in 1940, which also included Moldova. At the time, the smaller country, formerly known as Bessarabia, was ceded to the Soviet Union as part of a German-Russian Molotov-Ribbentrop Pact. After the fall of the Soviet Union, Romania became the first country to recognize Moldova's independence in 1991 -- even though Romania remains reluctant to accept "the border that Hitler and Stalin drew" along the Prut River even today.

Moldova's new government is not averse to these Romanian advances, either. Of the 53 members of the governing coalition, nine have a second passport that is Romanian and 11 others have applied for one. And with Mihai Ghimpu as acting president of Moldova presently, there is a "Unionist" -- as the advocates of reuniting Romania and Moldova are known -- as head of state.

Chisinau Mayor Dorin Chirtoaca, who is also Ghimpu's nephew, has also stated that, "Romania and Moldova are closely linked, like Germany and Bavaria." He says the idea that the two states were independent of each other was "an illusion of the Soviet powers."

However, the majority of Moldovans aren't attracted by the prospect of reunification with Romania, which, after Bulgaria, is the second-poorest EU member state. According to polls, two-thirds want to be part of the EU, but only 2 percent self-identify as Romanian.

As the tiler Denis Rotari, who is waiting in front of the Romanian consulate, puts it: "I want to go further West with this passport. I don't care about Romania." His cousin works in an abattoir in Madrid. And when Romania joins the Schengen zone, an area without border controls incorporating 25 European countries, in March 2011, hundreds of thousands of Moldovans with Romanian passports will finally get free entry to the EU.

In the meantime, Brussels has also become aware of the stream of Moldovan migration. Right-wing populist politicians are exploiting the situation. Andreas Mölzer, a member of the European Parliament from the right-wing populist Austrian Freedom Party (FPÖ) has already asked the European Commission, the EU's executive, to state what it could do to stop the Romanian drive.

Politicians in Germany have also been considering the development. "Germany has no cause for concern yet," explained Manfred Grund, a member of parliament with Angela Merkel's conservative Christian Democratic Party and also an authority on Moldova. "Most are moving to Italy and Spain."