A new book about Spain's Queen Sofia has caused an uproar among gays and lesbians because of the monarch's sniffy opinions regarding pride parades and gay marriage.

Leaks from her new biography, The Queen Up Close, appeared in the newspaper El País on Thursday, and the normally reticent queen surprised many people by opening her mouth about political matters. 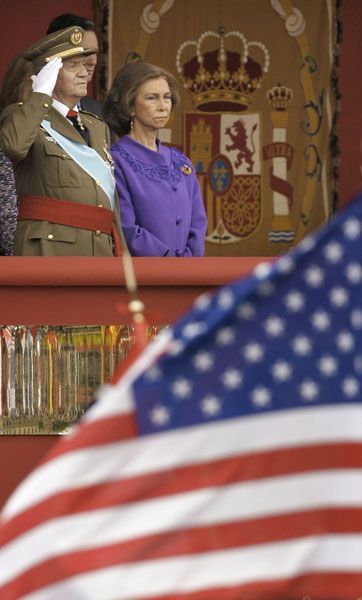 "I can understand, accept and respect that there are people of other sexual tendencies, but should they be proud to be gay?" she says in the book by journalist Pilar Urbano, which is officially published on Sunday, her 70th birthday. "Should they ride on a parade float and come out in protests? If all of those who aren't gay came out to protest we would halt traffic."

She also objected to the term "gay marriage," although the Spanish parliament legalized same-sex marriages in 2005.

"If those people want to live together, dress up like bride and groom and marry, they could have a right to do so, or not, depending on the law of their country," she said, "but they should not call this matrimony, because it isn't. There are many possible names: social contract, social union."

Antonio Poveda, head of a rights group called FELGTB (the State Federation of Lesbians, Gays, Transsexuals and Bisexuals of Spain), expressed "tremendous surprise" at the queen's opinions. "It is unprecedented that the palace, which usually never comments on social issues, now has to vent about one group of citizens who have been discriminated against in the past," he said in a statement.

The queen's opinions also hewed to the line of the Catholic Church on abortion and the question of religion in schools. Religious instruction was necessary at "at least to a certain age," she said. "Children need an explanation of the origin of the world and life."

And the queen tells a story about a conversation with Fidel Castro -- though the gossip about Cuba's former president is disappointingly mild. Sofia says she asked him why he couldn't open Cuba, just a little, to outsiders. He answered that small liberalizations would lead to larger liberalizations in the Cuban system.

But Queen Sofia expressed sympathy for US Senator Hillary Clinton and her recent bid for the White House. "They make her out to be an ambitious woman who uses her husband's influence to her own benefit," she said in the book. "The poor thing must have suffered a great deal."