He is 81 now, and has trouble speaking at times, but Helmut Kohl doesn't need many words to say what he thinks. He still receives guests and he likes to hear first-hand about European policy. Kohl is the only living Honorary Citizen of Europe, and he carries that title with pride. Recently, Horst Seehofer, the leader of the Christian Social Union, the Bavarian sister party to Kohl's Christian Democratic Union, dropped by for a cup of coffee. Jürgen Stark, the chief economist of the European Central Bank, has also looked in at Kohl's home in Oggersheim in south-western Germany. Kohl was particularly pleased that the former president of the European Commission, Romano Prodi, found time to come for a chat.

Kohl is well-informed about what is going in Europe and his judgment is sharp, especially regarding Angela Merkel. Kohl believes his political legacy -- the euro and European unity -- is in danger, and he is not just blaming the policies of the Greeks and Portuguese, but Merkel as well. What the chancellor is doing is "very dangerous," Kohl recently complained, according to one visitor. Then Kohl added: "She's destroying my Europe."

Kohl reacted to the original, German version of this article by stating in an interview with Bild newspaper published on Monday that the comments ascribed to him were "totally fabricated." In the interview, he went on to say Merkel's predecessor, Chancellor Gerhard Schröder, was partly to blame for the crisis because he had agreed to a softening of the Stability Pact on fiscal discipline in the euro zone, and had allowed Greece to join the euro in the first place.

Kohl also said in Bild: "It is true that I -- like many people -- am worried about the development in Europe and of the euro. I also see it as urgently necessary that the supposed euro crisis isn't regarded and discussed as a structural crisis of the euro per se, but as what it is: The result of homemade mistakes and challenges for both sides -- Europe and the national states."

The CDU's European policy is going through rough times. It used to be at the very heart of the conservatives' agenda. They were more emotional about Europe than most other issues. Post-war Germany's first chancellor, Konrad Adenauer of the CDU, worked with French President Charles de Gaulle to lay the foundations for a united Europe. It was intended as the answer to the two world wars; Helmut Kohl went on to forge the path to the euro single currency and to EU's eastward expansion.

Europe was a matter of faith for the CDU. The party has always been astonishingly quick to adjust its policies to the mood of the public but whenever it came to European unity, CDU chancellors risked taking unpopular decisions. In its 2007 policy manifesto, the party declared: "The CDU has always promoted European integration with passion."

That passion has evaporated. No CDU government leader has been cooler towards Brussels than Angela Merkel. To her, Europe isn't a question of war and peace but of euros and cents. Her policy so far has consisted of cheerless repair work, of plugging holes and putting out fires.

To be sure, one can't accuse Merkel of having been stingy so far. In the end, she signed up to all the aid pledges and guarantees for the ailing euro member states. Germany's share of the bailouts and the euro rescue fund already amounts to €140 billion. If the German parliament approves the European Stability Mechanism in autumn, Berlin will have to inject an additional €22 billion in cash to Europe's rescue effort.

But after all the patch-up jobs, there are increasing calls in Merkel's party for a fundamental statement on Europe. Where does Merkel want Europe to go? Does the crisis offer a chance to finally lead Europe into a political union, as Finance Minister Wolfgang Schäuble believes? Or will Merkel give in to the populists within the Bavarian CSU party who see Brussels as a bureaucratic monster that sucks in ever more powers?

The chancellor's indecisiveness is infuriating her party. First she declares Germany's fate is tied to the survival of the euro. Then she claims the Spaniards and Greeks don't work hard enough and complains that the German taxpayer has to bail them out. It's unclear whether she's trying to be stateswoman or queen of the tabloids.

Senior CDU members vented their frustration at a recent meeting of the party leadership. The governor of the state of Hesse, Volker Bouffier, addressed Merkel directly and said that after all the technical debate about saving the euro, a few fundamental words were needed about the future of the EU. "Europe is a political project. It is far too important to be left to the ratings agencies," said Bouffier.

Many in the CDU see a danger that the party, which has shed its skin so often under Merkel, is now also at risk of gambling away its European political identity. Finance Minister Schäuble is particularly skeptical about the chancellor's actions in this respect. He refrains from uttering a word of criticism in public. But he allows himself to be feted in Brussels as the German government's "last European" -- that in itself amounts to hidden criticism of the chancellor.

For Schäuble, the euro crisis is an opportunity to finally realize his plan for a political union. "Europe is like a bicycle. If you stop it, it will fall over," he said in a keynote speech in Paris in December, quoting the great European Jacques Delors. Schäuble never believed that a common currency could work without political cooperation. He has been pushing Merkel in this direction behind the scenes, but she has been hesitating and dithering. "She must take a risk for once," Schäuble recently sighed during a conversation with aides.

Schäuble hopes that the pressure coming from the CDU will force Merkel to take action. Economic experts within the party say Merkel's lack of a plan for the euro will do further damage to the single currency. The German government, they say, is too passive on Europe. There has also been criticism of Merkel's tendency to ignore the smaller EU nations and to strike European deals with French President Nicolas Sarkozy. Their meeting in the French resort of Deauville last October, at which they agreed on changes to the system for punishing nations that break the euro's deficit rules, was a case in point. "I don't think the beach walk in Deauville is necessarily a model of how one should solve European conflicts," said Luxembourg Prime Minister Jean-Claude Juncker.

But Merkel's actions show she doesn't want to pull Europe towards a political union. Berlin criticized Denmark's recent reintroduction of border controls, but it refused to leave it up to the European Commission to decide in which situations internal European border checks could be temporarily reintroduced.

Merkel is also partly to blame for the fact that Europe still lacks a strong international voice. Two years ago she agreed to the appointment of Belgium's Herman Van Rompuy as President of the European Council and Britain's Catherine Ashton as High Representative for Foreign Affairs and Security Policy. The two pale politicians have become a symbol for the fact that glittering job titles don't guarantee influence or respect.

Merkel's advisors argue that many EU countries already regard Brussels as too powerful. Euroskepticism is on the rise in the Netherlands, for example, where the government is tolerated by right-wing populist Geert de Wilders. Denmark and especially Britain are also becoming increasingly critical of Europe.

Fear of the Electorate

But that is only half the truth. Merkel is also afraid of German voters. Rarely has Europe been as unpopular with German citizens as it is now, and getting people to accept the need for unpopular policies has never been Merkel's strong point. Her background growing up in East Germany is a further factor -- the European euphoria of her western CDU colleagues has always been alien to her.

Merkel doesn't openly voice her skepticism -- that would lead to a lasting rift with the pro-Europeans in her party. She prefers to hide behind legal arguments. She regularly reminds fellow party members of the limits placed on European integration by the Federal Constitutional Court's ruling on the Lisbon Treaty. Her hands are tied, she says.

But the court only called for a strengthening of the German parliament's say in drafting EU law. It approved the essence of the Lisbon Treaty, which eased decision-making in the EU and established the jobs of EU president and foreign minister.

Pro-Europeans in the CDU argue that the highest German court would never dare let the project of European integration founder on judicial issues.

The CDU's Bavarian allies share the chancellor's objections. CSU party leaders have been warning against passing too much power to Brussels, just like they did in the 1990s, when then-CSU leader Edmund Stoiber tirelessly railed against the introduction of the euro. But that amounted to little more than beer hall talk which had no impact because Kohl remained faithful to European integration.

Merkel's lack of vision for Europe allows the CSU's euroskepticism to resonate more strongly. The pro-Europeans in the CDU are worried that the CSU's rhetoric could soon become government policy, and are pleading with the Bavarians to drop their populist stance in EU affairs. Ironically, they are getting help from Edmund Stoiber, of all people. The former Bavarian governor has become a staunch European since 2007 when he was appointed to head a unit tasked with reducing bureaucracy on behalf of the Commission.

Stoiber recently warned against a "renaissance of nationalism" and uttered a sentence that can be read as criticism of Merkel. "At the moment there is no one who has an overall European perspective," he said. 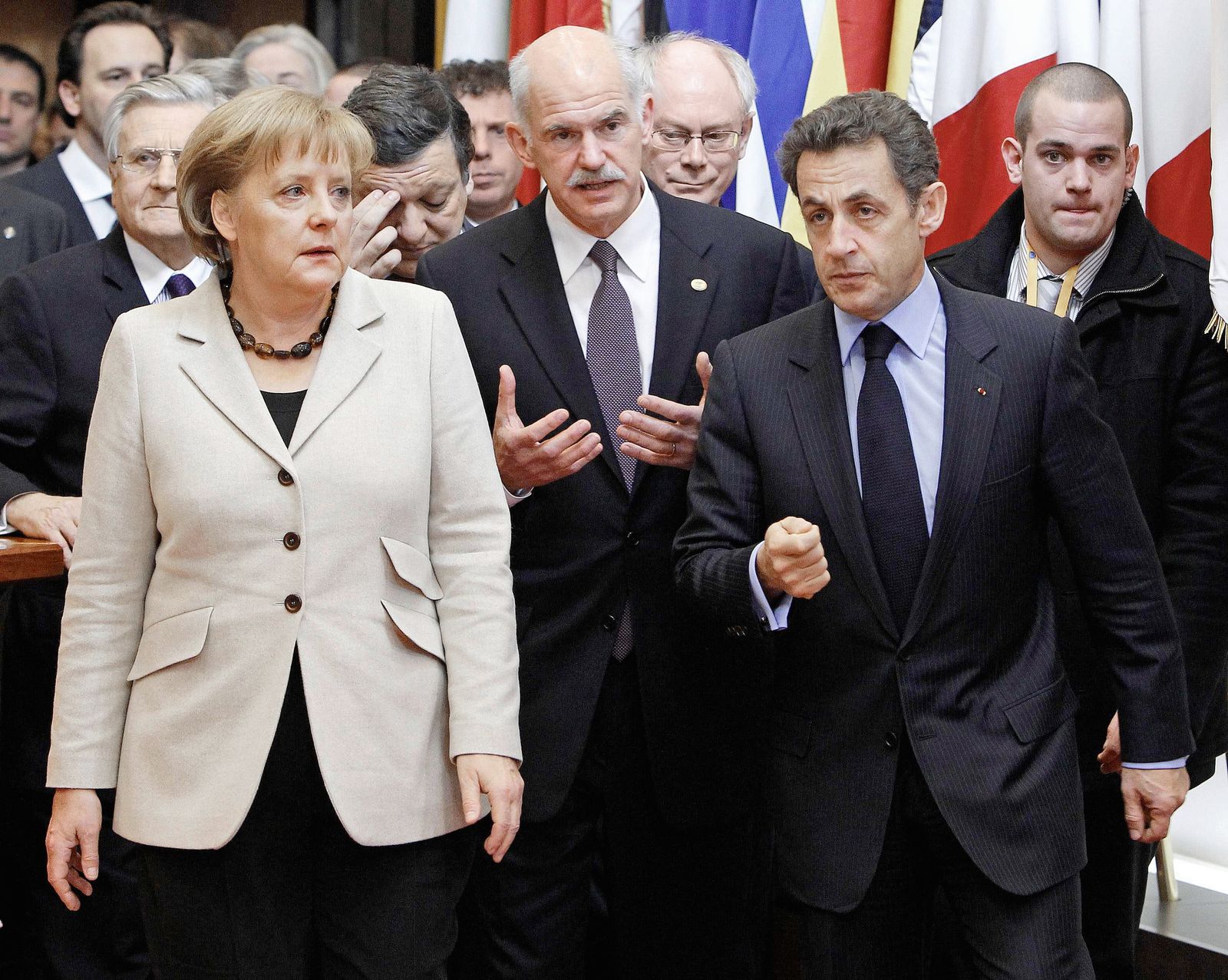