Bialowieza Forest is one of the last primeval wildernesses in Europe, 1,500 square kilometers (580 square miles) of untouched nature on the border between Poland and Belarus. A designated UNESCO World Heritage site, it is home to elk, wolves and bison, and many trees that are more than a hundred years old.

Nevertheless, clear-cutting has been underway in the forest for months, with tens of thousands of trees having been felled this year alone. The European Commission is in possession of satellite images that document the devastation. This ancient forest is shrinking every day.

Cutting down the forest's mighty trees is not only a violation of nature but also a challenge to the legal authority of the European Union. In July, the European Court of Justice issued a temporary injunction, ordering Poland to stop large-scale logging in the conservation zone immediately. The court will hold a second hearing on the case in late October. But the Polish government is undeterred and the environment minister has said the logging will continue.

Now, the Bialowieza Forest will even be a focus at this week's EU summit on Thursday and Friday. Germany has placed the issue of rule of law in the EU on the agenda, not only because of the illegal logging underway on the bloc's eastern border but also because defiance of EU law has become a general problem. On Wednesday, Merkel will be raising the matter of Poland's recalcitrance at dinner with Donald Tusk, President of the European Council. "Fundamental issues are at stake," says a German government official.

The move marks a departure, particularly when it comes to Poland. Thus far, Merkel and her government had gone out of their way to avoid any direct criticism of the Polish government. Even its plans to curtail the independence of judges failed to elicit critical comment from Berlin. In order to avoid testing Germany's historically fraught relationship with its neighbor, Berlin opted to hide behind the European Commission, which is threatening to intensify its rule of law procedure in launched against Poland last year.

The German government now wants to show countries like Poland and Hungary that they are eroding the pillars of the EU by violating its legal principles. Commissioner Günter Oettinger, from Germany, has called for sanctions to be applied to notorious lawbreakers, while Luxembourg's foreign minister, Jean Asselborn, has also argued for tougher penalties. The rule of law is "the cement of the EU," he has said.

The issue could spiral into a dispute over fundamental principles. The EU is conceived as a legal community and its agreements are effectively international treaties. The job of the Commission is to ensure they are upheld while the European Court of Justice passes judgment in cases where they are not.

So much for the theory. In practice, many EU member states take a flexible approach to what's legal and what's illegal in EU Law. Even the Commission, under President Jean-Claude Juncker, does not always comply with the rules, because it sees itself as a "political commission." All are equal, but some are more equal than others is Juncker's operating principle, which annoys all the countries that feel at a disadvantage within the EU, chief among them the smaller Eastern European states.

Frustration over this two-tier system runs deep. The way that the Hungarian Foreign Minister Peter Szijjártó tells it, the European community of law is a straitjacket, a means to hamstring his country. "This ruling is outrageous and irresponsible," he fumed when the Court of Justice recently dismissed the Hungarian government's complaint against Brussels' right to force member states to take in asylum seekers. "Politics has raped European law."

The man to whom the remark was addressed is immune to such aggression. His job is to "guarantee the principle of justice" in difficult times, says Koen Lenaerts, president of the European Court of Justice. His spacious office is on the seventh floor of the Court of Justice building on the Kirchberg Plateau in Luxembourg. The world outside its tinted windows seems far away while shelves of legal tomes surround Europe's senior-most judge like a wall.

But the animosity towards his court has not passed Lenaerts by. The "variety of crises" is reflected in pending proceedings, he says.

Perhaps the most controversial recent case focused on the binding distribution of refugees that EU interior ministers approved in September 2015 over the opposition of Hungary and Slovakia, among others. The European Court of Justice ruled that the decision had followed EU law and was thus valid.

As far as Lenaerts is concerned, the issue is resolved. He can understand that countries who feel adversely affected by the court verdict need to express their disappointment. "That is not in itself a problem. But they must accept the verdict. Now they need to abide by the council decision."

But this isn't just about one verdict that Hungary doesn't like, or one order that Poland is ignoring. In Warsaw, the Law and Justice party is intent on hollowing out the very foundations of the rule of law. Were its controversial bills enacted, all the judges on Poland's Supreme Court could be replaced en masse. The European Commission has launched an infringement procedure against Poland and the next step could be the imposition of sanctions in accordance with Article 7 of the Lisbon Treaty. If the situation worsens, Poland could end up forfeiting its voting rights in the EU.

For its part, Poland refutes the commission's right to intervene in an ongoing legislative process. A letter sent by the Polish government in late August to the European Commission and seen by DER SPIEGEL states that the commission has its facts wrong and asks the barbed question: "Did the commission get its information on the judicial reform from the media?"

The tone of the letter is proof enough that the European Commission has lost its authority as a credible champion of law and order, at least in parts of Eastern Europe. Even less belligerent Eastern Europeans are riled by the tendency of Brussels and countries such as Germany to behave like the guardians of European values, when they themselves break the rules too.

Peter Györkös, the Hungarian ambassador to Germany, says that the main reason the EU is in crisis is because "we have eroded the rules of our two greatest achievements with exceptions and violations: the common currency and the single market guaranteed by the Schengen Agreement - in other words, our way of life and our economic model." He blames the European Commission, which he says has relinquished its role as the "guardian of the treaties."

He has a point. Member states have violated the Stability and Growth Pact, signed just 20 years ago, over 110 times. Only once has this resulted in sanctions. Hardly any of those violations have left behind deeper marks than Germany's repeated flouting of the rules in the early 2000s. For two years, Berlin fought against reluctant partner countries and the initially stubborn European Commission until then-Chancellor Gerhard Schröder (SPD) got what he wanted. Germany, of all places, a country which needed the Growth and Stability Pact to sell the common currency to a skeptical population, had weakened the rules.

Valdis Dombrovski, the Latvian deputy president of the commission, is reminded of just how indelible that loss of authority is whenever he warns heads of state and government to abide by EU treaties.

At the G-20 summit in Brisbane in November 2014 he had a breakfast meeting with Italy's then-Prime Minister Matteo Renzi and Commission President Jean-Claude Juncker. Dombrovski was at pains to convey to Renzi that legal proceedings against Italy for its breaches of the Stability Pact were unavoidable. It could even work to Italy's advantage, he said. Once proceedings had begun, Italy would, for a while, be able to run up even more debt without falling foul of fiscal rules.

But the Latvian was fighting a losing battle. During the European Parliament election campaign earlier that year, Juncker had made it clear that the rules of the pact should be seen more as non-binding guidelines. Dombrovski's words of warning to Renzi in Brisbane were water off the prime minister's back. He knew he had nothing to fear from Dombrovski's superior.

And he was right. Italy was granted more time to introduce fiscal reform, as was France. To this day, there have been no real repercussions. If anyone asks Juncker why the commission is so lenient about France's nagging budget deficit, they get the flippant reply: "Because it's France."

Leading European politicians fear that this cavalier attitude to EU law could end up destroying its very bedrock. "The threat to the rule of law in some European countries could send the EU into an existential crisis in the same way that some countries' debt accumulation threatened the euro," says Romanian MEP Siegfried Muresan. Luxembourg's Foreign Minister Asselborn feels the same. "It's close to the bone," he says.

Allesborn, the EU's longest-serving foreign minister, presided over the meeting in September 2015 when interior ministers and immigration experts reached their controversial decision on compulsory refugee quotas. He doesn't think that the intractable stance on the refugee crisis taken by Hungarian Prime Minister Viktor Orbán can be compared to breaches of the Stability Pact. "Not all rules are the same," says Asselborn. "With the refugee crisis, we are not talking about technical details and percentages, but about people."

Hitting Where It Hurts

Were Asselborn to get his way, breaches of the rule of law would have immediate financial consequences for the countries in question. He is planning to propose new regulations at the next Multiannual Financial Framework negotiations for the EU's seven-year budget, which will be adopted in 2020. "We should reduce European Structural Fund payouts to countries that flout the basic rule of law," he says. It's an idea that many in Brussels support. Günther Oettinger, European budget commissioner, would like to see funds distributed only to countries that play by the rules. As it says in a strategy paper released by Oettinger's office, there is a "clear relationship between the rule of law and the efficient implementation of private and public investments supported by the EU budget." The general thrust of the proposal is clear, given that the main recipients of EU financial injections are Eastern European countries.

Countries such as Hungary see it for what it is: a declaration of war. Györkös, the Hungarian ambassador to Germany, points out that his country is the only one in the EU to have been punished for flouting the bloc's budget rules. In March 2012, the EU temporarily suspended payment to Hungary of subsidies worth 500 million euros earmarked for economically depressed regions. "To us this was proof that not all states are equal," he says. 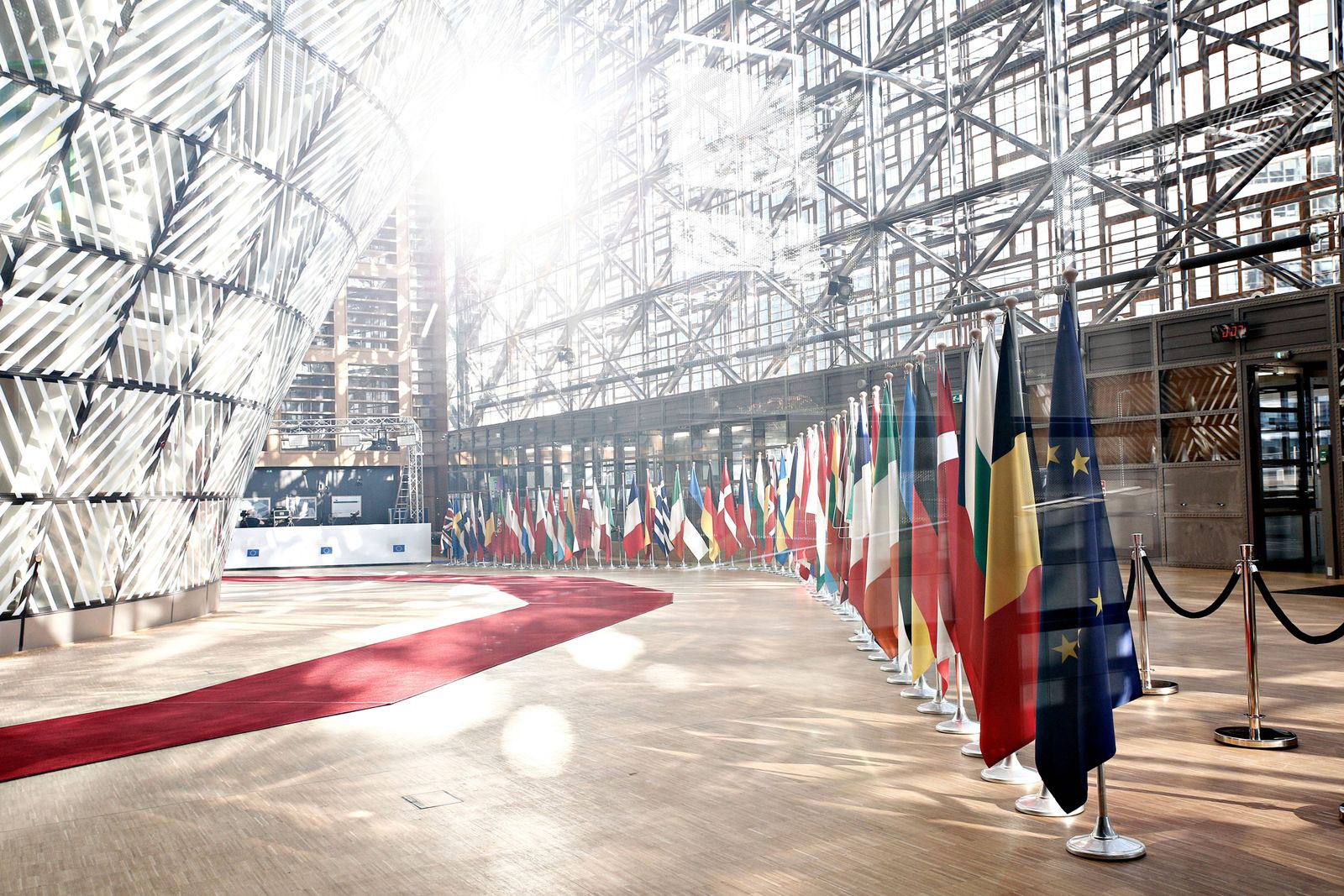 The European Council in Brussels.