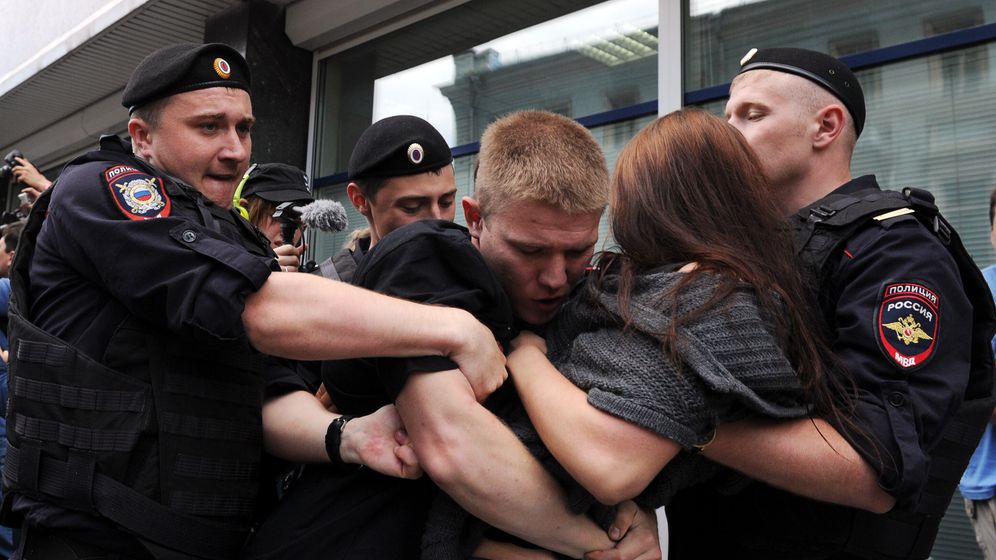 "Russia is a country of traditional values," says Sergei Zheleznyak, the deputy speaker of Russia's parliament, the Duma, and a member of President Vladimir Putin's United Russia party. And of this he is quite sure. "More than 90 percent of the population supports the ban on homosexual propaganda among minors," he asserts.

The figure he cites is only slightly exaggerated and comes close to the sad reality in present-day Russia. Indeed, animosity toward gays in the country is immense. The federal law against "propaganda of non-traditional sexual relations," which was approved on Tuesday in the Duma's lower house, is the manifestation of a long-rampant culture of homophobia fueled by the state-controlled media.

Under the new law, it is punishable by fine to speak openly about gays and lesbians among young people, which effectively outlaws gay-pride marches, speeches and the like. The law passed 436-0, with only one abstention, according to the Interfax news agency.

As usual, the Moscow police came down hard on gay-rights activists who demonstrated against the controversial law in front of the parliament on Tuesday morning. But this time they were also joined by ultra-Orthodox counter-protesters who clashed fiercely with the demonstrators. Jeering young people threw rotten eggs and kicked a demonstrator who had already fallen to the ground.

'Harmful to the Psyche'

According to the Levada Center, a respected Russian opinion research institute, 42 percent of Russians favor either supression or isolation of gays and lesbians. Five percent say they would have nothing against a "liquidation" of sexual minorities.

The bill does not outlaw same-sex relationships as such, emphasized Duma speaker Zheleznyak. Rather, it's about protecting children and young adults from influence, Interfax reported him as saying. Minors are not capable of dealing objectively and critically with information "that could be harmful to the psyche and give them a distorted idea of interpersonal relationships," Zheleznyak siad.

Critics see the law differently. "We take the protection of minors just as seriously as the government. We condemn any form of sexual interference," says Vladimir Voloshin, the editor of Russian gay magazine Queer. "But we don't dispense propaganda. We don't go to schools or kindergarten in order to convert young people." he says, "That is absurd."

Voloshin is directly affected by the new legislation. Shortly after a similar provision was entered into law in St. Petersburg, he says he lost a quarter of his readership in the city because local kiosks refused to carry the publication. "No one bought advertising, no one wanted to give us any more credit. We ultimately had to shut down our print edition," says Voloshin. Since then, Queer has only appeared online.

"The only ones pushing propaganda are the makers of this new law," argues the journalist. Gays and lesbians are discredited as second-class citizens who cause harm to the populace. "When the state takes action against homosexuals," Voloshin says, "it means that our civil society is in poor shape."

In Constant Danger of Attacks

Homosexuals in Russia are repeatedly the targets of brutal and even fatal violence. Just this month, the deputy director of an airport on the Pacific peninsula of Kamchatka was killed and his corpse was set on fire, allegedly because he was gay. "It is one of the perverse consequences of the new law that criminals claim to have acted out of aversion to gays, because their lawyers assume that it will be considered as a mitigating factor during sentencing," said Voloshin. "The worst part is, it works."

Young gays and lesbians in Russia are as angry as they are afraid: How will the new legal requirements ultimately be enforced? Is it forbidden to hang a rainbow flag? What will this mean for AIDS prevention or psychological counseling for LGBT adolescents? The bill provides for heavy fines: Violations call for amounts between €100 ($133) and €11,700, an enormous sum that corresponds approximately to an average annual salary.

Vladimir Lukin, Russia's commissioner of human rights, warned that the ban could lead to "human victims and human tragedy." Journalist and activist Yelena Kostychenko assumes that the suicide rate among gay teenagers will continue to rise. Internet sites could now be blocked without a court order. "We will no longer be allowed to report on homosexuality -- like in Iran," said Kostychenko.

On the Internet, an initiative called "The Children-404," organized by journalist Lena Klimova, calls for understanding and tolerance of LGBT youth in Russia -- but, above all, it asks for recognition. In a series of photos, young gay Russians face hold posters in front of their faces. "I refuse to be invisible! Love is stronger than hate," reads the sign of one pictured participant in Moscow.

As of yesterday, such an action will carry a fine. Like the one St. Petersburg resident Nikolai Alexeyev had to pay in May -- the equivalent of €130 because he held up a sign reading: "Homosexuality is not a perversion."