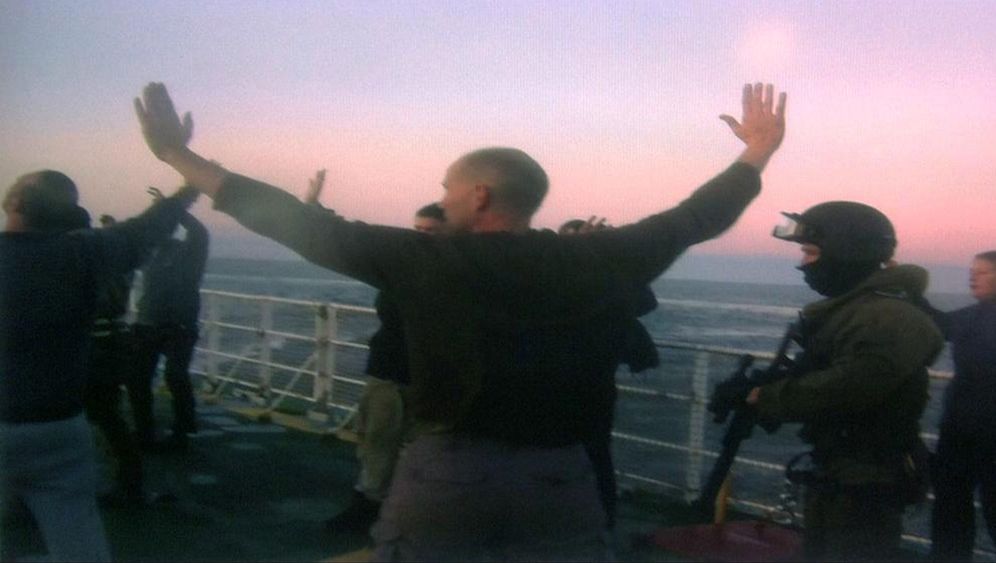 Punctuation can change the world. In the chaos of the Russian Revolution of 1905, typesetters in Moscow went on strike because commas weren't included when their work was calculated.

Now punctuation is once more of extreme importance for Russia, this time in the form of a semicolon. Such a punctuation mark, as used in a 16-year-old diplomatic note, could once again be cause for an argument with geopolitical ramifications.

On Wednesday, the Hamburg-based International Tribunal for the Law of the Sea must deal with the case of 30 Greenpeace activists arrested in the Russian port of Murmansk six weeks ago. From their ship Arctic Sunrise, they had attempted to board an oil drilling platform owned by Russian company Gazprom in the Arctic Ocean. The Netherlands, the country under whose flag the Arctic Sunrise was sailing, has long demanded that the icebreaker and its crew be freed. The ruthless actions of the Russian security forces in the Arctic had interfered with the right to freedom of navigation, the Dutch say.

It is a matter of prestige for Russian President Vladimir Putin and his diplomats. The Foreign Ministry in Moscow has said it will not take part in Wednesday's proceedings because it argues that the maritime tribunal has no jurisdiction on the matter.

And that is where the punctuation comes in. Whether case number 22 of the seldom-used international court finds for the environmentalists depends very much on whether a Russian legal caveat from 1997 is in effect. In its note of ratification for the UN's Convention on the Law of the Sea, Moscow held that -- among other things -- there should be no judicial interference in "disputes concerning law enforcement activities in the exercise of sovereign rights;".

Reducing an International Dispute to a Semicolon

In maritime agreements such reservations are allowed -- but in terms of "disputes concerning law enforcement activities in the exercise of sovereign rights" only when they relate to fishing or marine research, neither of which was the case on the Arctic Sunrise. In their note, Russian diplomats simply fudged this important limitation away. Where a comma should have been, a semicolon instead appears, separating the exception from the fishing and research caveats.

It is a legal art to reduce international relations during a dispute to a punctuation mark. What is not in dispute is that a caveat, which removes an important subordinate clause, is not allowed under international law. Doris König, professor of maritime law and president of the Bucerius Law School in Hamburg, thus believes that "Russia is unlikely to get away with its caveat at the maritime tribunal."

But that means stoking a row. If the court finds for Greenpeace in case number 22, that will set the stage for further escalation: The verdict will have been decided with no representation from the Kremlin present. In all likelihood, that would not stop the Netherlands from claiming at least a partial victory -- with Russia being told to release some or all of the activists on bail.

That is because any verdict emanating from Hamburg will initially be only a provisional decision. Later arbitration will determine whether the law of the see covers everything that happened on Sept. 18 and 19 in the Arctic Ocean.

A Russian Federal Security Service task force had already been awaiting the Arctic Sunrise on the Prirazlomnaya oil rig. As rubber dinghies were launched from the ship and two activists began to board the platform, the secret service agents intervened. They pursued the Greenpeace vessel with helicopters and boarded it from the air.

A dispute over whether Putin's henchmen were allowed to carry out their actions could become complicated. That the Russian authorities are themselves not completely sure is illustrated by the fact that the initial -- and legally absurd -- charges of piracy laid against the Greenpeace activists were downgraded to "hooliganism," a catch-all term widely used by the former East Germany.

Whatever the exchange of accusations during the preliminary proceedings of the tribunal, one thing is clear: It is completely unreasonable to detain 30 people for weeks in appalling conditions just because they tried to reach an oil rig with small boats. But just as likely as an order from the court for their release is for Russia to react by ignoring that order. This, in turn, could not be tolerated by the Dutch -- and Amsterdam would then ask the European Union for political support, perhaps in the form of sanctions against Russia.

Nothing would be more inconvenient for Brussels than that. At the heart of the problem is Gazprom, the Russian energy giant which provides much of Europe's gas supplies, and with which Europe is so happy to have finally established an orderly business relationship. Sanctions against Gazprom? No one knows how cold the winter will be.

International law experts, meanwhile, still hope that Russia will submit to the Hamburg court, among whose 21 judges is one Russian. Vladimir Vladimirovich Golitsyn has served on the bench there for so long that it would be his turn when his colleagues next elect a new president.

And that election will happen in the coming year.