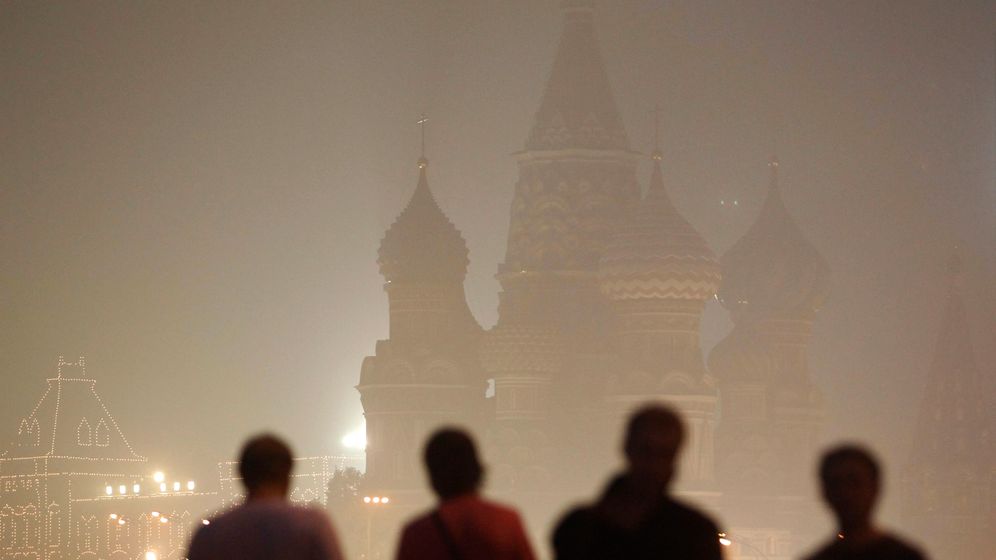 The wind had been merciful during the night. By Thursday morning the thick, acrid smoke over the center of the Russian capital had cleared -- just a little. "Look, you can even see the sky!" said newspaper vendor Natasha Ivanova. The previous day at this time she couldn't see further than 100 meters beyond her little kiosk in front of the Paveletskaya metro station.

The city's high rises remained cloaked in a wall of smog, and hot gusts of wind blew down the streets. Knowing that at any moment another cloud of burning smoke could descend upon Moscow, Natasha carried one of the protective face masks that can be purchased at local supermarkets in her bag. The fires around the city and across large parts of Russia are still not under control.

On Wednesday, smoke from the massive Russian forest fire catastrophe that has engulfed the country reached the capital. The worst smog the city has seen in decades engulfed the city of 10 million like a white smoke screen. The smog even seeped into the metro stations deep underground. The mass-circulation newspaper Komsomolskaya Pravda described apocalyptic scenes reminiscent of horror movies.

People pushed masks and wet cloths against their mouths and noses, even though this did little to protect them from the poisonous air. Doctors have warned that the air pollution is 10 times worse than normal. And the concentration of toxic carbon monoxide has reached levels that can be dangerous even to healthy people.

The health authorities have urged Muscovites to stay at home and wash out burning eyes with camomile tea. Russia's chief medical officer, Gennadi Onishenko, advised employers to let their employees stay away from work wherever possible.

But such advice isn't very helpful to newspaper vendor Natasha. The woman, in her mid-30s, has to set up her stall even in the midst of thick smog. If she doesn't work, she won't be able to pay her rent. She has read warnings that within a few hours one can inhale as many toxins as those contained in 40 cigarettes. "That is terrible," the redheaded woman sighed. "But there is no getting away from it."

For almost 10 days fires have been burning in forests across much of Russia and, particularly in the region surrounding Mosow, in dried-out peat bogs. The fires have been increasingly impossible to contain.

On Wednesday night, around 172,000 hectares were still in flames; and by Thursday morning, the authorities announced that the area had increased to 190,000. The official death toll is at 50 people, and at least 500 people have been injured. Seven Russian regions have declared a state of emergency, and over 200,000 people are battling the fires -- most of them volunteers alongside a few thousand fire fighters and 10,000 soldiers. They are using heavy equipment to cut huge troughs into the ground in an attempt to stop the creeping fire.

The Russian government was able to announce on Wednesday that the nuclear research center near the city of Sarov, around 400 kilometers (250 miles) east of Moscow, was no longer in danger. The flames had come within 4,000 meters of the complex, where Russia's nuclear arsenal is still produced today.

Sergei Kiriyenko, head of the state nuclear agency Rosatom, said that any explosive or radioactive material had been transported away and that there was no risk of a nuclear disaster. However, around 90 oil refineries are still in danger and none of them have automatic fire extinguishers. The oil will have to be transported away from some of them as quickly as possible in order to avert a disaster.

For several days, the government avoided admitting just how serious the fires had become. Moscow only accepted aid from abroad on Tuesday, when fire-fighting planes arrived from Ukraine and Azerbaijan. Italy sent more on Wednesday. The fires have been caused by a heat wave that has hit Russia this summer. Since the beginning of July temperatures have constantly been well above 30 degrees Celsius (86 degrees Fahrenheit), and there is no prospect of cooler weather any time soon.

However, the Russian government shares at least some of the blame for allowing the fires to spread so quickly. During Vladmir Putin's presidency, the forestry service was practically dismantled. The 70,000 forest rangers who might have registered the fires and even been able to put them out had all been let go.

And the fire-fighting infrastructure has also been scandalously neglected. There are only 22,000 professional fire fighters in the whole of Russia, compared to more than 27,000 in Germany, a far smaller country. And there is nothing like the system of volunteer fire fighters, such as the one in Germany that encompasses 1 million people. In addition, Russia's fire-fighting vehicles and equipment are often outmoded. Many people in Russia's provinces have had to defend their villages and homes against the flames on their own, at times using their bare hands.

Prime Minister Putin was able to get a sense of the anger of many of the desperate victims when he visited the small industrial town of Vyksa last week. A furious crowd surrounded the politician and screamed for help. Putin promised to make sure that their homes were rebuilt as soon as possible. Later he announced that he would personally monitor the building work through a live video feed.

The prime minister also pledged compensation payments, in an attempt to quench this public anger. Relatives of those killed in the fires will receive around €33,000 ($43,000) while those who have lost the roof over their heads will get around €5,000 ($6,600). The pledge of compensation has prompted some Russian media to now warn that people might set fire to their homes in order to claim these payments.

President Dmitry Medvedev, meanwhile, has turned to the typically Russian habit of looking for the guilty parties. He has already dismissed high-ranging military officials, including the head of the navy's aviation arm, and at least seven other officers, for what he called criminal negligence after fires ravaged a military base. According to the Russian media, 200 helicopters and aircraft were destroyed in the blaze at the naval logistics base in Kolomna, 100 kilometers southeast of Moscow.

The state prosecutor's office is already looking into several case of negligence across the regions. The online newspaper gaseta.ru, which is usually critical of the government, bitterly commented on this process on Wednesday. "If it follows the usual Russian practice, then one can be certain that the top men in the state will not be taking any responsibility." 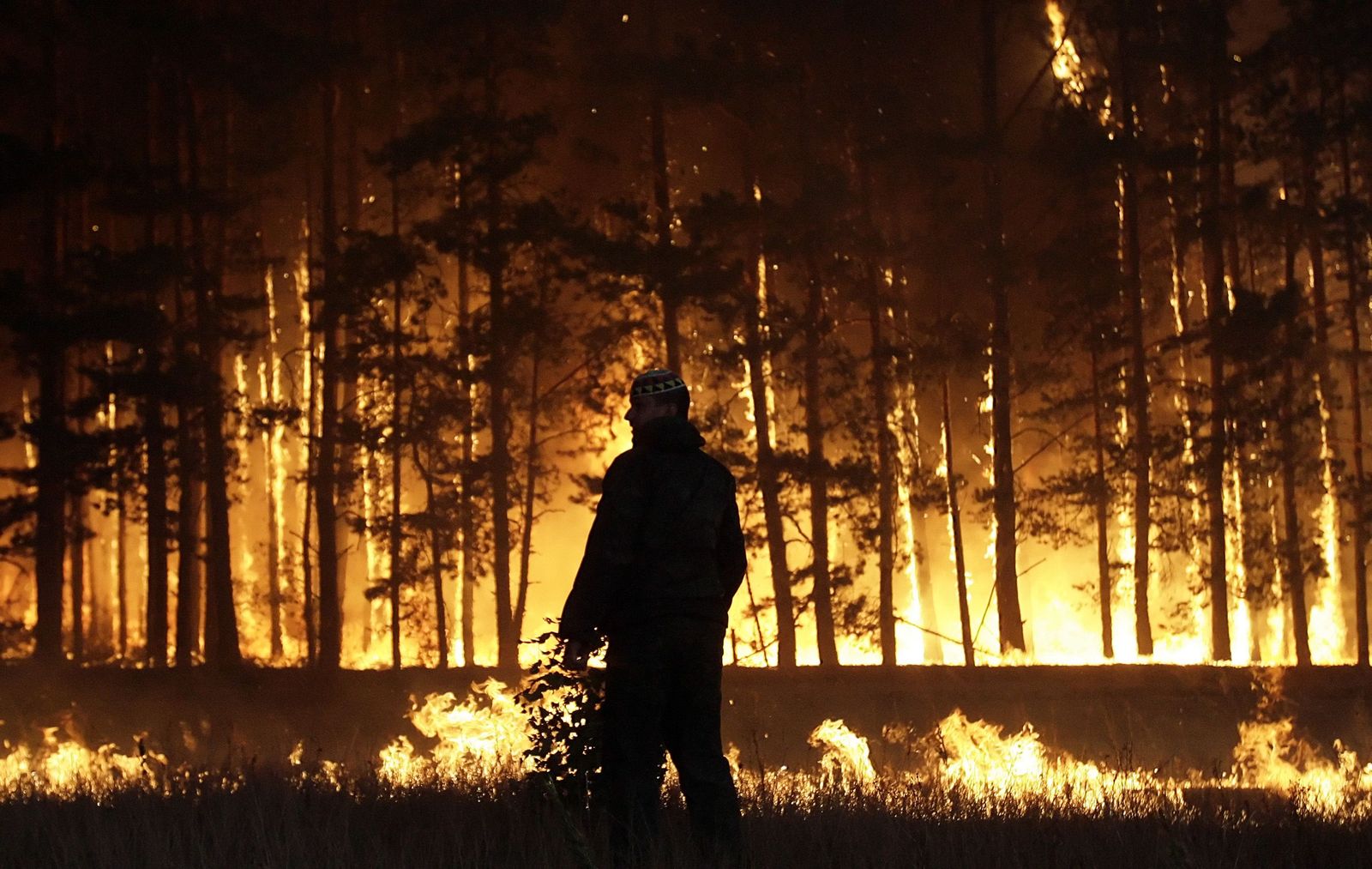