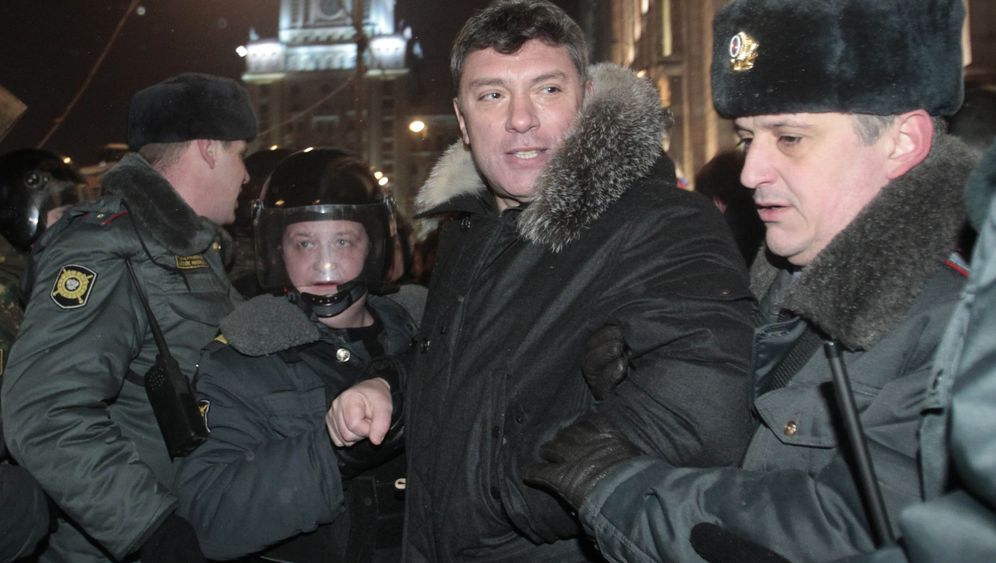 Photo Gallery: The Shadow of Putinism

SPIEGEL: Mr. Nemtsov, what exactly does an opposition politician do in a country that doesn't allow an opposition?

Nemtsov: One gives speeches in the dark, for example, which just happened to me recently. I was at a campaign event in Krasnodar, in southern Russia. The whole thing was supposed to be held in the local culture center. But then the building was suddenly surrounded by police units, troops from the Ministry of Emergency Situations and the Putin Youth. Then came the news that there was a bomb hidden in the building, and the lights were switched off. For the first time in my life, I had to give a speech in total darkness. It seems that is how afraid they are of us, but I still gave the speech, in the darkness of Putinism.

SPIEGEL: In 1997, you were the deputy prime minister and were regarded as a potential successor to then-President Boris Yeltsin. Today, you are a regime critic with no hope of gaining political office. Has this made you a bitter person?

Nemtsov: I'm happier than those who are in the Kremlin. I don't betray my principles, and I do what I believe in. But, as a member of the opposition, you have to be prepared for everything. You can be killed, end up in jail or be doused with ammonium hydroxide, which happened to me last New Year's Eve. Someone recently threw a toilet at my car from above, just like that. You're laughing, but this is no laughing matter. In democracies, the opposition sits in the parliament, but in authoritarian countries like Russia, it is locked out.

SPIEGEL: Are you disappointed by the West? Should it be doing more for the opposition in Russia?

Nemtsov: I don't believe in the export of democracy. We Russians must achieve freedom and democracy on our own, when we're ready for it. However, it does help us when the European Parliament backs up the opposition, condemns electoral fraud in Russia and criticizes the ban that was imposed on my party to participate in the parliamentary election next Sunday.

SPIEGEL: And yet you still encourage people to vote?

Nemtsov: We have launched a campaign under the slogan: "Vote out the government of thieves. Vote against them all." We have had 45,000 stickers printed. I have one on my car. And when I'm driving, people in the next lane use hand signals to let me know that they think: "That's great." Even police officers who stop me say to me: "Boris, what you're doing is the right thing."

SPIEGEL: At the convention of the governing party, United Russia, in late September, Putin essentially handed the office of the presidency to himself. How much longer will he be in power?

Nemtsov: Putin wants to govern for the rest of his life, and that means stagnation, degeneration and marginalization for Russia. Optimists believe that he wants to remain in office until 2024, while pessimists say it'll be until 2036. I'm an optimist, and I want him to leave as soon as possible. If you believe that a dictatorship in Russia is OK for Europe, you're mistaken. The closer your friendship with Putin, the more problems you're making for yourself.

SPIEGEL: And what should Germany do?

Nemtsov: Europe must decide between values and natural gas. For Germany, France and Italy, gas is apparently more important than human and civil rights, even if (German Chancellor) Angela Merkel feels differently deep inside. It's not that I'm calling for sanctions against my country. Instead, the West should take action against those who are responsible for the violation of human and civil rights. But Europe has no clear Russia policy. And Putin is cleverly taking advantage of this.

SPIEGEL: What exactly do you propose?

Nemtsov: An entry ban for government officials like the justice minister or the head of the election commission, who are engaging in electoral fraud, introducing censorship and destroying our judiciary as an independent institution. These people have real estate in the West, and they send their children to schools in London and Paris. They don't want to vacation in Uzbekistan, but in Monte Carlo and Biarritz. It would be disastrous for them if they could no longer do these things. That's why a blacklist would lead to Russia's democratization more quickly than any partnership agreements with the European Union.

SPIEGEL: Were you surprised by what happened at the party convention in late September?

Nemtsov: What surprised me was the arrogance. Two men made a decision for the people, for an enormous country. And members of this party jumped up, just like in the days of Stalin, and applauded everything they heard. I was indeed surprised by this cajolery and this contempt for fellow human beings. At the end of the day, the elections in Russia were essentially held on that day. Putin has only one problem left: How exactly is he supposed to explain to his subjects why they should still vote on Dec. 4? And then again in March? That's the grotesque face of Putinism.

Nemtsov: The repression was more drastic under Stalin, of course. I can travel or emigrate to the West today. I can express myself freely on the Internet and speak with SPIEGEL. People lead their lives as they please. This was not possible under Stalin. Putinism is the absence of political freedom coupled with personal freedom. In this sense, Putinism is progress compared to Stalinism. I can do as I please. But what I can't do is influence the balance of power. Russia deserves something better.

SPIEGEL: Putin can also point to successes. Russia has had a balanced national budget for a long time now. It has the world's third-largest foreign currency reserves, and the real incomes within the population have risen sharply.

Nemtsov: That's because of the high oil price, not Putin. It's the only reason he was able to increase salaries and pensions. The oil price was about $12 (a barrel) in March 1998. I was deputy prime minister at the time, and I dreamed of it going up to $20. I was certain that if that happened we would be living like the Kuwaitis. Today, $110 a barrel isn't even enough to provide us with a balanced budget. And the country's problems still haven't been solved: the poor healthcare and education system, and the ineffective police and military.

SPIEGEL: You forgot to mention corruption.

Nemtsov: I was about to get to that. In the Putin years, the costs of building a single kilometer of road increased tenfold. In 2000, a kilometer still cost $500,000 (€376,000), and today it costs $5 million. Why? Because of so-called kickback payments. Money flows and disappears, in all areas. Even Medvedev says that when Siemens CT scanners are ordered for Russian hospitals, they cost twice as much as they do in Germany. Medvedev, the president, says that Russia loses $32 billion a year as a result of bribes.

SPIEGEL: What caused Medvedev to fail?

Nemtsov: He failed because of himself. He was the weakest president Russia has ever had. He will also only be able to prevail as prime minister until the first crisis. Putin isn't a bad psychologist. Four years ago, he simply selected the most loyal and spineless politician, so that he would keep his seat warm until he returned. You know, normally the Kremlin has an arousing effect, even on weak politicians. Even when impotent office holders move into the Kremlin, they experience a political erection. But Medvedev didn't even get that.

SPIEGEL: Now you're being spiteful.

Nemtsov: Nevertheless, ultimately Medvedev isn't even a president, but merely a blogger. No one in Russia pays any attention to Medvedev when, for example, he says that freedom is better than bondage. Only the West falls for that.

SPIEGEL: Well, at least Medvedev met with the editor-in-chief of the opposition paper Novaya Gazeta. Putin wouldn't even have mentioned its name.

Nemtsov: But Medvedev also treated the constitution with contempt by having the president's term lengthened from four to six years. He enlarged the bloated bureaucracy, bringing it to 450,000 government employees. Corruption is on the rise, and bribes have increased drastically.

SPIEGEL: In June, the billionaire Mikhail Prokhorov, Russia's third-richest man, was elected to the leadership of a liberal party to collect pro-Western votes. Prokhorov later exposed the whole thing as a project managed by the Kremlin. Was he too naïve?

Nemtsov: Mikhail is an old friend of mine. He is a good guy. He thought he could change the system from within, as long as he didn't criticize Putin and Medvedev directly. But he was wrong. The Kremlin wanted to dictate to him which people he was to place on his list and which ones were to be removed. Mikhail had become nothing but a puppet, so he gave it up.

SPIEGEL: How is he today?

Nemtsov: I saw him recently. He is laying low and keeping quiet. If he had declared war on them, he would have suffered the same fate as (the jailed former Russian oligarch Mikhail) Khodorkovsky, or he would have had to move to London. That's why he's taking a break now. I suggested that he put my sticker on his Maybach, the one with which we call upon people to write "against them all" on their ballots. All he said was to leave him alone.

SPIEGEL: If someone who had fallen into a coma before Putin came into power in 2000 and woken up today, what would he think about this country?

Nemtsov: He would be surprised because, when he fell asleep, the Soviet Union was already a thing of the past, and now it has been partially resurrected. We live in a Soviet-influenced capitalist society, a mixture of Soviet misery and private companies that are being run successfully.