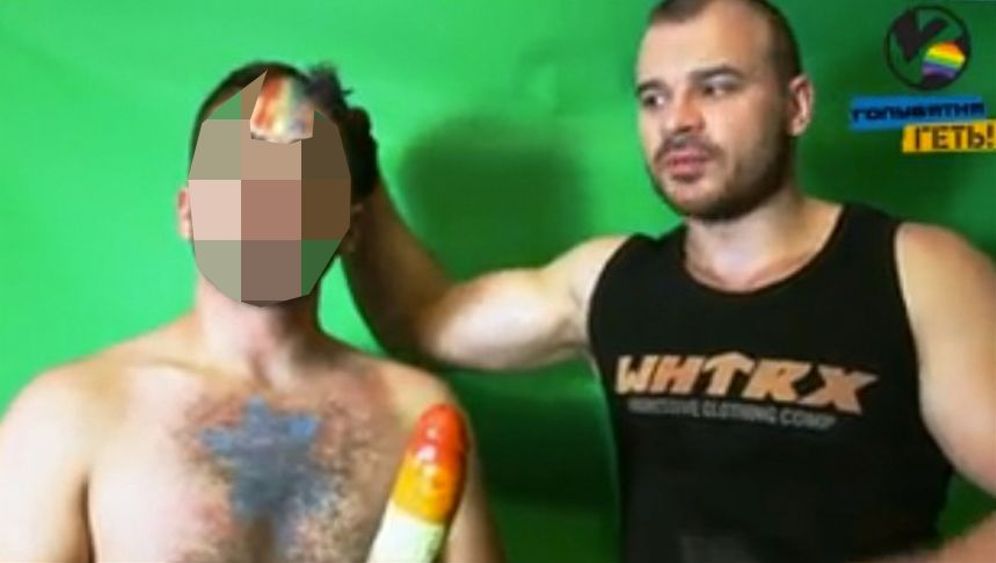 Maksim Martsinkevich, known as "Tesak" or "flick knife" by his comrades, does his best to look respectable with hip, frameless glasses on his profile on the Russian social network VK.com. He calls his campaign "Occupy Pedophilia" in the style of the "Occupy" protests against Wall Street and the banking industry by anticapitalist protesters.

In fact, Martsinkevich has little time for Occupy's left-wing ideals. Tesak is a notorious skinhead. For months now he has been posting video clips online that show him and his accomplices harassing gay men.

"Greetings, my young friends of extremism," Martsinkevich begins his videos, in which he lures gay men to apartments on dates and then abuses them. Among his favored routines is forcing victims to kneel before him naked as he shaves off their hair and paints a rainbow flag on their scalps. The rainbow flag is the symbol of the international gay rights movement.

In other videos, he has forced his victims to imitate oral sex with sex toys, or to call their acquaintances, university professors or employers to embarrass them. On occasion he has poured what looks to be urine over victims' heads. In one clip, two young men are forced to dance together half naked as one of them weeps.

"I Want to Kill, But I'm Not Allowed"

When Martsinkevich hits his victims the image is blurred and a cynical inscription reads "No to violence." But the audio track continues and their cries can be heard as he hits them with his fists or a rubber baton. He says, "I want to kill, but I'm not allowed."

Online Martsinkevich portrays himself as a pedophile hunter and asserts that the young men who make contact with his victims on dating websites are only 15 years old. Not only are Tesak's victims humiliated in front of their acquaintances and colleagues, they are also publicly pilloried as sex offenders.

But it's clear that the gang's activities are directed against gay men rather than pedophiles. If his victims are carrying ID, he shows it to the camera and scrawls the word "homo" on it. In the opening credits to his clips an eagle swoops on a pigeon with colorful feathers, a pun on a slang term for gay men.

"Pedik" is a common homophobic slur in Russia and is the short form of "pederast," and the equation of gay men with pedophiles is not limited to the extreme right in Russia. After decriminalizing homosexuality under President Boris Yeltsin, in 2012 Russian lawmakers forbade "propaganda of homosexuality among minors," adding further to the stigmatization of the country's LGBT community. A majority of Russians still considers homosexuality an illness and supports calls for government intervention to remedy the problem. But so far, the law has scarcely been applied and has not affected the lively gay scenes in Moscow and St. Petersburg.

But even REN-TV, a channel popular with Moscow opposition politicians and western observers as a bastion of free speech, has joined in Martsinkevich's witch hunt. A correspondent accompanied Tesak on one of his raids and continued filming even after he had started attacking his victim. Later the channel showed un-pixelated pictures of the alleged "pederast."

A History of Xenophobic Attacks

Neo-Nazi Tesak is well known to the authorities. In 2005, he headed up a neo-Nazi gang called Format 18, the number standing for AH, Hitler's initials. The gang beat up the homeless and immigrants from Central Asia and posted the videos online. On one occasion Format 18 posted images that seemed to show a Tajik man being hanged and his body being cut into pieces, though the execution clip turned out to be a fake. In 2007, Martsinkevich attacked an event organized by Alexei Navalny, now the informal leader of the Russian opposition, shouting that Russia needed to "kill all democrats."

Tesak's Format 18 was the model for director Pavel Bardin's documentary drama "Russia 88" on skinheads. Format 18 leader Martsinkevich received three years in prison for the attack on the Navalny event and for "incitement to hatred." He was released in late 2010, an unreformed character.

Martsinkevich actively encourages viewers to imitate his methods, advising against using knives "to avoid damaging the catch." His online fan base is growing daily, something he exploits financially by selling advertising for body building products on his website.

Russian authorities have long turned a blind eye to his activities. But early this month, members of an anti-extremism unit of the Russian police searched Martsinkevich's apartment. He wasn't there, having long since left the country. Apparently wholly unconcerned by the police investigation, he sent his 190,000 followers on VK.com a video message.