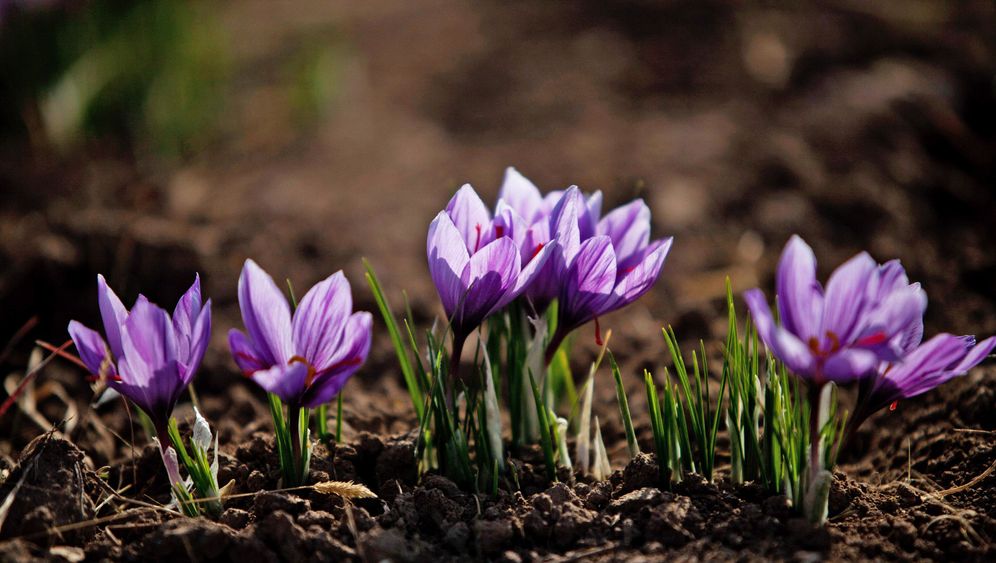 In these hard times, it's hard to find a place in Greece where people still look forward to the future, except perhaps in the country's far north, in Krokos on the Macedonian plain.

Nikolaos Patsiouras is one of the satisfied residents in the town of about 5,000 people, which is surrounded by rocky fields. "We have no debt, our exports are doing well and we are healthy," he says proudly. "We are pioneers for Europe."

They used to call him "little German boy" when he was a child, because of his blonde hair and blue eyes. His hair is now silver-gray, and the 57-year-old is the president of the local cooperative of about 1,000 saffron producers, the only one of its kind in the country. The area around Krokos is world-famous for its red saffron, known as "red gold," the rarest and most precious spice on earth.

Krokos produces 1.5 to 2 tons of saffron a year, which sells for up to €2,000 ($2,600) a kilo. The farmers export the highly delicate stigmas of the saffron crocus to the United States, France, Germany, Canada and Australia. With world production at about 200 tons, Greece's share is relatively small. But about 90 percent of total production comes from Iran, which is having export difficulties because of its nuclear policy and Western sanctions.

Besides, the red saffron from Krokos is prized among top chefs. "We are the best," says Patsiouras, a stout, amiable man with rimless glasses. Medals from international awards are stacked on the cabinet behind him, and certificates hang on the walls. "Why else does our saffron fetch up to €500 more per kilo than saffron from Iran?" he asks.

Patsiouras' job is an unpaid position. He has no privileges and plays no special role. The cooperative pays 90 percent of its proceeds directly to the farmers. This is rare in a country where nepotism and corruption plunged an entire nation into crisis.

To become president of the cooperative, one must be a saffron producer. Patsiouras grows crocus sativus, a crocus plant with bluish purple flowers in the iris family, on about a hectare (2.47 acres) of land.

He used to be one of 2,500 spice farmers in the region, but many young people moved to the city over the years. There was a huge exodus around the 2004 Summer Olympics, when the entire country was experiencing an economic boom. Three years ago, there were only 580 saffron producers left in Krokos.

Part of the reason is that it's very hard work. To produce one kilogram of saffron, about 150,000 crocus flowers have to be picked by hand and the precious stigmas carefully plucked from the flowers. The harvest is concentrated in a two-week period in late October and early November. "Each time you ask yourself: Why am I doing this?" says the cooperative's president.

But he also delights in the harvest every year. "There is something magical about saffron," he says. His family has been growing crocuses for at least four generations. The plant was considered extinct in Greece until a few bulbs were brought to the area from Vienna about 300 years ago. There has been documented cultivation on the Macedonian plain since then.

Farmers Return to amid Crisis

Why the precious flower with expensive stigmas does so well in the region is a mystery. Is it the climate, with the Vourinos Mountains providing protection from the wind, the persistent fog and the unique, sandy soil? "To this day, we still don't know what is so special about our location," says Patsiouras.

Now that the debt crisis and austerity measures have forced the entire country to its knees, young people and former farmers are returning to Krokos. There are now as many saffron farmers as there were 10 years ago, when the Krokos region produced six tons a year, making it the world's second-largest producer. The farmers hope to regain that position in the next two years by doubling the amount of land devoted to the crocuses and tripling production.

In Germany, red saffron from northern Greece sells for up to €13 per gram. Chefs are scrambling to get it, especially now that British food inspectors concluded that saffron from Spain was of lesser quality, in terms of color, aroma and taste. It was also the British media that exposed Spanish exporters who had been repackaging and relabeling cheaper Iranian saffron.

Europe still works in Krokos, and Patsiouras believes in a common future. With bulbs from Austria, praise from London and the usual agricultural subsidies from Brussels, he says, "we are a European project; we are nothing without Europe."