The political instinct of self-preservation was certainly helpful. But it was a court order demanding the immediate reopening of the Greek state broadcaster ERT that gave the country's coalition government a new lease on life late on Monday. It also saved the nation from the nightmare of political instability amidst the crucial summer tourism season.

The abrupt shutdown of ERT and the subsequent dismissal of its 2,700 staff members -- a heavy-handed move made a week ago under intense pressure from the country's creditors to dismiss 4,000 public servants by the end of the year -- had brought the coalition to the brink of collapse.

Prime Minister Antonis Samaras, leader of the conservative New Democracy party, has made the closure of ERT into a symbol of his reform drive, promising to create a new, slimmer and more efficient and transparent broadcaster by the end of summer. But his left-wing coalition partners insisted that ERT reopen immediately. They accused Samaras of behaving unilaterally and of having no respect for his coalition partners.

Indeed, the situation became so grave that coalition leaders gathered in Athens on Monday night for emergency talks in a last-ditch effort to avoid a governmental collapse and snap elections. For once, fortune was on their side. Even as the trio of leaders was meeting, Greece's top administrative court ruled that the government must reopen ERT immediately and keep it on the air until the new broadcaster is ready to replace it -- just as Samaras' junior coalition partners had been demanding.

Yet the court did not rule against the closure as such, meaning that New Democracy too was able to claim a partial victory. "The court order gave the three leaders a way-out, without any one of them losing much face," a government minister and senior adviser to Samaras told SPIEGEL ONLINE on Monday evening.

ERT workers initially celebrated the court decision, but skepticism has since set in. They doubt the court order is enough to save their jobs. "The court vindicated our position that ERT must be open and running. But the ruling did not touch on our status," said an ERT3 reporter who was following the developments with many of his colleagues at ERT's studios in Thessaloniki. "For all we know, we are still the fired workers of an abolished broadcaster."

The emergency Monday evening talks had become necessary after Samaras abruptly announced the closure of ERT last week, resulting in the sudden disappearance of the public broadcaster from the airwaves. Samaras said that the move was necessary as part of his effort to transform Greece from "a real Jurassic Park" into a modern economy, but it triggered a massive nationwide strike last Thursday as the country's journalists walked off the job.

The political crisis that resulted was the deepest since Samaras' current three-party coalition came into power a year ago. The meeting on Monday lasted over three and a half hours and, according to sources within the coalition, was often loud. Samaras was forced to make additional concessions to his coalition partners, including a cabinet reshuffle as early as July, so as to ward off the specter of new elections that nobody really wants. According to a government source, Samaras told his coalition partners that they must avoid an election at all costs to prevent "surrendering the country to the tides of populism."

It remains to be seen how long Monday's deal will hold, particularly given that there are plenty more difficult decisions facing Samaras' government. But pressure from Greece's troika of creditors -- made up of the European Commission, the European Central Bank and the International Monetary Fund -- has made it clear that snap elections would be disastrous. "The last thing Greece needs is a new crisis," said European Economic and Monetary Affairs Commissioner Olli Rehn on Monday in a speech to European Parliament.

Yet pressure from within is equally strong. All three of the parties in the Samaras-led coalition -- the Socialist party PASOK and the Democratic Left party are the others -- are polling lower than their electoral showing in June 2012. Polls suggest that an election would result in a hung parliament, with New Democracy -- should it manage to win -- being forced to form a weaker coalition government with the same partners. The only ones who stand to gain from a new election would be the left-wing group Syriza and extreme right-wing Golden Dawn party.

Furthermore, Greeks themselves are fed up with being asked to vote, with polls showing that 60 percent don't want new elections. Widespread disillusionment is certainly one reason. But elections in Greece tend to be messy affairs, with the state bureaucracy grinding to a halt as public servants and managers await the appointment of their new political bosses. That would mean that, once again, Greece's reform efforts would slow down.

To what degree such factors served as motivation for coalition leaders on Monday evening is difficult to know. But the Samaras government has very clearly pinned its economic hopes on the summer tourism season this year and has already shown a desire to avoid doing anything to hurt it. Indeed, earlier this month, Samaras asked the troika for permission to slow the pace of public sector layoffs so as to avoid potential unrest that might unsettle the record 17 million tourists expected this year. The country is now in its sixth straight year of recession and unemployment is at 28 percent -- Athens is eager to do anything necessary to breathe a bit of life into the economy.

For Samaras, of course, there was one additional motivator on Monday evening. He has managed to build a strong working relationship with German Chancellor Angela Merkel, to the point that she even called him on Sunday in a show of support. He is hoping that the close personal ties might ultimately help in his bid for a new debt haircut for his country.

Such a bid, of course, can only take place after German general elections this fall. And Samaras knows that a political crisis in Greece is the last thing that Merkel needs as she campaigns for re-election. 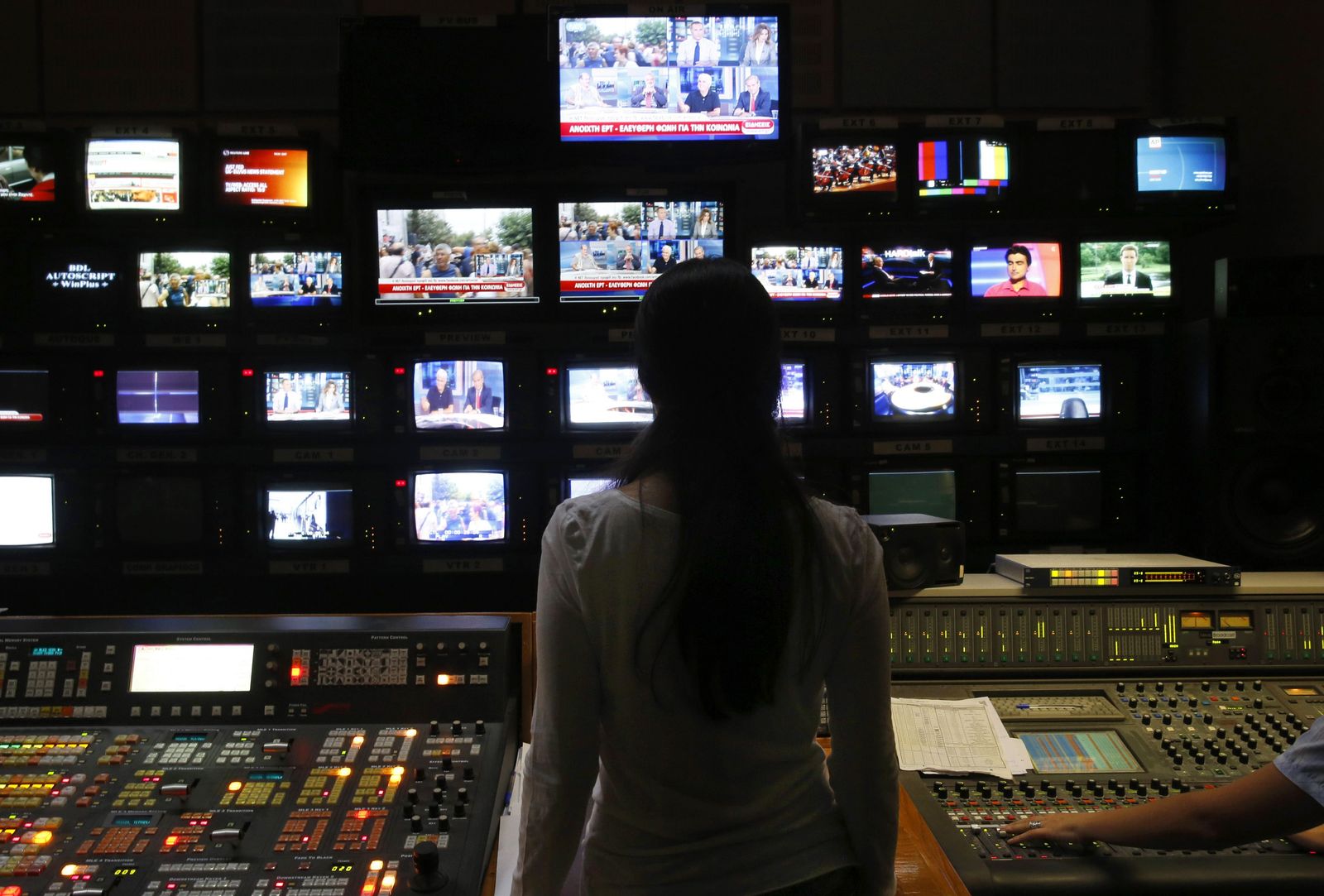 An employee of state broadcaster ERT in the station's control room in Athens.