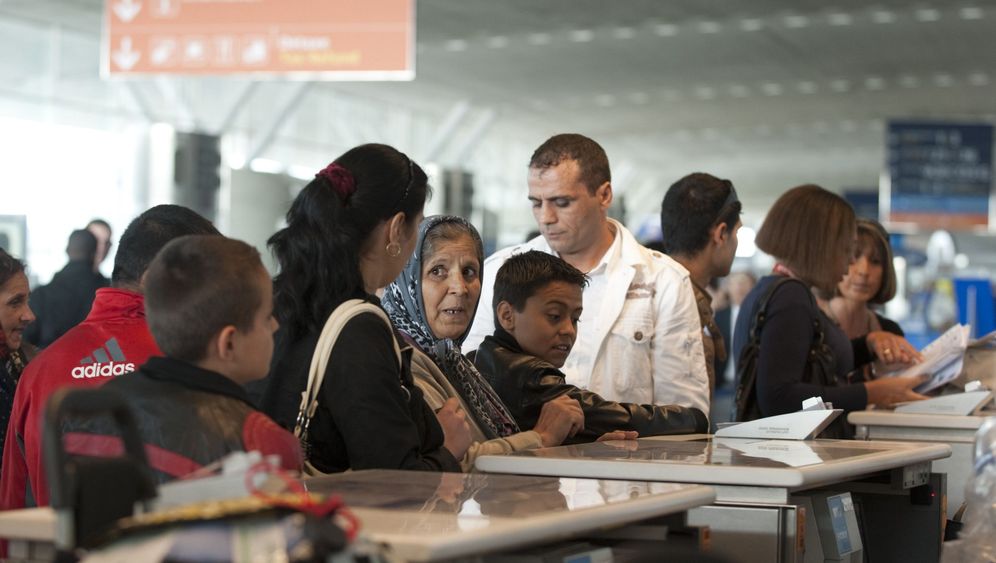 A raid in Harmes, 200 kilometers north of Paris: the police clear out a Roma camp in the small village located in the departement Pas-de-Calais. Sixteen people are taken into custody to inspect their legal status. At the same time, 84 Roma in Tremblay-en-France, just northeast of the French capital, are forced to leave public land belonging to the city. In Bordeaux, dozens of mobile homes and caravans belonging to Roma and traveler minorities block a road in protest after having been expelled from an illegal campground.

On Thursday, France took the next step and began to expel the recently evicted Roma. A charter flight carrying 93 Roma took off for Bucharest on Thursday -- the beginning of a government plan to expel hundreds by the end of the month. Most of them are from Romania and Bulgaria; both the countries are members of the European Union, but their citizens still need work permits and residency permits for longer stays in other member states.

Still, the French offensive against Roma is not free of political calculation. Many suspect that President Nicolas Sarkozy has found new scapegoat in his fight against crime.

Interior Minister Brice Hortefeux, one of the champions of the expulsions, recently trumpeted: "We have closed down 40 illegal camps in the last two weeks." He said that 700 people were affected and they would be sent back to their "countries of origin" in the coming weeks. For Hortefeux, such numbers speak of a resounding success. The government wants to display stubborn resolve in its Roma policies.

Hortefeux is not alone. Fellow cabinet member Christian Estrosi, Sarkozy's minister of industry as well as being the mayor of Nice, has likewise struck a stern tone. "Cities that don't fulfil security regulations should be forced to pay stiff monetary penalties," he proposed. In other words, those municipalities that show sympathy with the Roma will be sanctioned. Earlier this week, he was even more precise. He said he is particularly concerned that cities controlled by Socialist Party (PS) mayors "are not completely fulfilling their duties when it comes to crime prevention."

France's policy of repatriating Roma isn't new. Last year, the country sent some 10,000 Roma back to Romania and Bulgaria, with some 70 percent going willingly after being offered aid by the French government to resettle.

But this year, Paris has seemed intent on using the expulsions as a political tool. Comments of the kind made by Hortefeux and Estrosi are useful for producing headlines. The two have kept themselves in the news throughout the summer vacation season in France, with Hortefeux, a personal friend of Sarkozy's since early in their political careers, repeatedly demanding stricter laws.

It is a strategy which reminds observers of political strategies once pursued by Sarkozy himself. Demands for toughness, Sarkozy learned during the violent protests in the suburbs which rocked France in 2005, generate media attention. Hortefeux appears to have been taking notes.

Estrosi, for his part, looks to be content in his role as sidekick. His cabinet career has so far been less than impressive and his administration in Nice has shown a predilection for installing surveillance cameras around the city. Still, Estrosi does not shy away from directness. Headlines are the main thing -- and they please Sarkozy, who has recently spoken kindly of his industry minister.

The president's allies have been successful in keeping the issue of domestic security high on the political agenda. And they are using well-known tactics to do so: a mixture of fear mongering and xenophobia. It has proven a perfect antidote to abysmal approval ratings for Sarkozy's government and it is also useful for putting the president's political opponents on the defensive. The Socialist opposition had been planning on presenting their domestic security proposals only at the beginning of next year.

The trigger for this summer's debate about domestic security was a mid-July incident which saw a young Roma killed by a French policeman in the town of Saint-Aignan in central France. Exactly what led to the killing remains unclear, but shortly afterwards, 50 people armed with clubs and iron bars stormed the local police station. Several cars were burned and a community hall in a neighboring town was burned to the ground.

It was an ugly episode, and one which caught the attention of Sarkozy's government in Paris. In the last cabinet meeting prior to the summer recess, the government agreed on tough measures against Roma living in France illegally. Furthermore, they resolved to close down "illegal camps" and to repatriate foreigners not in possession of the necessary residency papers. "Traveler minorities are not above the law," thundered Hortefeux at the time.

A second mid-July incident, which saw extensive rioting in Grenoble following the death of a suspected armed robber during a police chase, led Sarkozy to call for a "war" against crime and violence. It was the starting signal for a summer campaign which could ultimately become a political boomerang. The tough campaign against Roma in France has not, after all, been uncontroversial.

'Risk of a Populist Backlash'

France's opposition, as expected, is up in arms. But the European Union has likewise voiced concern. A spokesman for the European Commissioner for Justice said that the office would be following developments in France closely. Furthermore, Romanian Foreign Minister Teodor Baconschi told French radio that "I express my concern about the risk of a populist backlash and generating xenophobic reactions against the backdrop of the economic crisis."

But there are also critics within Sarkozy's own political camp. "It is a shocking policy," says Francois Goulard, a member of parliament from Sarkozy's Union for a Popular Movement. His colleague Jean-Pierre Grand even said the arrests recall the mass incarcerations of Gypsies in occupied France during World War II. They weren't released from the internment camps until 1946, two years after France's liberation from the Nazis. Grand is upset "that families have been split up by security personnel -- on one side the men, on the other the women, and they are threatened with being split up from their children."

It is a debate which also shows how little success Sarkozy's government has found in the fight against organized gangs and ordinary crime. On the whole, crime is down, particularly when it comes to break-ins and white-collar crime. But assaults are being committed more often than at any time since 1996, according to the National Criminal Record Office in Paris.

'Neither Realistic Nor Practicable'

Police representatives have said that Sarkozy is primarily to blame. As Interior Minister, Sarkozy was popular among police for having given them raises and provided them with new equipment. But as president, he has slashed the police budget. Some 9,120 police jobs have been cut in the last three years with 3,500 more to be eliminated by 2012.

Given such statistics, the Socialist mayors who were accused by Industry Minister Estrosi of not doing enough to combat crime are furious. Even Jacques Pélissard, the head of the Association of French Mayors and a member of Sarkozy's UMP, has charged Estrosi with having gone too far. The sanctions Estrosi spoke of are, Pélissard said, "neither realistic nor practicable." Hortefeux, for his part, has since backed down. During a Tuesday visit to Toulon, he said "the mayors are the state's natural partners and we want to treat them with respect."

Still, the government is eager to use the clearing of the Roma camps to make a point. More flights carrying Roma back to southeastern Europe are expected in the coming days and weeks.