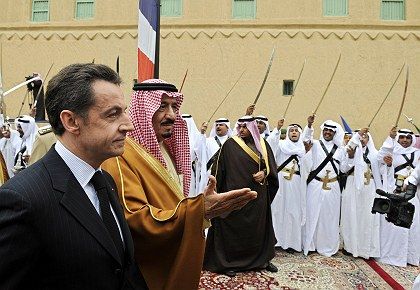 French President Nicolas Sarkozy may have been distracted by his budding romance with Carla Bruni for the past few weeks, but finally he is back in the headlines for something other than his love life. On Sunday the ever energetic French president kicked off a three-day tour of the Gulf with a visit to Saudi Arabia where he was hoping to increase France's share of the cake when it comes to trade with the oil-rich state.

Arriving on Sunday evening with an impressive entourage of six ministers and 20 business leaders, the president was intent on increasing French business in Saudi Arabia and paving the way for possible future cooperation on civilian nuclear energy. His next stops are Qatar and the United Arab Emirates.

On Monday the French president addressed the country's Consultative Council where he emphasized that France wanted to be friends with both Saudi Arabia and the Arab world. And he told the all-male group that proposes laws in the kingdom and follows a fundamentalist interpretation of Islam that it had made progress on the issues of women's rights and freedom of speech.

Planned Nuclear Projects in the Arab World and Iran.

On Sunday Sarkozy's delegation negotiated a series of cooperation agreements and outlined infrastructure and military contracts, worth some €40 billion ($59 billion) according to French officials, though none of the contracts have been finalized yet. "We can do better," the president said after the meeting, "we have to." Sarkozy is looking to increase France's share of trade with the kingdom, which is currently only 3.9 percent, lagging far behind the United States and the United Kingdom.

Sarkozy said Sunday that the purpose of the trip was "political, economic, cultural and military," and that Saudi Arabia's role was "essential" for peace in the region.

The Saudi Arab News wrote on Sunday that cooperation between the two countries was "particularly important at a time when the Middle East is experiencing dangerous crises which risk setting the entire region alight."

In an interview with the pan-Arab Al-Hayat daily published on Sunday, Sarkozy said his visit was aimed at giving "a new dimension to our strategic partnership with Saudi Arabia," adding that French firms "can meet the aspirations of Saudi Arabia in all sectors, namely energy, transport  or water distribution."

Saudi Arabia, with a population of 25 million, 60 percent of whom are under 25, is looking to invest in crucial areas of infrastructure and education. France sees itself as uniquely placed to help, particularly in the area of railway construction. The country wants to build a TGV fast train link between the holy cities of Mecca and Medina, as well as a subway system in the capital Riyadh.

France is also hoping to secure lucrative nuclear energy contracts in the kingdom. On Sunday evening Sarkozy offered King Abdullah the services of the French Atomic Energy Commission to look into building a civilian nuclear energy program there. France supplies most of its own electricity from nuclear power and is now trying to take advantage of the fact that many countries in the Arab world are now looking into this energy source. For example, last November Egyptian President Hosni Mubarak announced that his country would build four nuclear reactors by 2020.

In his interview with Al-Hayat Sarkozy said "I have often said that the Muslim world is no less reasonable than the rest of the world in seeking civilian nuclear (power) for its energy needs in full conformity with international security obligations."

The president leaves for Qatar on Monday and then travels to the United Arab Emirates on Tuesday where he is expected to sign a nuclear cooperation deal. This would be the third deal France has struck with an Arab country on providing nuclear technology since Sarkozy took office. He has previously signed deals with Algeria and Libya.

The Sarkozy trip is shadowing that of US President George W. Bush, who is on an eight-day trip in the region. Bush is hoping to gain Arab support for his tough line on Iran, which he called "the world's leading state sponsor of terror," during his visit to the UAE on Sunday.