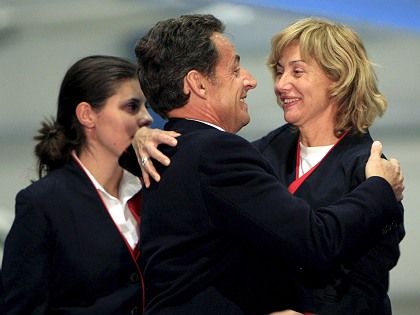 French President Nicolas Sarkozy embraces one of the freed Spanish flight attendants as she disembarks in Madrid.

Whenever Europeans are in peril in Africa, it seems that Nicolas Sarkozy is never far away. Back in July, the French president and his then-wife Cecilia intervened to secure the release of five Bulgarian nurses and a Palestinian doctor who were being held in Libya. Now Sarkozy has carried out another whistle-stop mercy mission on behalf of Europeans being held in Chad over kidnapping allegations.

The French president flew four Spanish flight attendants and three French journalists back from Chad on Sunday in his official jet. The plane made a stopover in Madrid to let off the flight attendants -- who were personally greeted by Prime Minister Jose Luis Rodriguez Zapatero -- before flying on to Paris.

The seven had been held in Chad in connection with allegations that French charity Zoe's Ark had tried to kidnap around 100 African children and take them from the country. Ten people -- six Zoe's Ark employees, three Spanish air crew and a Belgian pilot -- are still being held in Chad over the abduction allegations.

The group was arrested on Oct. 25 as they tried to fly 103 children out of the country. Zoe's Ark claims the children are orphans from the war-torn Sudanese region of Darfur. However the United Nations aid agency UNICEF and Chadian officials say that most of the children come from the violent Chad-Sudan border and have at least one living parent. And Chadian authorities allege the action was a scam and that the organization wanted to put the children up for illegal adoptions. President Idriss Deby also initially raised the specter of pedophile networks and trade in organs in order to win public backing against Zoe's Ark operatives.

Sunday's release came after the head of Zoe's Ark, Eric Breteau, told officials in Chad Saturday that the journalists and flight crew had nothing to do with the group's activities.

Earlier on Sunday, Sarkozy had met with Chad leader Deby in the capital city N'Djamena. At a joint news conference, Sarkozy said he would prefer to see French citizens tried in French courts and said there would be discussions between the two countries' judiciaries to find an acceptable solution to the dispute. Last week, Sarkozy criticized Zoe's Ark, saying its workers were "wrong to do what they did."

If convicted in Chad, the suspects could face sentences of up to 20 years of forced labor.

Zoe's Ark is a highly controversial charity. Just one week ago, French television showed a documentary which raised suspicions about the group. Footage showed one charity worker admitting she could not be sure of the children's nationality or if they were orphans. In another scene, charity workers are seen putting bandages on the children to make them look like war victims.

Despite the allegations, hundreds of people marched in Paris on Sunday in support of Zoe's Ark's members. Still, some of the estimated 250 French families, who had paid as much as €6,000 to the organization in expectation of fostering African children, are preparing to file fraud charges against the charity.

The dispute comes at a sensitive time for relations between France and Chad. The European Union is planning to deploy a peacekeeping force in Chad and Central African Republic in a bid to protect Sudanese and Chadian refugees. France, the former colonial power, will provide about half of the soldiers for the 3,000-strong force.