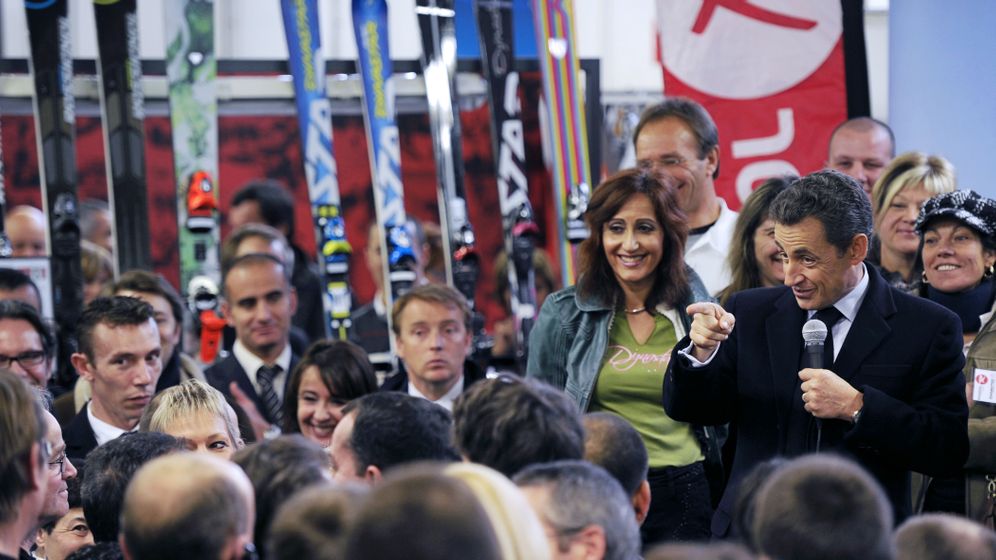 He's not allowed to go skiing -- that would be too dangerous for a president -- and yet there could have been no better present for Nicolas Sarkozy than the small pair of skis that he received from the workers at the Rossignol plant last Tuesday.

The skis were signed by French slalom specialist Jean-Baptiste Grange. Sarkozy loves athletes, especially winners, but there was something special to note about Grange: "Jean-Baptiste Grange is a real champion," said the president.

He was standing in Rossignol's production halls in Sallanches, near Mont Blanc, in front of some 200 workers.

"Grange was injured, but now he's made a comeback. This shows us that anyone who is down can get back up again." Sarkozy made a brief pause before adding: "I'm talking of course about Jean-Baptiste Grange."

The workers laughed. Of course Sarkozy was talking about himself.

Something has changed over the past few weeks in the French presidential election campaign. The incumbent is still not the favorite, but suddenly what everyone ruled out months ago no longer seems unthinkable. In other words, he could get reelected.

Sarkozy is the most unpopular president in the history of the Fifth Republic. His popularity ratings had plummeted to record lows in the wake of an endless series of scandals. In March of this year only 22 percent of the French indicated that they had "a good opinion" of him. He had even slipped to third place behind right-wing populist Marine Le Pen. Sarkozy seemed finished and the media had already written him off for the presidential election in April 2012.

In the eyes of many, he had desecrated the office of president. With his fidgety mannerisms, he was reminiscent of a comedian. Indeed, the newspapers dubbed him the hyper-president because he micromanaged everything -- and that wasn't intended as a compliment. Being the French president is about maintaining the airs of a dignified ersatz king. They all did it -- de Gaulle, Mitterrand, Chirac -- but Sarkozy appeared to have no interest in playing the role.

He readily rolled out his turbulent private life with an ex-model for the press and, like a parvenu, surrounded himself with rich friends. When a man once refused to shake his hand at a public appearance, he said: "Get lost, you jerk!" The French were offended by this. What's more, under his administration the country was plagued by what seems like a never-ending economic crisis.

Then came the sovereign debt crisis -- and Sarkozy was suddenly in the form of his life. He glued himself to German Chancellor Angela Merkel and appeared with her as Europe's leader. Week after week, he could be seen at her side, and they merged to become "Merkozy," this odd amalgamation, half man, half woman, half German, half French, which decides on the future of the European Union. He hoped to gain credibility from this liaison.

For more than a year he had tried to come across as a statesman, and no longer a caricature. He retreated from the media spotlight and allowed his prime minister, François Fillon, to step out of his shadow. He fathered a daughter and refrained from openly using her birth for PR purposes. On the few rare occasions when he directly addressed the French public, he spoke in solemn words about the crisis, seeming to indicate that he alone could lead them out of again.

But the turnaround came in the last few weeks with Sarkozy's self-assured appearances on the European stage and, ultimately, his close ties to Merkel, the icy German with her successful country. All this gave Sarkozy, the erstwhile playboy president, a renewed sense of gravity in the eyes of his fellow citizens.

He finally fit the image that the French have of a president. After last week's EU summit, the media celebrated him as the actual winner in Brussels -- although it was in fact Merkel who had dictated the conditions. Still, he managed to put British Prime Minister David Cameron in his place. Indeed, French papers summed up the situation as follows: Sarkozy had saved the euro zone and beaten the British. He was a hero.

Part of politics is the art of making yourself look good. Sarkozy is a master at this -- and he's at his best when he's standing with his back against the wall.

The man who also aspires to win the presidency could learn a thing or two from Sarkozy. Indeed, François Hollande, the Socialist candidate, has put in a poor performance since his nomination two months ago. He started with the largest lead that a challenger has ever had over an incumbent president. In an opinion poll conducted shortly after his nomination, Hollande would not only have beaten Sarkozy in the runoff election, he would have pulverized him, 62 to 38 percent. Since then, though, his lead has been crumbling. Hollande has presented himself as a candidate with no clear platform, chosen by a divided party at a time when the French left is mired in squabbling.

Worst of all, however, was that over the past few weeks, while Sarkozy was shuttling between Berlin, Cannes and Brussels as if he were the co-president of Europe, Hollande had little to say about the crisis, other than that he vaguely opposed everything that Merkel and Sarkozy had decided, without proposing a solution of his own.

After the agreement was reached in Brussels, Hollande said that as president he would "renegotiate" the deal. "I would put in everything that is missing," he said, "the intervention of the European Central Bank (ECB) and the euro bonds." These were precisely the two points that Sarkozy also wanted, but Merkel had turned down. His statement sounded a bit naïve. Then he noted that, in addition to austerity, "growth" was also needed. What exactly he meant by that remained unclear.

Hollande is your average Frenchman on the street. He's a short, amiable man who wears glasses, and the French like him precisely because he is so normal. He achieves popularity ratings of approximately 60 percent. That's his advantage -- and he's running against a president who is disliked by most people in the country. If Sarkozy manages to get reelected, then it won't be because he's popular, but rather because the French see him as a statesman who can lead them out of the crisis. Even his closest advisers openly admit that.

While the crisis has given Sarkozy renewed stature, it's had the opposite effect on Hollande -- it's made him look like a lightweight. Now, Hollande needs a message, but he doesn't seem to have one yet. Does he want to present himself as the better reformer? Or as the man who will protect the French from cost-cutting measures?

He plans to present his platform sometime in January, but he's already traveling through the country, touring factories wearing safety glasses, placing his Plexiglas lectern in front of soldiers' graves, all the while looking a bit awkward.

Hollande wants to show that he's in the running, without exactly knowing what issues he wants to run on. He wants to cut costs, too, but differently than Sarkozy. He wants to create 60,000 new teaching positions, even though he can't explain convincingly how he intends to pay for them. And he's also called on companies to manufacture in France -- just like the president.

Last week he spoke about the retirement age, which Sarkozy has increased by two years to 62. The Socialists actually want to reverse that decision, but the state can't afford it, and Hollande knows it. He says that he favors reducing the retirement age to 60 -- but only for those who have been working since they were 18. Yet even that compromise instantly incited furious objections among the ranks of his own party.

France's Socialists are divided into pragmatists and fundamentalists, and they are also divided into Hollande's supporters and those who side with party leader Martine Aubry. Ever since Hollande's victory in the primary, he has sought to bring together all sides -- a nearly impossible mission. As if that weren't enough, Dominique Strauss-Kahn, meant to be the Socialists' candidate before getting caught up in the sex scandal in New York, keeps making the news. Meanwhile the party has been tainted by two financial affairs, one in northern France and one in Marseille. Furthermore, since Hollande's nomination they have been constantly wrangling with their traditional ally, the Green Party.

While Hollande has been busy with his own party and launching his campaign, Sarkozy has occupied the entire political stage. He is billing himself as a man of great reforms, although he has had four years to launch them and the results are rather modest. In addition to pension reform, he has undermined the power of France's trade unions, and in the initial years of his presidency he actually increased the budget deficit by making tax concessions.

He could be attacked on many fronts, but the Europeanization of his presidency has put a buffer between him and his opponents, at least for the time being. He has stylized himself as the advocate of the "German model," which he intends to follow to save France. He set the tone for this in a major speech that he gave two weeks ago in Toulon. It was a bold message because he combined nationalistic fervor and solidarity with Germany, while still preparing the people for severe cutbacks.

This is also the tone that he adopted with the workers at Rossignol. "I've asked you to work two years longer," he said, modulating his voice to make it almost soft. "I know that you're not happy about this," he continued. "But if you act too late, it will be harder and it will cost more. Look at the countries around us: Italy, Greece and Spain. I had to do it."

The role model that Sarkozy's advisers point to is a German Social Democrat: Gerhard Schröder. When Hollande spoke before the Social Democrats (SPD) in Berlin on Dec. 5, though, he didn't mention Schröder once. Meanwhile, a number of his fellow Socialists back in France had just compared Merkel to Bismarck and, indirectly, to Hitler. SPD leader Sigmar Gabriel said that he was looking forward to seeing Hollande as president next year.

Despite Sarkozy's improved standing, that's not an unrealistic dream. Hollande remains the favorite. In a recent opinion poll he led 57 to 43 percent in the obligatory second round of voting, the runoff election. To lose such a comfortable lead, he'd have to make a lot of mistakes. 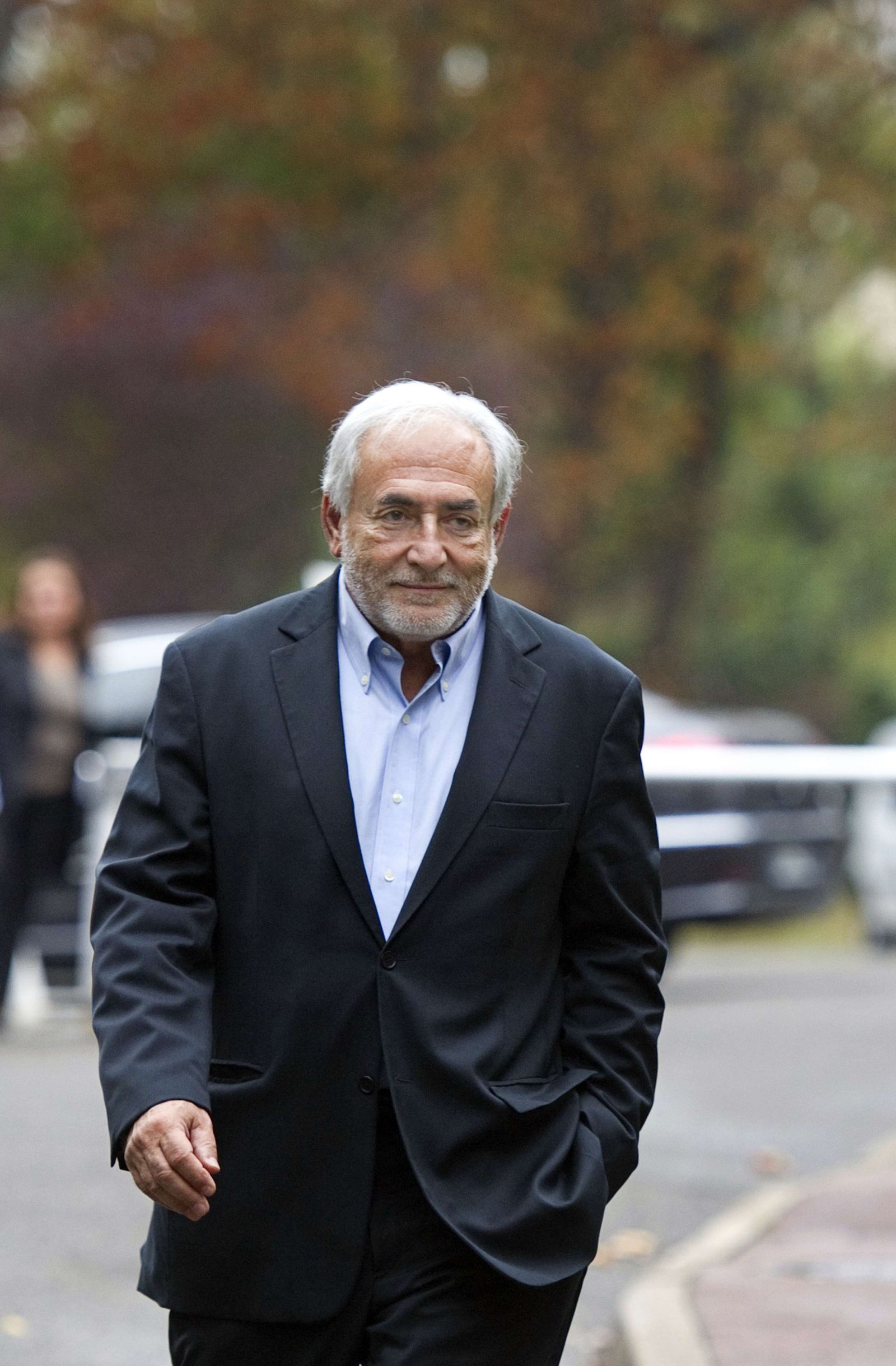 He hasn't been helped by the fact that Dominique Strauss-Kahn, who was meant to be the Socialist candidate before he got caught in a scandal in New York, keeps popping up in the news. And the party is tainted by two financial affairs -- one in northern France and one in Marseille. Since Hollande's nomination, the Socialists have also been constantly wrangling with their traditional ally, the Green Party.