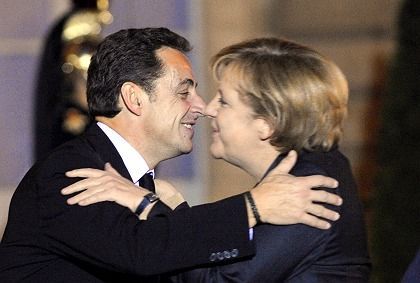 Government officials in Berlin and Paris announced last week that a meeting between heads of state from France and Germany had been postponed until June, prompting speculation that French President Nicolas Sarkozy's proposed Mediterranean Union had caused a rift with German Chancellor Angela Merkel.

Both German and French officials have denied that a mini-summit scheduled to take place March 3 in Blaesheim, France was cancelled because of a policy dispute.

A government spokesperson in Berlin cited a scheduling conflict for the French president. That explanation was corroborated by the Elysee Palace, where a press officer told the AFP news agency: "This meeting has been postponed due to the busy agenda of the head of the French state." The meeting has been rescheduled for June 9, shortly before France assumes the rotating EU presidency in July.

The German media, however, was quick to suggest that Merkel may be making a statement in protest over Sarkozy's planned Mediterranean Union.

"The real reason (for the cancellation) is the pronounced differences between the two politicians' positions regarding the Mediterranean Union," wrote the daily Die Welt on Friday.

Merkel has consistently criticized Sarkozy's plan for a new diplomatic bloc that would unite states from southern Europe, North Africa and the Middle East. She has accused Sarkozy of seeking to side-step existing EU policies in an effort to increase France's diplomatic clout and of proposing to spend funds from the 27-nation bloc to help establish his new union.

After a meeting with Sarkozy in Paris on January 30, Merkel told reporters that all EU states should be involved in efforts to improve relations with the non-member nations that border the Mediterranean Sea.

"Germany wants to assume its responsibilities in the Mediterranean and we want to offer to all member countries the possibility to participate," she said. "We should have a reinforced co-operation. I am convinced that all European countries are interested in this."

A report by the Brussels-based independent think tank the European Policy Centre suggests that Sarkozy's vision for a Mediterranean Union -- which he has championed since his election campaign -- is motivated by a desire to reassert French influence in the EU, gain traction in North Africa and the Middle East, and to move Turkey from EU candidacy to membership of a more relaxed regional alliance.

The report, published this month, characterizes the union as an attempt to "re-brand France's traditional politique arabe and to shake up the enlarged EU by giving new impetus to Paris' traditional role in the European integration process."

Sarkozy plans to launch the union at a summit that he will host on July 13 under the auspices of France's EU presidency. Seven EU member nations with Mediterranean coastlines will be invited (Slovenia is not participating), as well as five North African states, Syria, Lebanon, Israel and Turkey. If an accord is reached among the Mediterranean nations, Sarkozy hopes to invite the remaining EU member states to approve the new union the following day.

But resistance from some EU members -- led by Merkel and amplified by the cancellation of the Blaesheim summit -- may oblige Sarkozy to settle for a weaker union in which all EU nations could participate.

"The key question is whether  if redirected properly and with a more cooperative logic and inclusive style  (the union) will help strengthen Europe's presence, influence and visibility in the Mediterranean," suggests the EPC study.

The specter of a Mediterranean Union is just one of several policy disputes currently straining relations between Berlin and Paris.

A meeting between German Finance Minister Peer Steinbrück and his French counterpart, Christine Lagarde, was also cancelled this week. When announcing the cancellation on Monday, a German government spokesman again cited a scheduling conflict for the French, but media reports noted recent tensions between Berlin and Paris over criticism of the president of the European Central Bank and the ongoing tax-evasion scandal in Liechtenstein.

The two nations also diverged recently in their support of the EU mission to Chad -- France contributed 2,100 of the 3,700 EU peacekeeping troops deployed last month to the chaotic central African nation, while Germany refused to send any soldiers. German commentators suggested that the EU mission to Chad pandered to France's desire to protect Chad's dictator, Idriss Deby.

The Franco-German mini-summits in Blaesheim date back to a 2001 meeting between then-French President Jacques Chirac and former German Chancellor Gerhard Schröder, where the pair agreed that their governments should meet regularly to discuss shared policy concerns.

At a Blaesheim summit in 2002, Chirac said that the power of a consensus between France and Germany could not be ignored: "When we are in agreement, Europe works. When we can not reach an agreement, Europe comes to a standstill," he said.