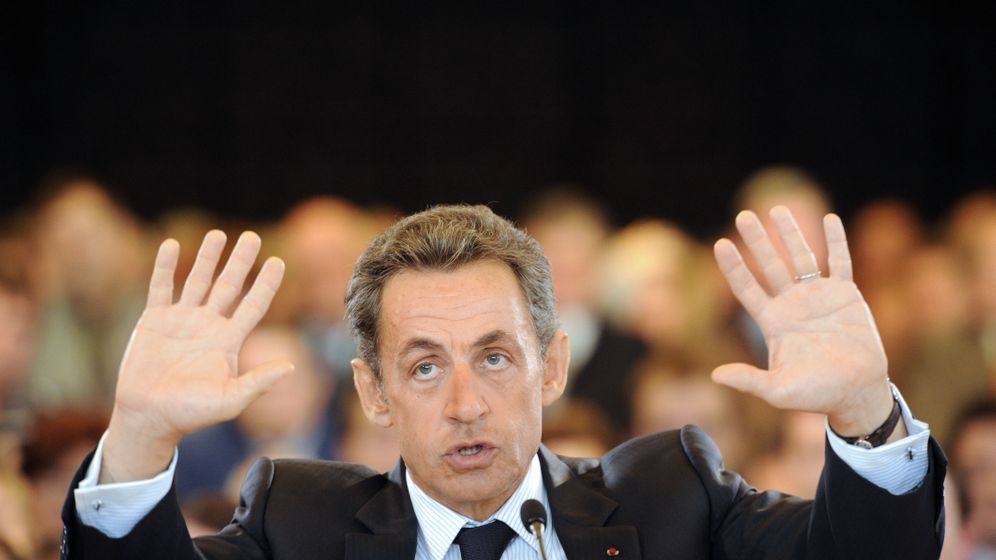 During his adventurous journeys across oceans and through faraway lands, Obelix, the loyal friend of Asterix in the famous French comic book series of that name, is often surprised by local customs and traditions. Whenever he encounters something unfamiliar, the fat Gaul in the blue-and-white striped pants taps his red hair and mumbles: "These Romans are crazy," or makes similar remarks about whichever nationality he happens to have encountered.

These days, as the French take to the barricades once again to protest a pension reform that appears to be necessary, one might be tempted to turn Obelix's remarks around, and ask: Are these Gauls crazy? Have the French lost their minds?

Last week, garbage collectors went on strike in Marseille, while shouting high-school students marched through the streets of Nanterre. Buses and trains remained idle in Calais, Dijon, Toulouse and Nice, where public transportation was almost shut down for entire days at a time. In 24 university cities, including Rennes, Caen, Montpellier and Grenoble, students marched out of lecture halls and became a jubilant threat to public safety on downtown streets. There was no mail delivery in Poitiers and there were no newspapers in Paris.

Because protesters had blocked access to refineries and fuel depots, more than 3,000 filling stations around the country ran out of gas. Traffic at the airports in Paris and other cities was seriously disrupted, many long-distance trains were cancelled throughout the country and truck drivers provoked traffic jams on major highways. The corresponding images, including those of small fires set by rioters, quickly circled the globe.

Those who have paid only fleeting attention to the events in France and have relied on little more than brief, hectic news reports must conclude that the French, in defiance of all reason, are fighting ferociously to keep their retirement age at 60, and not change it to 62, as the government wants to do. If this were true, one would indeed be forced to conclude that the French are mad, and France itself would have to be written off as a serious partner in Europe until further notice. But fortunately the truth looks a little different.

Yes, the French are protesting against a flawed, unfair and poorly executed pension reform, and they are angry about more than what is being touted as a number of ridiculously minor changes. At the same time, however, the resistance against this concrete reform project by a very broad, only loosely cohesive protest movement offers a welcome excuse for the French to finally vent their long-simmering frustrations with their general situation. In fact, France is currently witnessing a veritable popular uprising against a government which has been shaken by scandals and which is already over the hill after only half of its term in office. The real target of the protesters' anger is Nicolas Sarkozy, the most unpopular French president of the last 30 years.

The Widespread Deterioration of a Once-Proud Republic

The parade of minor and major mistakes and scandals of the past summer provides an indication of where all this anger in the country is coming from, and of the extent of French citizens' disenchantment with their politicians today. During the football World Cup in South Africa, the outspoken secretary of state for sports, Rama Yade, criticized the French Football Federation for choosing an excessively luxurious hotel for its national team, before it was revealed that Yade herself would be staying at one of the most expensive luxury hotels in South Africa during her visit.

Soon afterwards, it became known that Christian Blanc, secretary of state for the Greater Paris region, had spent €12,000 of his budget on Cuban cigars within 10 months -- and Blanc didn't even understand what all the fuss was about. Other administration officials, including Industry Minister Christian Estrosi, allowed family members to use their official residences, paid for with taxpayer money, for private purposes. Did they feel guilty? Not at all. Did anyone apologize? What on earth for?

It's little short of a miracle that Labor Minister Eric Woerth, the man behind the highly controversial pension reform, still has his job and isn't in prison awaiting trial instead. In his previous job as budget minister, Woerth saw no conflict of interest in the fact that his wife worked for the holding company that managed the fortune of the wealthy L'Oréal heiress Liliane Bettencourt, and to this day Woerth still hasn't been able to rebut the accusation that he deliberately steered his wife into the job. Woerth, in his capacity as treasurer of the ruling party, the Union for a Popular Movement (UMP), is also accused of having accepted illegal political contributions, in the form of cash-filled envelopes, from the very same Madame Bettencourt. Woerth denies everything.

The worst of it is that in France today, it is unlikely that such offenses will be investigated or that the alleged culprits will face punishment. In the Sarkozy era, judges and prosecutors are carefully weighing which cases they are willing to take on, and the parliament has also become a blunt weapon. Under Sarkozy, the French have witnessed the widespread deterioration of a once-proud republic and its values. In the years before the "omni-president," it would have been unthinkable for a French leader to give an inflammatory speech on national "insecurity," as Sarkozy did this summer. It would also have been inconceivable for an earlier administration to pursue a policy of expulsion like Sarkozy's treatment of the Roma.

The list of failings of the Sarkozy government is long, and their political consequences become more palpable with each new opinion poll. In a reliable new poll conducted last week, only 6 percent of respondents said that Sarkozy was doing a "very good" job, while 69 percent said that they considered Sarkozy to be a "bad" or "very bad" president. In other polls, some two-thirds of respondents have said that they approve of the strikes and protests against the pension reform. But in the end Sarkozy is even to blame for that.

A Declaration of War against the Unions

The word has spread in France that the contributory pension system can only remain viable if it is modified to conform to demographic and financial necessities. The current situation is, roughly speaking, comparable to the situation in Germany before the changes of recent years. The legal retirement age is 65 (and is expected to increase to 67), and the contribution period is 40.5 years (and is expected to increase to 41.5 years). The fact that the numbers 60 and 62 are constantly appearing in news reports is the result of confusing terminology, cultural differences and an attempt to stultify the positions of the unions and the Socialists.

In fact, 60 is merely the earliest possible retirement age for workers who have been paying into the system for at least 40 years. Anyone who retires at 60 in France without having completed the full contribution period must accept substantial reductions in benefits. The only problem is that Sarkozy clearly has no interest in initiating a socially accepted reform that has the support of the unions. In fact, such a reform has hardly been discussed at all. Basically, the outcome was announced before the beginning of any debate on the issue. The bill was endorsed by Sarkozy's cabinet at a meeting on July 13, in the middle of the country's summer vacation. Since then, its key points have been portrayed as non-negotiable.

In other words, the government -- and in recent months Sarkozy alone is ultimately France's government -- never sought the possibility of a sustainable, widely accepted solution. Instead, it used pension reform as a declaration of war against the unions, the Socialists and other adversaries. The intended message, from the very beginning, was that the administration was unwilling to collaborate with these elements, and that it was not going to allow anyone to water down its plans. There was certainly also a hope that the left would become radicalized again, which would deprive it of some of its appeal in the coming elections.

The outcome is now one-sided and warped. Workers, particularly civil servants, are taking on virtually the entire burden of the reform, while employers emerge largely unscathed. Worst yet, workers with extremely long contribution periods are penalized, women are put at a disadvantage and hardship cases are not sufficiently taken into account. It is, in a nutshell, a socially unjust reform. The manner in which it was (not) negotiated is, in a political sense, perhaps the greatest scandal of all, while the current turmoil is the logical consequence.

It was former President François Mitterrand who once noted that the exercise of the office of president in France amounted to a "permanent coup." Sarkozy is taking Mitterand's words at face value, as he tenaciously expands his power. His team of ministers has long been little more than an arm of the Elysee Palace, while Sarkozy's majority group in the French parliament has deteriorated into a club of presidential yes-men. Edwy Plenel, the head of a news website called Mediapart, now refers to Sarkozy as a "Caesar-like hyper-president," a man who gets his way "at any price, as fast as possible and, if necessary, by force."

Fears of a Misguided Transformation of French Democracy

The current strike and protest movement began on Sept. 7. Since then, millions have taken to the streets on a series of national action days, and by no means all the protestors were organized by unions, opposition parties and other organizations. Some of the people who are now getting involved have never taken part in protest marches before. They are the freshly politicized and unorganized who fear a misguided transformation of French democracy and are deeply suspicious of the supposed common sense that the French government prefers to invoke in place of the constitution today.

The opposition movement, the overwhelming majority of which is peaceful, is now being regularly joined by representatives of the disoriented youth of the low-income suburbs -- the same people that Sarkozy, when he was interior minister, referred to as "scum," and who Sarkozy, as president, has treated as scum. Now it seems that everything he had promised them, in the form of his so-called "Marshall Plan for the suburbs," has dissolved into lies and vanished into thin air. Now, not surprisingly, they are seeking the tumult of the street -- to set cars on fire, loot shops and smash windows. And it wouldn't be surprising if scenes like those that unfolded during the 2005 riots were repeated in the near future.

Nowadays, the uncomfortable truth in France is that everyone is constantly anticipating new eruptions, and that Sarkozy can never find a conciliatory word. He never even attempts to bring calm to the situation -- instead, he constantly manages to escalate things even more. And each new outbreak of violence is subsequently used as ammunition against the protesters.

Since the Roma expulsions began, Interior Minister Brice Hortefeux has behaved as if he were experiencing the most pleasant weeks of his life. Commenting on riots in Lyon last week, he said: "France does not belong to hooligans, to pillagers and hoodlums," although it wasn't quite clear whether he was also referring to the peaceful protesters as well. And Prime Minister François Fillon said, in reference to the ongoing strikes: "No one has the right to take a country hostage."