Euro-zone finance ministers and the International Monetary Fund reached a deal with Cyprus early Saturday morning on a bailout package for the country that has been the subject of dispute for months now. It will mark the first time that savers in a euro-zone country are required to participate in a bailout.

"The Euro Group was able to reach a political agreement with the Cypriot authorities on the cornerstones of this agreement," Euro Group President Jeroen Dijsselbloem said. "The assistance is warranted to safeguard stability in Cyprus and the euro zone as a whole," he said. Dijselbloem added that a letter of intent would be completed next week so that the deal could be approved by national parliaments.

International Monetary Fund chief Christine Lagarde said the fund would contribute to the bailout but did not specify the exact amount.

Initial reports suggest the bailout package, which will be provided by the long-term euro rescue fund, the European Stability Mechanism (ESM), will carry a total value of up to €10 billion ($13 billion). In return, Cyprus has pledged to recapitalize its ailing banks and clean up government spending. Without the bailout, the country would default in May.

The deal followed intense negotiations and the main sticking point during the 10-hours of talks had been the demand that savers at Cypriot banks also be required to contribute to the bailouts of the beleaguered financial institutions. Under the deal, any bank account holder in Cyprus with deposits exceeding €100,000 will be subjected to a one-off levy of 9.9 percent of their savings. Accounts with less than a €100,000 would be required to make a 6.75 percent payment. In total, the deposit tax is expected to generate around €5.8 billion.

Large sums of money have been deposited in Cypriot banks by foreign customers, particularly wealthy Russians and Brits. Russian oligarchs have billions in deposits in the banks, and almost half of the deposits in the country are believed to be from non-resident Russian citizens. Together, the country's banks hold close to €70 billion in deposits. Cyprus also agreed to raise the country's nominal corporate tax rate, the lowest in Europe, by 2.5 percentage points to 12.5 percent. But sources said the country would not be given a debt haircut.

The Cypriot government said Saturday it would cease electronic transfers to prevent savers from wiring money out of the country. And Jörg Asmussen, a German board member of the European Central Bank said that the amount of the one-time levy would immediately be frozen in all accounts in Cyprus. Banks in the country will also be closed on Monday because of a holiday. The Cypriot government is expected to pass a law this weekend approving the levy. "I assume that the levy can be applied before the banks reopen normally on Tuesday," Asmussen said.

A 'Fair Way of Sharing the Burden'

Cypriot Finance Minister Michalis Sarris said he hoped for a fresh start for Cyprus following the bailout. "It's not a pleasant outcome, especially for the people involved," he said. "This is a once and for all levy." He added that the tax would be a "very fair way of sharing the burden." He also said it had been necessary to "protect the general welfare of the people and the stability of the system".

In recent weeks, EU member states bitterly debated whether or not to give a bailout package to Cyprus. Germany had called for restraint in providing aid and also sought to impose conditions, including that of requiring savers to participate. The IMF, the Netherlands and Finland also supported Germany's position.

For the first time in the three-year euro crisis, Russia is also likely to participate in the bailout. European Economic and Currency Affairs Commissioner Olli Rehn said Russian Finance Ministry officials indicated they would consider easing the terms of a €2.5 billion loan paid to Cyprus two years ago. The repayment schedule could be lengthened and the interest rate lowered. Cypriot Finance Minister Sarris is expected to travel to Moscow to negotiate on Monday, a Cypriot diplomat told reporters.

Germany and other countries have been irritated by a combination of a low corporate tax rate and lax financial oversight that they claim has made Cyprus a haven for Russian money laundering to the tune of billions. Under the agreement, an independent private company will be installed in the country to observe Cyprus' adherence to the EU's anti-money laundering regulations.

The bailout package must still be approved by Germany's federal parliament, the Bundestag. Following Greece, Portugal and Ireland, Cyprus will become the fourth country to obtain a full bailout under the euro rescue effort. Spain is also receiving money, but only to recapitalize its ailing banks. 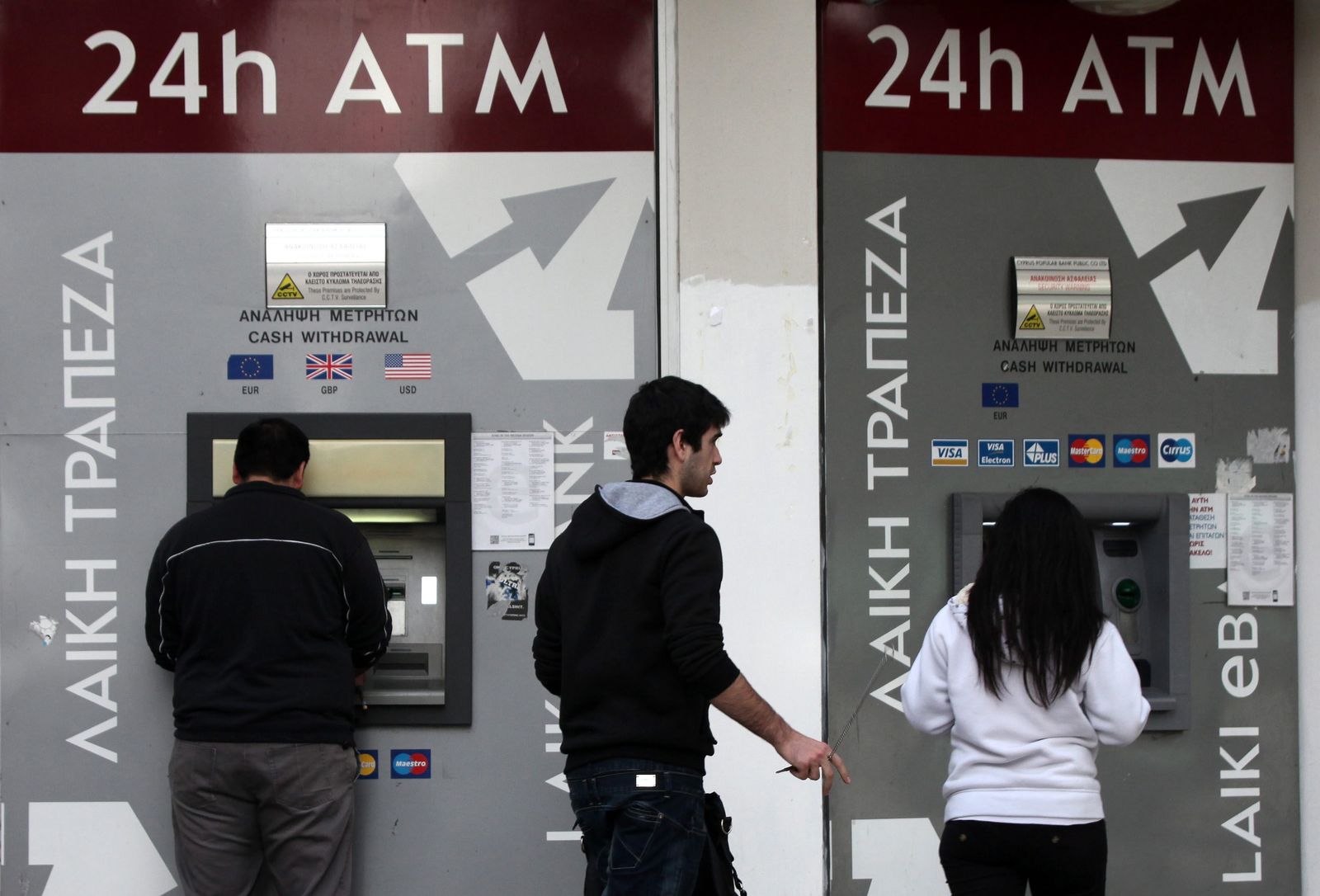 An automated teller machine in Nicosia, Cyprus: Under the terms of the bailout agreement, savers will be hit with a one-time levy.