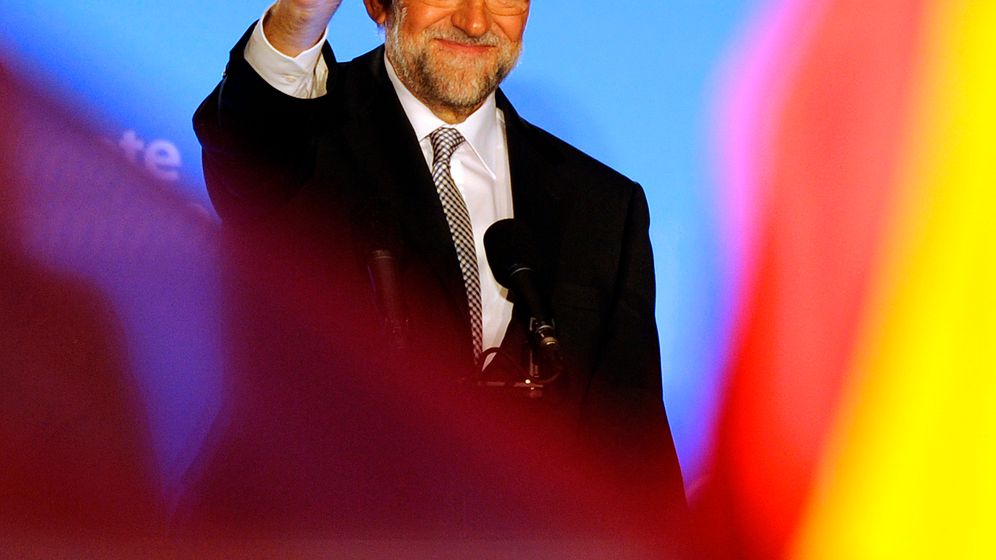 Outside the headquarters of the conservative Popular Party in Madrid, supporters enthusiastically waved the Spanish flag and light-blue flags with the party's white logo on Sunday night. But the election winners did not want to be seen celebrating their triumph excessively. Their country, after all, is mired deep in crisis.

PP leader Mariano Rajoy, 56, who is set to be Spain's next prime minister after his party won a convincing victory in Sunday's election, immediately announced a "concerted effort" by all Spaniards to fight the debt crisis. Rajoy, who was twice defeated in previous elections by the Socialist José Luis Rodríguez Zapatero, told his cheering supporters in Madrid that, given the difficult economic situation, "no miracle" could be expected. Spain would have to "win back respect" in Brussels, he added.

Not since the death of dictator Francisco Franco exactly 36 years ago has a Spanish prime minister and his party possessed as much power as Rajoy and the Popular Party does now. Since the municipal and regional elections in May, they control most of the major cities, half of all municipalities and 11 of the country's 17 autonomous communities, as Spain's states are called. And now, the PP has also easily secured an absolute majority in parliament. According to the preliminary results, the PP has won 186 of the total 350 seats in Spain's lower house. The PP got about 44 percent of the vote, compared to the Socialists' 29 percent.

The new strong man in Spain is anything but a charismatic man of action, however. Rajoy, a notary from the northwestern region of Galicia, has a reputation as someone who prefers to wait out problems rather than tackling them. By waiting patiently, he survived the party infighting which followed his election defeats by Zapatero in 2004 and 2008. In his new autobiography titled "In Confidence," written specifically for the campaign, he praised himself as a "totally normal person."

Rajoy first ran for a seat in the Galician parliament at the age of 26. The fact that he joined the PP, which was founded by Fraga Iribarne, a fellow Galician who had been a minister under Franco, had more to do with friendship than deep political conviction. His father, a judge, had dissuaded him from going into politics. Rajoy's way of thinking is thoroughly dominated by his legal background (his three younger siblings also became notaries). He does not like talking about subjects about which he is not well informed. When in doubt or when he is angry, Rajoy prefers not to speak at all -- and certainly not with the press. Rajoy, a tall, friendly man with a gray beard, is married to the economist Elvira Fernández and is the father of two sons. He would prefer to continue to live in a Madrid suburb, but now he will have to move to the prime minister's official residence in the Moncloa Palace.

Rajoy was always the reliable number two behind the prime minister of the boom years, José María Aznar, who was in power from 1996 to 2004. After Rajoy had led the Interior and Education Ministries to Aznar's satisfaction and had acted as government spokesman, his boss appointed him as his designated successor -- in the expectation that the conscientious but boring politician would pose no real competition, allowing Aznar a later comeback. But things have turned out differently.

Height of the Crisis

The plan is for the new parliament to meet for the first time in Madrid on Dec. 13, with King Juan Carlos swearing in Rajoy and his government before Christmas. It remains unclear, however, who the members of the cabinet will be. The taciturn Rajoy has not even named a candidate for the important Economic and Finance Ministry. At the end of the election campaign, he asked the markets to give him "more than half an hour" breathing space. He will not have much time to experiment with approaches to fighting the crisis, though.

The election took place at the high point of the worst economic crisis Spain has seen in decades. Last week, the risk premium on 10-year government bonds -- the difference in interest rates compared to benchmark German bonds -- shot up by almost 500 basis points, with yields hitting almost 7 percent, a level that is considered unsustainable. Since the bursting of the construction bubble three years ago, unemployment has risen to 21.5 percent. Almost half of young people under 25 have no jobs. And the outlook is grim, with further job losses expected next year.

Brussels also no longer believes that Spain can get its budget deficit down to 6 percent in 2011. Last year, it was equal to 9.2 percent of gross domestic product. The outgoing Socialist government had to cut its growth forecast for 2011 to 0.8 percent.

Rajoy has committed himself to reducing the budget deficit to 4.4 percent in 2012. He is impressed by the austerity course of his fellow conservative, German Chancellor Angela Merkel. He made a pact with Zapatero in September to enshrine a so-called debt brake on the German model in the Spanish constitution, which will introduce a limit on the country's structural deficit.

Vague about the Details

Rajoy was deliberately vague about how he wanted to achieve the savings targets, however, in order to avoid deterring any potential voters. He said he wanted to "roll out the red carpet" to entrepreneurs so that they would create jobs. To achieve that, he wanted to first reduce corporate tax, followed by capital gains tax later. But social benefits will be maintained, and pensions are definitely not to be touched.

In other words, Rajoy needs to square the circle if he wants to achieve savings of €17 billion in the 2012 budget. That is what is required in order to reach the deficit target.

The voters have more faith in the conservatives' crisis management and have punished the Socialists, who lost 59 seats. But anyone who believed Rajoy's promises that the country's finances could be sorted out painlessly will experience a rude awakening. The future prime minister has not yet revealed any details, but austerity measures enacted by his Popular Party colleagues in the autonomous communities provide some hints. There, cuts have been made primarily in education and health care. The election manifesto spoke of "public-private collaboration," but the privatization of some basic services seems likely. The bureaucracy too needs to be slimmed down. Rajoy predicted that he would have to spend less on the unemployed, "because fewer people will have the right to receive support."

Rajoy has to accelerate the reform of the financial sector and force more mergers of the country's ailing savings banks, which have toxic mortgage loans on their books. The new conservative government wants to pass further labor market reforms before the summer. Companies had already demanded such reforms from the incumbent Socialist government.

In the future, collective bargaining should be more focused on the needs of individual firms, rather than conducted centrally for each industry. This could make it easier to cut wages, which experts believe is the best way to boost productivity.

Rajoy is hoping that the entrepreneurs he is pandering to will then create jobs, finally getting the economy going. He must be aware that his government could be faced with labor disputes and strikes as a result. So far, however, the unions have responded to the EU-imposed austerity measures with restraint.

Will the Left Split?

The Socialist party's candidate, Alfredo Pérez Rubalcaba, 60, had warned against a conservative landslide, fearing that the right-wing camp would walk away with "absolute power" on top of an absolute majority of parliamentary seats. The conservatives, he said, had never lost their dominance in industry and in the media, even after the end of the dictatorship. Rubalcaba said he wanted to get enough votes for his PSOE party so that he could exercise effective control from the opposition benches. But on Sunday many potential Socialist voters stayed home, and turnout fell to about 71 percent.

In the coming weeks, Rubalcaba will have to decide whether to remain on as opposition leader, or retire from politics after 30 years. At their party congress planned for the beginning of the new year, the PSOE has to find a new leader to succeed Zapatero. Carme Chacón, a Catalan politician who is currently defense minister, has already thrown her hat into the ring.

After the conservatives' landslide victory and a strengthening of smaller parties like the Communist-dominated United Left, political observers see the danger that the greatly weakened PSOE could split. The party will not oppose the austerity measures in parliament, if they are supposed to help Spain stay in the euro zone.

But the left wing of the Socialist party could ally itself with the protest movement of the so-called Indignados, the young people who are fighting against the perceived dictatorship of the banks and financial markets. Many young people in Spain feel they are not represented in the country's political system. As a result, young voters stayed at home, cast invalid votes or placed empty envelopes into the ballot box. They feel that they are being forced to take action outside the established parliamentary democracy system.

Is Spain finally on the verge of a societal revolt of the kind that other European countries experienced in 1968? If young people find themselves suffering at the hands of further austerity measures imposed by the conservatives and supported by the Socialists, then the protest movement on the streets could become the country's main opposition force. So far the protests have remained non-violent. But observers fear that could change.