German Chancellor Angela Merkel is walking a tightrope. And on Wednesday, one day before European Union leaders gather in Brussels for consultations on the ailing common European currency, the euro, one could almost see her struggling to retain her balance.

Speaking in front of the German parliament in Berlin, Merkel sang the praises of the "extraordinary ideas of peace and freedom which provide the foundation of European unity." It is a legacy, she went on, "to which I feel personally beholden."

Fine words, to be sure. But there are some in Germany who have found cause to doubt the sincerity of Merkel's commitment to the European Union. The German chancellor, after all, has become a stick in the deep mud of the ongoing euro crisis, one which has seen country after country fall victim to skyrocketing interest rates on government bonds, making borrowing on the international financial markets virtually impossible.

Merkel, though, has seemed unmoved. While Germany made a large contribution to the Greek bailout package in the spring, and to the massive, €750 billion ($990 billion) common currency backstop established earlier this year, Berlin has shown little interest in increasing or extending that fund. The idea of a European bond -- one which would bundle the debt of European countries, thus making it more affordable for troubled states to borrow on the bond market -- has likewise found little support in Merkel's Chancellery.

Her stance has not been popular in other European capitals. Luxembourg Prime Minister Jean-Claude Juncker has accused her of "thinking a little simply" and said she was displaying an "un-European manner." His foreign minister, Jean Asselborn, went even further in an interview on Wednesday, blaming Germany of "haughtiness and arrogance."

And the demands keep coming. On Wednesday, Spanish Finance Minister Elena Salgado insisted that the €750 billion fund, known as the European Financial Stability Facility (EFSF), be enlarged -- a position supported by several countries in the euro zone. The idea mentioned in some European capitals is to double the size of the fund, to €1.5 trillion. Salgado also floated the idea that the EFSF could buy sovereign bonds from troubled countries, much as the European Central Bank has been doing.

The proposal, much like Merkel's rejection of all such measures, is somewhat self-serving. The ratings agency Moody's said on Wednesday it may downgrade Spanish debt rating in the near future, saying it was concerned about Spain's 2011 funding needs and mounting debt.

There is, in short, plenty to discuss at the European Union summit on Thursday and Friday. SPIEGEL ONLINE provides a brief cheat sheet.

When the EFSF was launched in May, it was hailed as a robust European response to widespread speculation on skyrocketing debt in several euro-zone countries, most prominently, Greece, Ireland, Portugal and Spain. The establishment of the fund came just days after the EU had agreed on a €110 billion bailout for ailing Greece. The EU, it seemed at the time, had found a tough response to a growing threat.

The early optimism, however, proved to be misplaced. The EFSF, after all, is only a temporary mechanism, and is set to expire in 2013. Without a plan in place to replace the EFSF, the euro zone could simply return to a state of affairs similar to that which existed last year -- high sovereign debt in some countries, wobbly budgets and no safety net.

Indeed, it is the ongoing debate about what might succeed the EFSF which has unsettled markets this winter and made the European Union look hopelessly divided and unable to meet the sovereign debt challenge. Some have even accused German Chancellor Angela Merkel of having driven Ireland into financial dire straits by openly demanding a mechanism allowing for national bankruptcies within the euro zone which would pass some potential losses on to private investors. Interest rates on Irish bonds spiked as a result, and on Wednesday, the Irish parliament agreed on taking out a €67.5 billion loan from the EFSF.

Germany, however, is strictly against such a plan. As the European Union's largest economy, Germany would be the primary financier of any such permanent bailout mechanism. Following the populist attacks in Germany against the Greek bailout in the spring, Merkel is wary of any plan that involves Berlin pledging yet more money to prop up indebted euro-zone countries. Indeed, one of her closest allies -- Horst Seehofer, head of the Christian Social Union, the Bavarian sister party to Merkel's Christian Democrats -- has been one of the most vocal opponents of such proposals.

Another idea which has been frequently floated in recent weeks has been that of a European bond. The idea is relatively simple: Instead of each individual country issuing its own debt, European debt would be bundled. The result would be added stability for highly indebted countries like Greece, Ireland and Portugal. Because all euro-zone countries together would guarantee such bonds, they would be significantly less attractive as playthings for financial speculators.

Recently, interest rates on Irish bonds, for example, spiked upwards as fears rose that Ireland might default on its debt. Had Irish debt been bundled together with German and French debt, however, the chance of default would have been miniscule and interest rates would have remained affordable.

Both Berlin and Paris have expressed their vehement opposition to a Euro-bond. Merkel, in particular, is skeptical of such a bond as it would increase German borrowing costs, which are among the lowest in Europe due to the strength of the German economy. Once again, Germany sees the Euro-bond as just another mechanism to get Germany to back indebted euro-zone countries.

Indeed, because Germany and France were so opposed to the Euro-bond, the idea didn't even make it on to the agenda of the EU summit this week. Luxembourg Prime Minister Jean-Claude Juncker, however, has said he will bring it up nonetheless. In response, CSU General Secretary Alexander Dobrindt blasted Juncker on Wednesday and said that his Euro-bond was nothing more than "a codeword for plundering Germany's tax revenues."

Both German Chancellor Angela Merkel and her coalition partners from the business-friendly Free Democrats have insisted that any long-term debt mechanism must not be made up exclusively of carrots, but needs a stick as well to encourage stricken countries to clean up their public finances. As such, Merkel would like to see a post-2013 crisis mechanism allowing for national bankruptcies within the euro zone.

Her plan calls for International Monetary Fund involvement as well as strict conditions being imposed on any countries in need of financial assistance. Furthermore, private creditors would be involved in debt restructuring "on a case by case basis" -- meaning that investors stand to lose.

Originally, Merkel's concept included a mandatory involvement of creditors in all cases as well as the suspension of European voting rights for the countries in question. Following talks with French President Nicolas Sarkozy, however, Merkel backed off from some of her more severe demands.

Still, her public musing about the involvement of creditors in national bankruptcies did little to increase confidence in the euro. Many lost sight of the fact that her plan was only to take effect once the EFSF expired in 2013, and investors began a massive sell-off of Irish debt that led to a worsening of the euro crisis.

The blunder opened Merkel to criticism that she is not the committed European she claims she is. Germany's leading opposition party, the center-left Social Democrats, accused her on Wednesday of turning her back on Europe.

Similar criticism has come from elsewhere as well. "The direction of the EU must be supported by all 27 together and must not be dictated by the big countries," Luxembourg Foreign Minister Asselborn said on Wednesday.

There is little to indicate that Merkel might be willing to compromise at this week's summit. Most expect her to do what she can to push through her crisis mechanism and further oppose both the Euro-bond idea and an extension of the EFSF. She remains convinced, after all, that there is no rush.

Plus, her plan would take time to implement in the first place, requiring as it does a slight change to the wording of the Lisbon Treaty -- a change that would require the approval of all 27 European Union member states.

Billionaire investor George Soros is just one of many who think that Europe needs to act quicker than that. "It is better to inject equity now rather than later and it is better to do it on a Europe-wide basis than each country acting on its own," Soros wrote in a recent contribution for the Financial Times.

Should it not, he continued, the threats facing Europe are significant. There is a risk, he wrote, "that the euro may destroy the political and social cohesion of the EU." 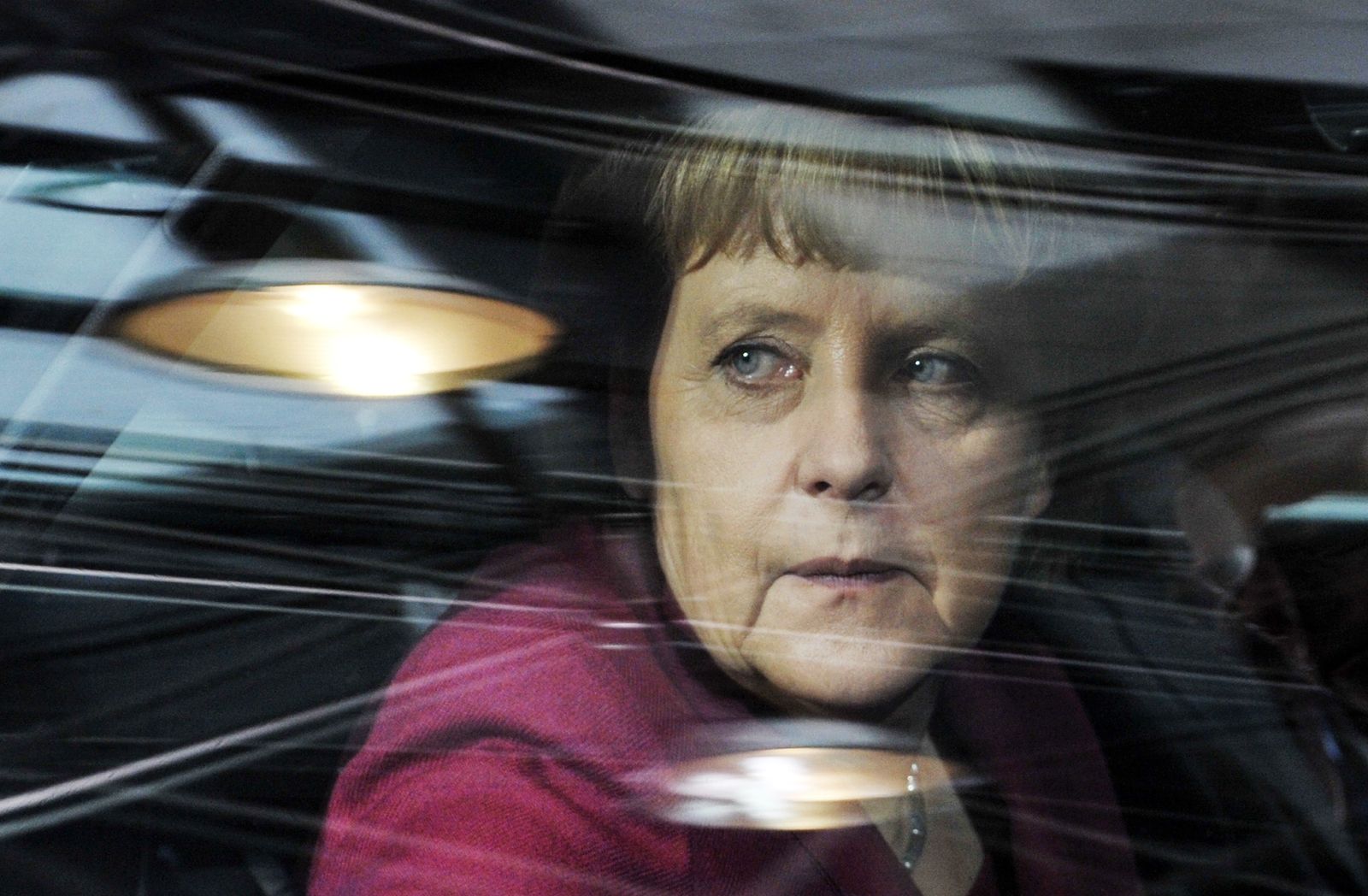 German Chancellor Angela Merkel is under fire in Europe these days for her opposition to plans aimed at propping up the euro.