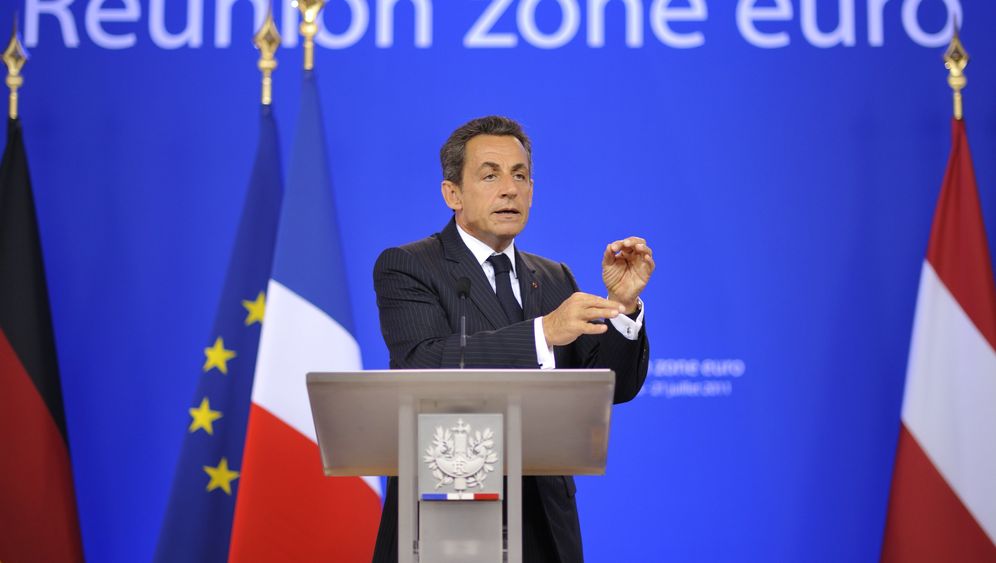 Photo Gallery: A Lifeline for Greece

In the end, there were important resolutions to announce after all. Euro-zone heads of state and government agreed on Thursday evening to a second emergency aid package for Greece "and some other things," said German Chancellor Angela Merkel following the special summit of the 17 euro-zone member states in Brussels. She exuded satisfaction and said it had been an "important day."

In the weeks prior to the summit, Merkel had repeatedly insisted that there was no need for the special summit and she made it clear that she was not enthusiastic about participating. As recently as Tuesday, she warned that one should not expect any "spectacular" moves. And the Thursday agreement does indeed fall short of being spectacular, but it provides the clarity that was so badly needed.

The new package provides for €109 billion worth of credit for Athens. The majority of the fund comes from the euro backstop fund known as the European Financial Stability Facility (EFSF) and from the International Monetary Fund (IMF). Private creditors are to contribute an additional €50 billion by 2014 via a combination of debt buybacks and swaps. The level of private involvement in the plan is much higher than had been expected and reflects the position that Germany had been insisting on for months. It can be seen as a personal success for Merkel.

At the same time, the EFSF is to be granted additional, pre-emptive competencies to prevent the euro crisis from spreading to additional countries. Among other measures, the EFSF will have the ability to buy state bonds on secondary markets -- from banks and insurance companies for example -- in order to support debt-ridden euro-zone countries. It is a further step in the direction of the kind of transfer union that Germany has long insisted must be avoided.

Euro-zone leaders were eager to avoid such bond purchases becoming business-as-usual. Prior to taking such a step, the European Central Bank must identify a country's debt predicament as being extreme and all euro-zone member states must grant their approval. Each national government would hold veto rights. But the new EFSF powers meant that French President Nicolas Sarkozy also had something to celebrate. "We have agreed to create the beginnings of a European Monetary Fund," Sarkozy crowed.

The moves do indeed mean that the EFSF increasingly resembles the Washington-based IMF. It will now be allowed to grant pre-emptive lines of credit to countries under pressure on the financial markets. It will also be allowed to assist in the recapitalization of stricken banks. Even Merkel, who had long been opposed to the idea of a European Monetary Fund, allowed that "one could draw such a comparison" to the IMF.

Reaction to the deal on the financial markets was one of relief that Europe, after months of disagreement, had finally thrown Greece a second lifeline. It became increasingly apparent throughout July that postponing the decision until after the summer holiday period -- as had initially been the plan -- was impossible. Risk premiums on Italian and Spanish state bonds have risen in recent weeks, raising the prospect that the crisis could infect those two major economies. The very public debate regarding potential state insolvencies and debt restructuring had made investors uneasy.

"For the first time since the beginning of this crisis, we can say that the politics and the markets are coming together," said European Commission President Jose Manuel Barroso on Thursday evening.

Strongly Against the Move

The plan presented in Brussels on Thursday evening is a classic French-German compromise. Sarkozy relented on the question of private involvement -- prior to his Wednesday meeting with Merkel in Berlin, he had been strictly opposed. Merkel, for her part, relented in her opposition to broadening the powers of the EFSF. Her coalition partners in Berlin, the business-friendly Free Democrats (FDP), had been strongly against such a move.

Indeed, the breakthrough for Thursday evening's agreement came during the Merkel-Sarkozy meeting in Berlin, a seven-hour marathon of discussions -- parts of which were attended by ECB head Jean-Claude Trichet -- that ended just after midnight. European Council President Herman Van Rompuy also joined the talks by phone.

Merkel's vice chancellor, Philipp Rösler, who is head of the FDP, did his part from the shores of the Baltic Sea, where he is currently vacationing. Merkel asked Rösler to keep Dutch Prime Minister Mark Rutte informed of the German government's position. Rutte then passed on that information to the smaller euro-zone member countries. By keeping them informed, Merkel wanted to avoid the impression that France and Germany were moving ahead on their own -- as happened after Merkel and Sarkozy met in Deauville in 2010. During those talks, the two leaders had agreed on stricter rules for those who violate European Union budget deficit regulations.

The strategy would seem to have worked -- the 17 euro-zone countries quickly agreed to the German-French proposal. Still, the leaders shied away from taking the dramatic step of slashing Greek debt via a so-called "debt haircut." Many experts, however, feel that such a step will ultimately become necessary as part of a lasting solution to the Greek debt crisis.

But euro-zone leaders did seem to be leaning in that direction. The involvement of private creditors in the new aid package means that the level of Greek debt, which currently stands at 160 percent of annual economic output, will fall by 12 percentage points. The interest rate which Greece must pay on its loans from the EFSF was also reduced to 3.5 percent, a move which will lower its debt load by an additional 12 percentage points.

Decisive for the success of the summit was the approval of the European Central Bank. The ECB had long been strictly opposed to any involvement of private creditors because they didn't want to take the risk that rating agencies would see such a move as a Greek default. Now, however, the ECB has allowed Greek debt swaps under certain conditions.

Owners of Greek bonds are to be given the opportunity this autumn to exchange those bonds for new paper guaranteed by the EFSF. The exchange is to take place within a predetermined window of time, likely to be just a few days. The new bonds are to have periods from between 15 and 30 years with an interest rate of 3.5 percent. That, euro-zone leaders hope, will give Greece enough time to get back on its feet.

The plan will likely lead rating agencies to downgrade Greece to default status for several days this autumn. But government leaders consider the risk to be manageable. Once the new bonds, guaranteed by the EFSF, are issued, Greece will be upgraded again -- according to the plan, at least. How exactly the markets will react, however, remains to be seen.