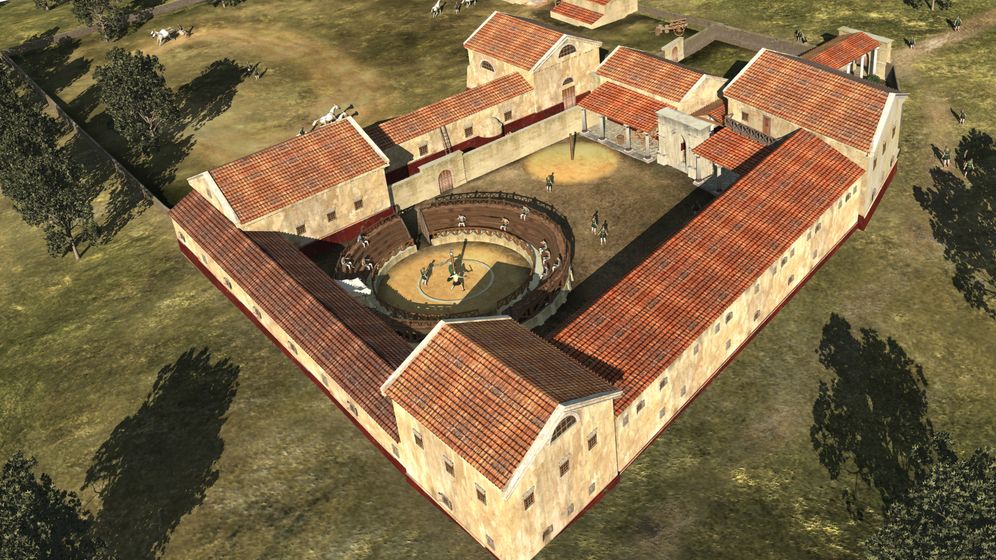 It remains underground, but archaeologists in Austria believe they know what lies below. Some 40 kilometers (28 miles) east of Vienna they have mapped out the ruins of a Roman gladiator school using a special radar, the team announced on Monday.

The facility, in what was then the Roman Empire's outpost of Carnuntum, is likely the best-preserved of its kind, comparable to gladiator schools found in Rome and Pompeii, according to the geophysicists, computer specialists and archaeologists from the Ludwig Boltzmann Institute for Archaeological Prospection and Virtual Archaeology. Still, no plans are in place for excavations to begin. Officials are trying to agree on how to best preserve the site, first.

"We know what is under the ground," Franz Humer, head of the Carnuntum Archeological Park, told SPIEGEL ONLINE. "We can wait." The non-invasive radar technology provided by the institute enabled them to detail the structures without undertaking a costly and time-consuming dig.

Geophysicists had already discovered evidence of a promising structure in 1996, Humer said. "But the prospecting methods weren't as good back then. Only in the last few years as they became more detailed were we able to begin understanding what we were dealing with."

Specialists at the institute used a motorized multi-antenna ground penetrating radar to deliver spectacular images that help reconstruct the lives of the gladiators on the 11,000-square-meter (13,160-square-yard) site. The breathtaking details include a circular training arena with wooden stands for spectators, a heated training arena for winter, a bathing area and some 40 cramped gladiators' cells of just five square meters.

"There's even a post in the center of the arena," Humer gushes, explaining that gladiators are known to have used the wooden columns as mock opponents during training. "Other archaeologists have found postholes used for the posts, but we have found an entire preserved post."

Around 1,700 years ago in the middle of the third century, the demand for well-trained gladiators in military and trading outpost was likely substantial. The city of some 50,000, home to both Roman soldiers and civilians, had two ampitheaters for residents' entertainment. One of these, located right next to the newly discovered gladiator school, was used for men to exhibit their skill at the bloody sport.

Another key detail discovered by the radar shows that many of the gladiators probably died pursuing glory. "Particularly exciting is a field of graves we've found right near the school that is set apart from the regular graveyard a bit," Humer says. "It is possible that we actually have a gladiator cemetery here."

Many gladiators were criminals or prisoners of war who shared the status of slaves. They put on fighting exhibtions to entertain crowds and often fought to the death. Despite their lowly position, gladiators often gained celebrity for their brave feats on the field, and were particularly popular with the ladies. Further evidence of this adoration has been found in the special cemetery, which is furnished with elaborate tombs when compared to the more modest burial plots in the neighboring graveyard.

But not all gladiators were killed. "If they were successful, they had a chance to advance to 'superstar' status, and maybe even achieve freedom," Humer told news agency AP.