Are some European countries in danger of splintering? It is a question many on the Continent and in the United Kingdom are asking this week in the wake of renewed indications that some separatist movements might be gaining ground.

The most recent step forward for one such movement came on Monday, when British Prime Minister David Cameron signed an agreement with First Minister Alex Salmond of Scotland, paving the way for a Scottish independence referendum in 2014. Although a recent survey suggested that just 32 percent of Scottish voters will support independence, the agreement is being hailed as historic.

Potentially more momentous, however, are the municipal election results in Belgium, which saw the party of Flemish separatist Bart De Wever make significant gains across the northern part of the country. Furthermore, De Wever will now become the mayor of Antwerp, Belgium's second-largest city.

The success of De Wever's NV-A party comes as something of a surprise. Just six years ago, the party received little support in municipal elections. But by 2010, it had become a strong force, emerging from a national vote as the biggest party in the region.

De Wever received 37.7 percent of the vote in Antwerp on Sunday against 28.6 percent for the Socialist incumbent Patrick Janssens. De Wever campaigned on a platform of more autonomy for Flanders, the Dutch-speaking northern part of Belgium. He has long criticized Belgian tax policies, which see a significant share of revenue effectively transferred from the prosperous Flemish north to the struggling French-speaking south of the country. The Flemings make up 6 million of the country's 11 million residents.

In his victory speech on Sunday, De Wever directed comments at the country's French-speaking Prime Minister Elio Di Rupo. "Your taxation government without a majority in Flanders is not backed by Flemings. Let us work together on a reform that gives Flemings and francophones the government that they deserve," he said. He demanded that Di Rupo work toward the establishment of a looser confederation between Flanders and the French speaking regions of Belgium.

German editorialists on Tuesday take a closer look at the municipal elections in Belgium.

"The agenda in the complex, multilingual country appears clear: There will once again be an atmosphere of crisis between the parties representing the various language groupings. And one more thing is clear: The talk about the "end of Belgium" will begin once again. It is not as if it will happen right away. But you don't have to be a prophet to see that there is a time bomb lurking beneath the federalist government of Elio Di Rupo, a coalition that was formed with great effort hardly one year ago."

"When it comes to the meaning of the municipal elections on Sunday, De Wever and his N-VA party never left a doubt that it was about more than just the Antwerp city hall…. Belgian parliamentary elections are once again scheduled for 2014. And the Flemish lion, revered so obsessively by De Wever's supporters, is not yet sated."

"The disappearing solidarity between the economically powerful Dutch-speaking region of Flanders and the struggling French-speaking Wallonia is symbolic of the vanishing solidarity between Europe's north and south. Belgium's debate over federalism means that the country faces a decision that has meaning for the European Union and its future -- either a weak center with weak state structures as exist in Belgium, or a strong federalist center as in Germany or Austria. How De Wever and the centrifugal forces exerting pressure on Europe are dealt with will determine the EU's future."

"It was more than just a mere municipal election in Belgium. Flemish nationalist Bart De Wever made that clear following his victory in the mayoral election in Antwerp…. Even before the election he had said that following the Oct. 14 vote nothing would be same in the country. He immediately demanded a national reform and the creation of a confederation."

"One could ignore this as subnational gimmickery in a chronically weak country. But similar voices can be heard in Scotland, Catalonia and South Tyrol. In a precarious situation in the heart of the euro crisis, these new regionalist movements represent the danger of renewed political instability." 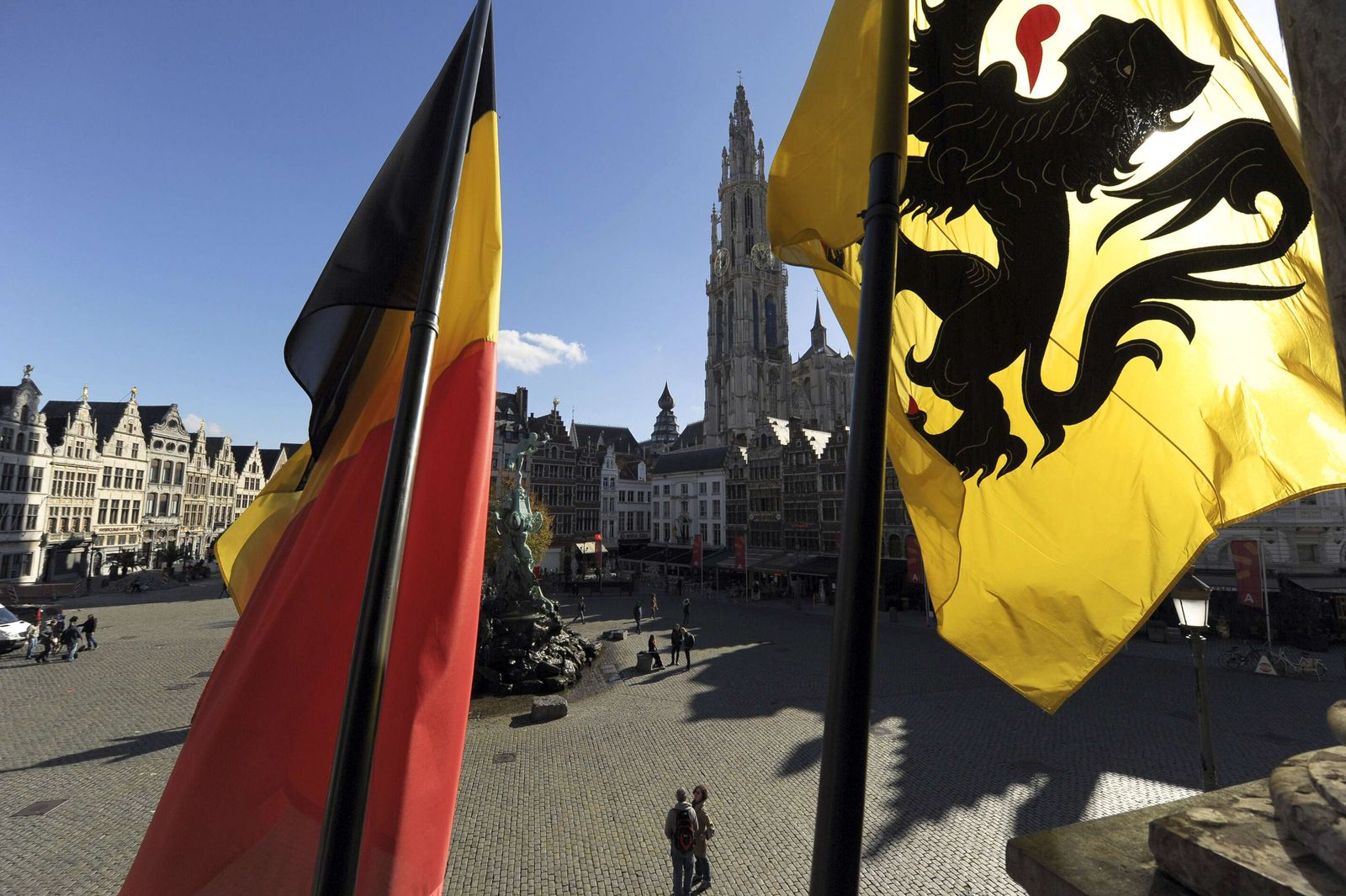 The Belgian and Flemish flags in the main square in Antwerp. Whither Belgium.