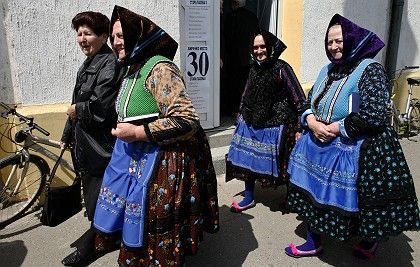 Female voters in the village of Stara Pazova in Serbia

Serbian President Boris Tadic's pro-European party has won snap parliamentary elections in Serbia in what election observers are calling a "very convincing victory." A projection by the monitoring organization Center for Free Election and Democracy (CESID) shows Tadic's Democratic Party taking 38 percent of the vote. The outcome came unexpectedly, after polls and analysts predicted his party would lose.

Tadic declared victory for his Democratic Party (DS) on Sunday evening. "Serbs have undoubtedly confirmed a clear European path. This is a great victory," he said. At the same time, he warned: "The government we are building will not recognize Kosovo."

Ultranationalist Tomislav Nikolic of the Serbian Radical Party (SRS), which favors closer ties to Moscow, warned Tadic that the pro-Europe camp hadn't won yet. He said his party also had very clear possibilities for creating a coalition that would not include the Democratic Party.

Nikolic accused Tadic of inciting violence by declaring victory. He called on other nationalist parties to join forces to create a coalition government and said that the Radicals would soon begin negotiations with incumbent Prime Minister Vojislav Kostunica's Democratic Party of Serbia (DSS). Other parties that could join forces with the Radicals to stymie Tadic's victory include the Socialist Party of former Serbian and Yugoslavian President Slobodan Milosevic.

According to exit polls, the anti-European camp scored 48 percent of all votes. The Radicals, which drew voters outraged by the United States-backed secession of Kosovo, scored 29 percent. With 11 percent, Kostunica's nationalist conservative DSS party came in third. The Socialist Party came in fourth with 8 percent. The pro-west Liberal Democratic Party (LDP) will also be represented in parliament. But it remained unclear on Monday how the next Serbian government might look.

The European Union welcomed the election outcome. The EU is very pleased that Tadic's party will be playing a stronger role in the future, Slovenia, which holds the rotating presidency of the bloc, said in a statement. "The pro-European side in Serbia won, which was what we were aiming for in the EU," said Slovenian Foreign Minister Dimitrij Rupel. 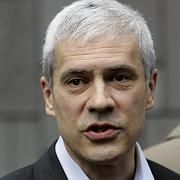 Sunday's snap election was widely considered to be a referendum on the Balkan state's future political course with Europe. Tadic's party wants to see rapid rapprochement with the European Union and full membership as quickly as possible. But Prime Minister Kostunica has other intentions, having announced he would nullify the pre-membership Stabilization and Association Agreement (SAA) recently signed with the EU. The deal, offered just before the vote in an effort to mobilize pro-European forces in Serbia, paves the way for accession negotiations to begin for EU membership.

At the beginning of March, Kostunica dissolved parliament and called for new elections after the coalition failed to reach an agreement on whether to tie the issue of Kosovo's secession to EU membership. The government was barely 10 months old and included Tadic's Europe-friendly Democratic Party, representatives of the business-friendly G17 Plus party as well as Kostunica's nationalist conservative DSS and its partner party, NS.

"I hope that those who hold on to a European future for Serbia will prevail," said German Foreign Minister Frank-Walter Steinmeier of the Social Democratic Party (SPD).

Tadic now has 90 days under the Serbian constitution to form a government. If he is unable to, then the constitution stipulates that the second-biggest party, in this cas the Radicals, would be given a chance.