The German chancellor, who is often viewed as overly hesitant, wanted to be proactive rather than reactive for once. A change had to happen, and had an idea. Together with France's President Nicolas Sarkozy, the chancellor presented a new plan at the latest European Union summit to restore the euro zone's health. The "pact for competitiveness" was a daring move on the chancellor's part. Her message was clear: Look at me, I'm a leader.

In an internal discussion, the president of Germany's Bundesbank indicated he would not run for a second term as the central bank's head and, more importantly, that he would not seek to head the European Central Bank (ECB) in Frankfurt. Journalists apparently knew about Weber's plans before Merkel did, even though he was her desired candidate to lead the critical European Union institution. The chancellor had been duped and, once again, forced onto the defensive.

What's wrong with Merkel's EU policies? Early on in her time as chancellor, she seemed to have a strong grasp on EU politics. It seemed easy for her, as if she could do it with her hands tied behind her back. If things were going badly back at home, Merkel could always count on a boost on the global stage -- her diplomatic abilities were admired far and wide. The international press christened her "Madame Europe" and even "Miss World."

That was the past, though. Now she appears to be having difficulty making things happen. Often she gets into trouble as soon as she dares to go on the offensive. Either small countries rebel against her views on stringent austerity measures or the president of the European Commission openly opposes her position on the Stability Pact for Europe's . Merkel wants to save the euro, but voter skepticism is growing by the day. Many Germans see the European project as too expensive. On top of that, Merkel's preferred candidate for -- of all posts -- the head of the EU institution that is responsible for ensuring monetary stability is now running for the exit.

Weber's departure and decision not to assume the presidency of the ECB is symbolic of the chancellor's hapless European policies. It is also dangerous because it threatens to damage Merkel's authority elsewhere in Europe. At the very least, it creates a bad impression when, in the midst of the euro crisis, the man hand-picked by Merkel to head the ECB decides not to enter into the running. The commentaries in even the most government-friendly of German newspapers were devastating in their assessments on Friday. Die Welt describes the development as "chaos," with the Frankfurter Allgemeine Zeitung calling it a "farce." The business daily Handelsblatt even goes so far as to describe it as a "field of ruins."

So far, the wrong-footed chancellor has remained silent on the issue, but on Friday she met with Weber, before announcing through her spokesman that Weber would step down from his Bundesbank post at the end of April. Of course she is angry, but what can she do? Name a substitute candidate from Germany for the post? Sources in the government say that would be a difficult sell. Any substitute candidate, regardless how well qualified, would be considered second best -- and that is unimaginable in the context of the current euro crisis. At this point, Germany is likely going to have to deal with the fact that it will probably have to cede the prestigious post it had hoped to secure for Weber to a candidate from another EU member state.

'A Severe Blow for Merkel'

In parliament, the anger over Weber's decision was palpable among leaders of the coalition government parties on Friday, who didn't appear prepared to give up the position. "Now we need to find someone quickly who can credibly represent our position at the helm of the ECB," said Michael Fuchs, the deputy head of the parliamentary group of Merkel's conservative Christian Democrats. And Volker Wissing, the financial spokesperson for her junior coalition partner, the business-friendly Free Democratic Party, warned: "Germans need to continue to push through their goal of an independent ECB and monetary stability."

But it will be difficult to drive too hard a line, and the chancellor is very aware of that fact. Green Party officials are already describing it as a "clear defeat" for Merkel on the European stage. And Frank-Walter Steinmeier, a former chancellor candidate and the current floor leader for the center-left Social Democrats, said: "This is a severe blow for Angela Merkel and a vote of no confidence on her European policies."

Recently, Merkel has made herself an easy target of her critics' salvos. Since the euro crisis descended on the continent, much of the chancellor's former gloss has faded.

Members of the German parliament have long complained about Merkel's sudden changes of direction. Her junior coalition partners in the FDP had a great deal of trouble supporting the multibillion euro bailout package, and they outright reject the idea of an economic government. And they are angry now because, they say, the chancellor didn't discuss the "pact for competitiveness" with them in advance.

Complaints within Merkel's own party have mostly been expressed in hushed tones, but even within the CDU, many people increasingly feel poorly informed and are finding it tougher to ignore what they feel is a sleight of hand. The chancellor, however, doesn't appear to want to take a more open approach. Merkel recently blocked a relatively harmless internal paper within her parliamentary group, titled "Stable Euro, Strong Europe," because she said it needed to be adjusted. Merkel wanted to ensure that overly rigid positions didn't find their way into the document, sources said.

Merkel's troubles are also attributable to her style of governing, specifically her habit of not committing to anything until she has to. On the one hand, her radical pragmatism gives her massive room to maneuver. On the other hand, though, it makes it impossible for her to have political vision. As a result, the impression is created that Merkel reacts to events rather than actually leading. That often means that she is left with little time to explain her policies in a credible way. And on the rare occasions that she actually has a broader vision, it often gets lost in vagaries.

The pact for competitiveness could soon meet a similar fate. Almost all of the points envisioned for improving coordination of EU economic policies -- be it through balanced budget acts modelled after Germany's "debt brake," adjusting retirement ages to demographic developments or creating unified corporate taxes -- will face resistance somewhere in Europe. And Merkel knows that pushing through a strategy paper with nice-sounding targets will be a lot easier than implementing the concrete measures that will have to follow later.

At the next EU summit in Brussels in March, Merkel wants to pitch her economic policy goals. But she can expect a strong headwind of opposition. The announcement this week that Bundesbank President Weber will step down will do nothing to strengthen her position. 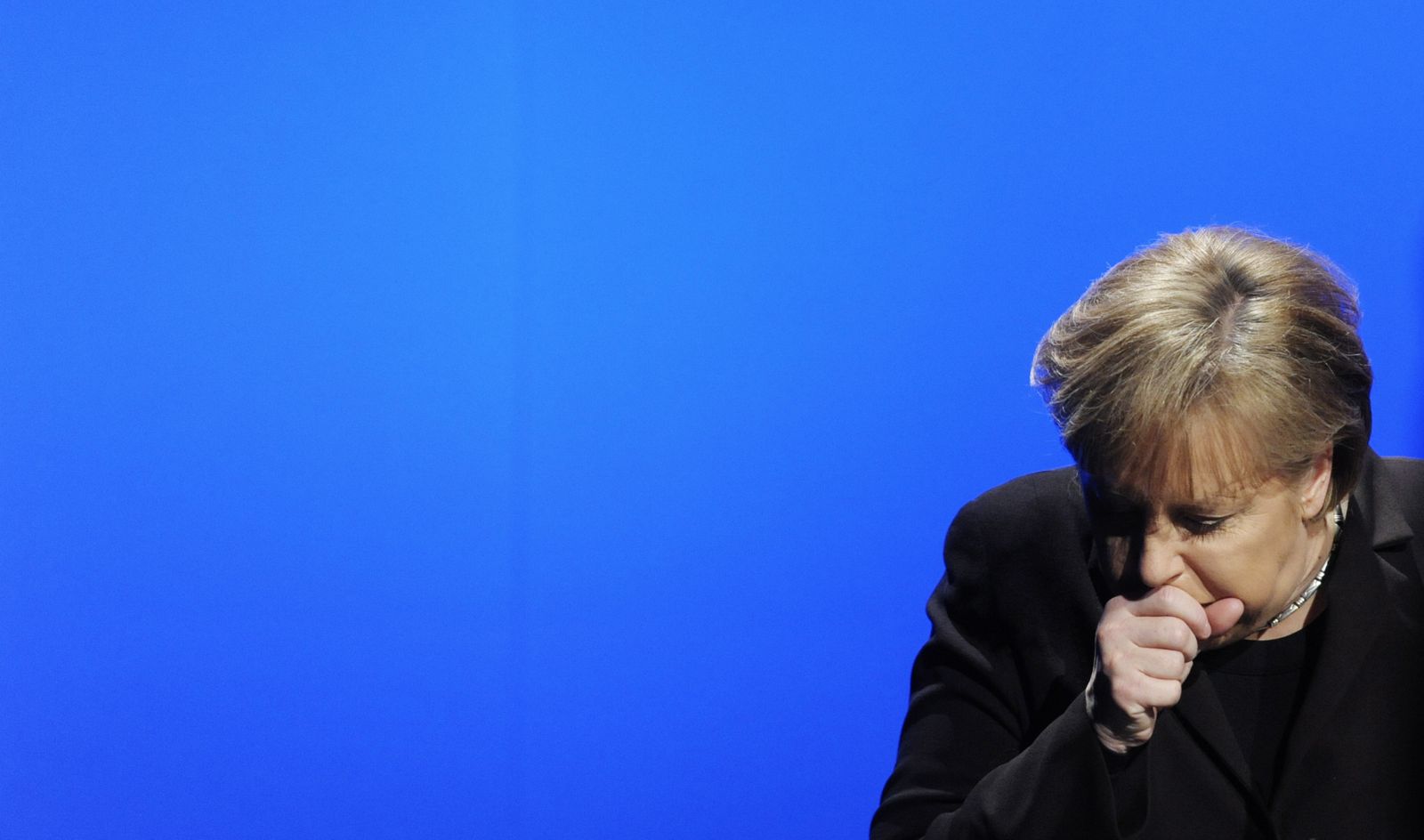 German Chancellor Angela Merkel: "A vote of no confidence on her European policies"