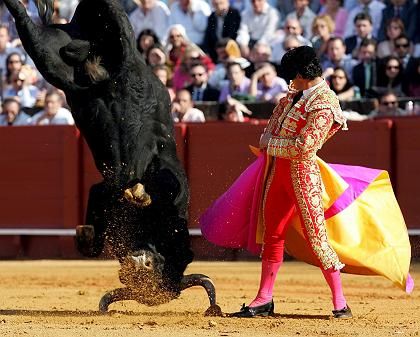 The Feria marks the start of the Andalusian bullfighting season.

Visitors to the Andalusian city of Seville during the Feria de Abril will be struck at first by the sight of young Spanish women clattering past on motorscooters in bright frilly flamenco dresses. It's like arriving in Germany and seeing everyone dressed in Dirndls.

In fact the Feria is a bit like the Spanish version of the Oktoberfest. The party is the essence of Andalusian Spain, just like the Munich festival celebrates Bavarian traditions.

At its peak during the final three days, up to a million visitors flock to the Feria each day.

The Feria began in 1847 as a livestock fair which turned into an annual event. The cattle, horse and farming tool traders and handlers at the fair partied the night away and the local Sevillians noticed they were having a good time and joined them. The festival grew from there, partly as a way to celebrate spring and the Resurrection after the Easter Holy Week.

The huge festival ground, a short bus ride from the city center, is dazzingly colorful and resembles a giant film stage. It is criss-crossed by rows of striped canvas pavilions, and paper lanterns throw shadows on the ground in the bright Andalusian sun.

Elegant horse-drawn carriages bearing Sevillanas in their flounced dresses rattle along the cobbled streets between the tents. Posses of men in traditional ranchers' outfits with round cowboy hats parade around the fairground, some with Sevillanas sitting side-saddle behind them. Children ride past on horses several sizes too big for them.

The pavilions are full of people dancing flamenco, sipping sherry, clapping and singing. The colors intensify with the setting sun, the dancing grows wilder and the whole city pours to the fiesta. Most of the pavilions -- there are over 1,000 of them -- are privately run by families, local companies, clubs and organizations. There are large public pavilions too selling sherry and dodgy-looking tapas.

The Feria isn't just about dancing and sherry drinking though. It also marks the start of the Andalusian bullfighting season. This part of the festival takes place in the center of town in the whitewashed 18th century Maestranza bullring. With its red wooden fencing and stone arches, it is regarded as one of the finest in the world.

A trumpet heralds the start of the fight and half a ton of bulging muscle gallops into the afternoon sun in a cloud of dust, snorting with fury and looking for trouble. The bulls are bred to be aggressive and have been known to charge at elephants, cars and even trains.

In his 1932 bullfighting homage "Death in the Afternoon," Ernest Hemingway describes the bullfight as an "artistic spectacle" and "modern sculpture."

It's undeniably aesthetic: The matador in his glittering "suit of lights" swirling his scarlet cloth to steer the bull into dangerously close passes (each one accompanied by a guttural "Olé" from the crowd), the deep shadows they both cast on the pristine ochre sand, the colorful darts rammed into the bull's neck by the quick-footed banderilleros to weaken him, even the dark blood glistening on his hide. It's like a tragic opera.

In Hemingway's day, the fight was far more gruesome. The horses of the Picadores, the mounted lancers who stabbed at the bull's neck, were unprotected and regularly disembowelled by the bull's horns. The horses would gallop around with their intestines dangling out. Today they have thick padding and tend to survive.

There are usually six bulls and three matadors in an afternoons fight and each slaying lasts only around 15 minutes -- any longer and the bull would learn the matador's tricks and become much harder to kill.

One poor creature tires quickly and sits down, like in the children's book "The Story of Ferdinand" about a strong bull who just wants to spend his life sitting under a tree and smelling flowers. Dragged into the bullring, Ferdinand refuses to charge and the confounded matadors send him back to his tree.

No happy ending for this bull, though. The exasperated matador goads him into a few lame charges and then plunges his sword between the shoulder blades. Blood spurts from his snout and he sways, then collapses and lies twitching in agony.

Death only comes after someone plunges a knife into his brain. As a team of horses drags the carcass out, the audience whistles at the bull's "cowardice", and the grand drama seems sordid and cruel.

During one of the fights, the matador is tossed into the air like a rag doll. Helpers run over to lure the animal away with their capes. The bullfighter is dazed but hasn't been gored. His face smeared with blood from the bull's hide, he makes a show of pushing his helpers away. Where's my sword? Let me at him! He gives the bull a slightly wider berth but kills him in the end.

The crowd, mainly local men and women dressed up for the Feria, gives the relieved matador a standing ovation and throws flowers and hats at his feet as he brandishes the severed ears of the bull. Once the drama is over, everyone heads to the Feria.

Recent polls show around 70 percent of Spaniards aren't interested in bullfighting, up from 40 percent in the 1970s. And state television has dropped live coverage of top bullfights, saying it was too violent for young viewers.

But the bullfight, or corrida, remains a firm part of Spanish society. Animal rights groups in Spain and around the world have attacked the practice as barbaric for decades but there is no nationwide movement to have it banned.

Bullfighting schools receive state subsidies and well over 20 million tickets to bullfights are sold each year. Fans tend to be middle-aged and upwards, it is far less popular among younger generations.

Some five matadors have been killed in the ring since the mid-1990s, and 10 in the last 50 years. But estimates for the number of deaths through the ages vary widely. Around 70 to 100 matadors are gored each year.

Some 40,000 bulls are killed each year in Spain's approximately 600 bullrings. Its not a fair fight: The death rate stands at one matador to several hundred thousand bulls.