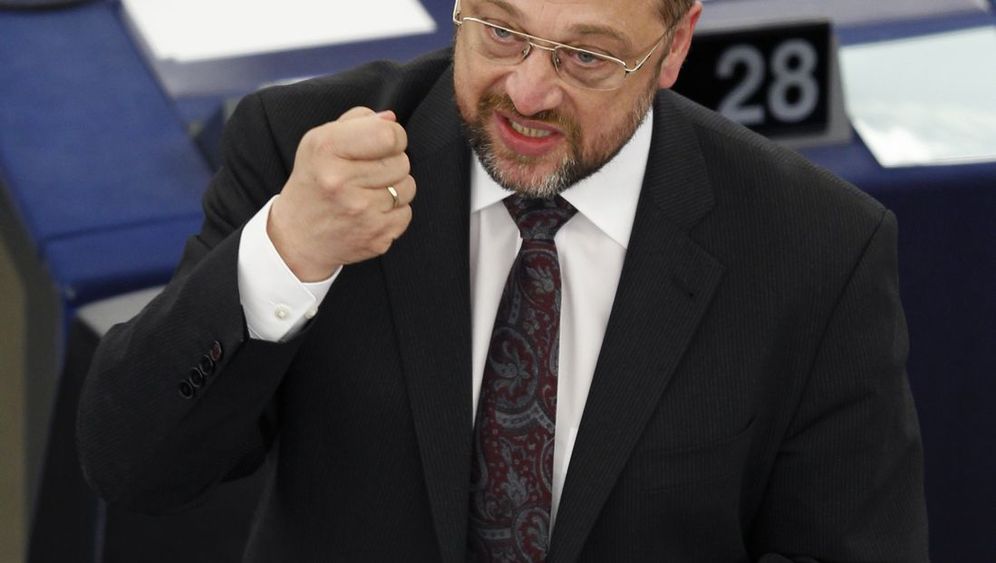 Two stars are blinking red on the indicator panel, signaling that the allotted speaking time has run out. Germany's Martin Schulz is already about two minutes over his limit, but he just keeps talking.

It's mid-December, and he's speaking about Europe's debt crisis and the future of the European Union. Schulz is taking advantage of his last appearance as the leader of the center-left Socialist group in the European Parliament to demonstrate to everyone gathered in the assembly hall in Strasbourg that few could come up with verbal zingers as strong as his. "The financial markets are driving a Ferrari, while the governments of Europe are puttering along behind on a bicycle," he says.

Schulz keeps on speaking, but he has nothing to fear as European Parliament President Jerzy Buzek, who is from Poland, lets him have his way. Without permission, Schulz has just about reached twice the limit of his speaking time when he finally starts wrapping it up. Then Buzek says into the microphone: "I have really been enormously patient."

On Tuesday, Jan. 17, the 56-year-old Schulz will replace Buzek as the president of the European Parliament. In the parliament, the usual procedure is that the two biggest parliamentary groups each get to choose the president for half of the five-year legislative period, with the office-holder being replaced after two-and-a-half years. Thus, Buzek, a member of the European People's Party (EPP), the alliance of Christian Democratic and conservative parties making up the largest faction in the parliament, will be succeeded by Schulz, the head of the Progressive Alliance of Socialists and Democrats (S&D), the second-largest faction.

Trading the position back and forth like this has always been easy for the two groups because the position of the parliament's president hasn't traditionally been one that promises much power. Indeed, it hasn't played any important role in the power struggles between various EU institutions. But Schulz has big plans for his presidency -- and for himself.

Unlike those who have previously held the office, Schulz says he has absolutely no intention of being "a mere figurehead." Instead, he plans to build the European Parliament up into a kind of counter-government to the European Council, which is comprised of the heads of state and government of the EU's 27 member states. Both the parliament and the Brussels-based Council are watching the attempt closely, although they are hoping for opposite outcomes. The latter are counting on Schulz to fail, while the former are hoping he succeeds.

Among the EU's three main institutions -- the European Council, the European Commission and the European Parliament -- the last is viewed as the weakest. Even the boost it was given by the Lisbon Treaty has done nothing to change its relative position. Its weakness already starts with the fact that it isn't marked by the classic division into governing and opposition factions. The parliament has 736 members, known as MEPs, from 27 countries, who are haphazardly divided according to interests, and their political alliances change depending on the issue at hand.

Now more than ever, in the midst of the greatest crisis the EU has ever faced, one would think there would be a need for a strong parliament to make sure the people of Europe are on board. But the fact is that most people are barely aware of the parliament. The most important decisions are made among the heads of state and government comprising the European Council -- provided, of course, they haven't already been decided upon behind the scenes by German Chancellor Angela Merkel and French President Nicolas Sarkozy.

Teaming Up Against Merkozy

"I'm a very direct and eloquent person," Schulz says. "I intend to confer this strength upon the European Parliament." And he already knows how he could do so. After wading through the Lisbon Treaty, Schulz has concluded that it allows the Parliament to play a bigger role than the one it has had so far. Although the European Commission is the only body with formal powers to propose new EU laws, there are no treaty provisions forbidding the parliament from launching its own political initiatives.

In the future, Schulz intends to put pressure on the Commission with this approach. He has already succeeded in doing so every once in a while as the head of the Socialist group, usually with the help of Guy Verhofstadt, the former Belgian prime minister and current leader of the ALDE liberal parliamentary group. Indeed, the two MEPs called for jointly issued euro bonds for so long that the Commission finally adopted the proposal as its own.

Schulz has already devised a schedule for the weeks following the election. He plans to make his first appearance with José Manuel Barroso, the Portuguese president of the European Commission. He won't be doing so because he holds Barroso in special regard. Instead, he will do so because he needs Barroso on his side so the two can jointly represent the established EU institutions against Merkel and Sarkozy, the top back-room dealers among Europe's leaders. "Every executive act of the member countries must be legitimized by the European Parliament," Schulz says. "I don't care if that's in the EU treaties or not."

Fighting for a Seat at the Table

Until now, Schulz has blazed his own trail in his efforts to bolster the influence of the MEPs. In late January, leaders of the 17 euro-zone countries will convene in Brussels in the hopes of enacting the "fiscal pact" pushed through by Berlin in December and thereby introducing a new type of fiscal policy coordination between euro-zone countries that would tighten EU control over national budgets and enact automatic sanctions against deficit offenders. The pact stands outside the framework of the Lisbon Treaty, and Schulz has publicly criticized Merkel for charting this special course, as is appropriate for someone in his position as a floor leader.

Of course, such criticism hasn't prevented him from being in regular telephone contact with Merkel. Among the things that he and other MEPs have accomplished is securing places at the table for three MEPs during the negotiations over the fiscal pact.

"In a pinch, one has to resort to extraordinary measures," Schulz says with a smile. Indeed, he is thrilled about his coup. When the heads of the 17 euro-zone countries meet for their upcoming "euro summit" -- for which there are no provisions in the EU treaties -- Schulz plans to take a seat at the conference table, even if he hasn't been invited. As he sees it, doing so can only be a win-win situation: Either the group centered around Merkel and Sarkozy will accept him, or they'll kick him out of the meeting -- thereby triggering a scandal right in front of the media's cameras.

Unlike Buzek, Schulz doesn't intend to settle for delivering a statesmanlike address in which he gives the blessing of the Parliament's president to the efforts of the heads of government and state. "Citizens are fed up with having everything decided behind closed doors," Schulz says. "We can only reverse this trend by fighting."

Indeed, beginning next week, fighting will be the new modus operandi between Brussels and Strasbourg -- fighting over power, attention and who has the last say. Things could go one of two ways. If Schulz fails with his model of the political president, he could make the Parliament into a laughingstock. But should he succeed with it, he could change the constellation of power in Brussels -- and in the process demonstrate that he is qualified for an even higher position.

For his predecessors as president of the Parliament, the post always marked the final stage of their political careers. Schulz, on the other hand, doesn't plan on retiring from politics for a long time to come. At 31, he became the youngest mayor in the western German state of North Rhine-Westphalia when he was elected in his hometown of Würselen, near Aachen. But since transitioning to the European Parliament in 1994, he has constantly felt unrecognized. In Schulz's view, both the public and his party, Germany's center-left Social Democratic Party (SPD), have underappreciated what he has accomplished in Brussels and Strasbourg.

But now that he's about to become what he calls "the highest-ranking Social Democrat at the helm of an international organization," the SPD leadership is giving the trained bookseller a more central position on the political stage. That became apparent in early December 2011, when the SPD held its most recent party congress in Berlin. At that time, hardly any of the major speakers forgot to mention Martin Schulz and his future role.

Likewise, Schulz's name comes up quite often whenever people in Berlin speculate about who in the SPD would hold a cabinet position if the party were to join the next government as part of a coalition. But, despite such speculation, Schulz doesn't think his days operating at the EU level are numbered.

Shortly before Christmas, Polish Prime Minister Donald Tusk delivered a speech lauding the EU before the European Parliament in Strasbourg. This put Schulz in a jam. Tusk is the co-founder and leader of Poland's center-right Civic Platform (PO) party, which puts him on the other side of the political divide from Schulz. He couldn't contradict the content of Tusk's speech, but he also didn't want to merely praise it. So, as a compromise, he said: "You're so good, you could easily be a social democrat. But, of course, one can correct historical errors."

Schulz's comment was more than just rhetorical parrying. The EPP is considering nominating Tusk to be the next president of the European Commission. Outside in the hallway, Schulz says: "I could do that job, too." 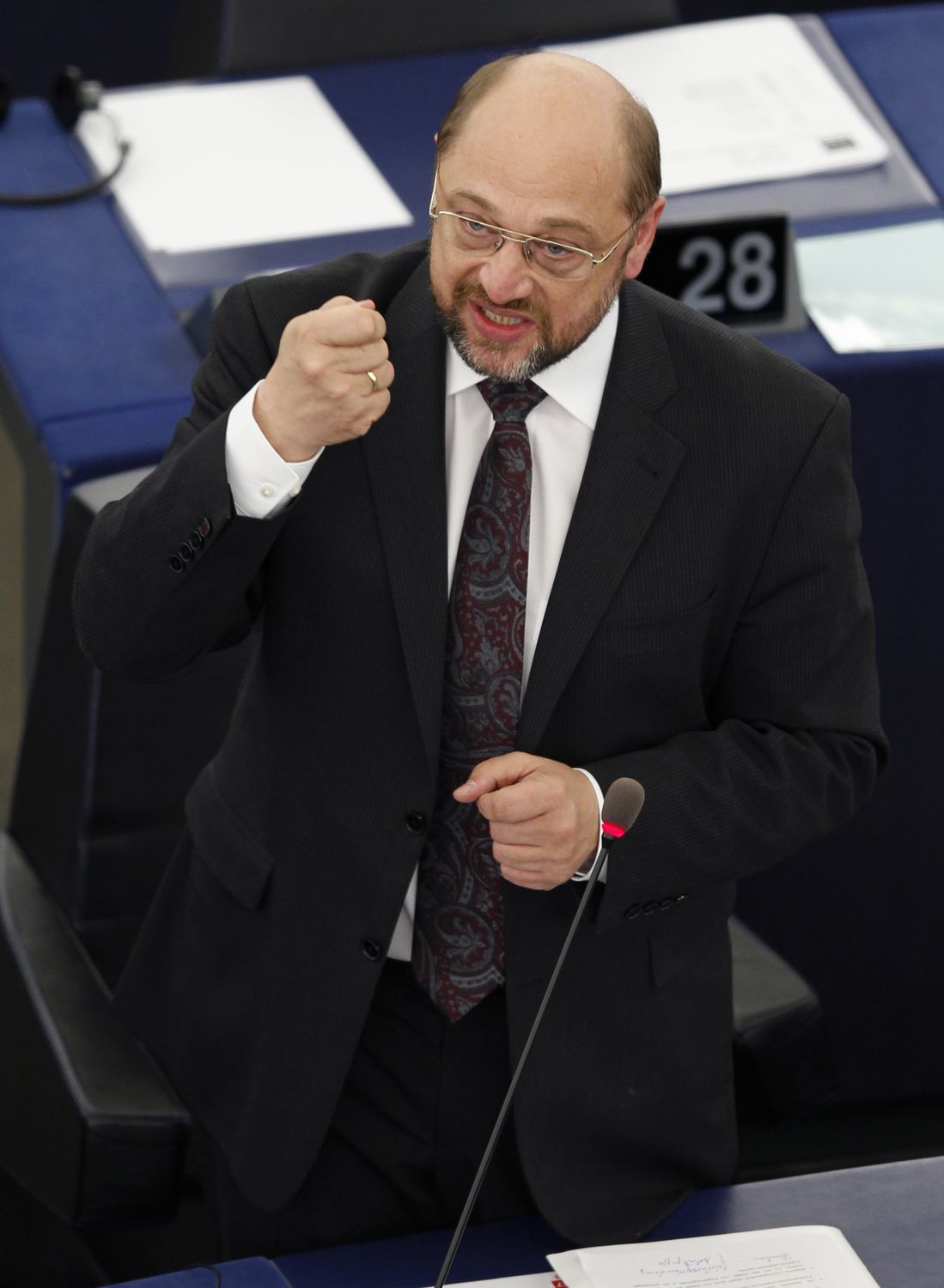 As the weakest of the EU's three major institutions, the European Parliament has often been viewed as little more than a rubber stamp for the others. But Martin Schulz, the German Social Democrat who will become its president next week, plans to change that -- and he's not afraid of ruffling feathers in the process.