When they first saw the USNS Trenton, waves were already crashing into their inflatable boat out on the open sea. The 117 people onboard had crammed into the 12-meter (40-foot) vessel to escape the torture in the Libyan camps and to continue their journey to Europe. Now, they ripped off their T-shirts and began waving them and crying for help. Among them was Josef, a Nigerian man whose name we changed for this story. On this Tuesday, June 12, 2018, he was hoping for a new life in Italy, both for himself and his pregnant girlfriend.

But the USNS Trenton, a 103-meter, high-speed, twin-hull catamaran outfitted with a helicopter and surveillance equipment, did not turn toward the distressed migrant ship, but away. And soon, the U.S. Navy vessel disappeared over the horizon.

Some of the refugees on board apparently began to scream while others simply fell silent. They began bailing water out of the dangerously overloaded boat with their bare hands, but the level continued to rise. Mothers who didn't know how to swim handed their babies off to those who could in preparation for the worst. There wasn't much wind, but one approaching wave apparently struck the inflatable raft in such a way that its wooden floor gave way. The mothers, fathers and children on board all plunged into the water.

Next to Josef, a man was holding his wife above the water as he swam. Others grasped onto her in their desperation and pulled her under water. The man grabbed her again and yanked her back up to the surface. Again, people latched onto her -- and this time, she didn't resurface. Josef hung onto what was left of the inflatable raft, but he had lost sight of his girlfriend.

About half an hour later, a helicopter appeared and then three motorboats sent from the Trenton showed up. They pulled 41 people out of the water. All the others had drowned, including Josef's girlfriend and their unborn child. A total of 76 people lost their lives that day.

That incident isn't the only case in which there are suspicions that people in distress were not immediately given the help they needed. Civilian rescuers say that such occurrences have become more frequent since Italy and Malta closed their ports in June 2018 to ships with survivors on board. Statistics indicate that the relative number of migrants who die while trying to cross the Mediterranean is higher this year than it has ever been.

Why the Trenton did not provide assistance earlier is unclear. It is often difficult for radar equipment to pick up inflatable boats and it could be that the lookout didn't initially see the migrants. Furthermore, the migrant boat was still travelling under its own power when the U.S. Navy ship passed by, meaning it wasn't yet in distress from a legal point of view.

But it does look as though the crew of the Trenton isn't of a mind to provide help unless obligated under maritime law. Case in point: Two days before Josef's girlfriend drowned, a different inflatable raft had to be saved. When the Greek oil tanker Leon Hermes radioed the Trenton to request assistance, the American ship responded: "We have other taskings."

The U.S. Navy provided this statement on the deaths: "At approximately 1010 GMC on 12 June 2018, USNS Trenton's watch officer visual observed a capsized raft and personnel floating in the ocean. Given the sea state at the time, this was the first observation of the raft made by personnel of USNS Trenton."

One of the survivors says: "If that boat saw and rescued us before, 76 people would not have died."

Sicilian investigators are looking into the matter. A formal inquiry into whether the Navy failed to render assistance in an emergency had not yet been initiated.

Jana Ciernioch, spokeswoman for the aid organization SOS Mediterranée, was on watch duty in August on board the rescue vessel Aquarius. The crew had just saved 25 people and Ciernioch began chatting with two men from Cameroon, who told her about their voyage. And they told her something that has been bothering Ciernioch ever since.

Packed together in a small, wooden boat, they were put out to sea by Libyan migrant traffickers, the two men said, and the vessel charted a northerly course. At some point, they say, they caught sight of a freighter, but it sailed on past. Later, another one came close, and then others after that. But none of the crews stopped to help, the men said.

Refugees on the Mediterranean in October

An oil platform then came into view and they steered toward it and yelled for help. But the workers on the platform, they said, merely pulled out their smartphones and began filming the migrant boat and shouting insults. Ultimately, they ran out of fuel and their small wooden boat drifted away with the current.

The Aquarius crew discovered the boat in distress after it had been at sea for 35 hours. Many of them were dehydrated and sunburned, but all were still alive. Member of Doctors Without Borders later conducted systematic interviews with the survivors and concluded that five ships had refused to provide assistance.

"The United Nations Convention on the Law of the Sea from 1982 mandates that captains on the high seas must provide assistance to all persons in distress at sea," says Kiel-based maritime law expert Uwe Jenisch. But the question has always been: At what point is someone in distress? Is it enough to be merely sitting in a rubber raft at sea, even if the motor is still running? Or must the raft be sinking?

Ciernioch ponders this question a lot. She believes trade ships don't provide assistance because they are wary of spending days looking for a port of call now that Europe has closed its ports to survivors.

The Dublin Regulation requires people seeking asylum from a European Union member state to file their application in the EU country where they first set foot. That is why Italy was long responsible for the vast majority of migrants who crossed the Mediterranean to Europe. Between 2014 and 2017, an average of 156,936 made the crossing each year and civilian rescue ships frequently unloaded the hapless migrants they had saved at Italian ports -- until June 9, 2018. On that day, the Aquarius set course for Italy with 629 survivors on board, but Italian Interior Minister Matteo Salvini of the right-wing radical party Lega, refused to grant the ship permission to land.

The Trenton crew was likewise aware that it wouldn't be allowed to dock at an Italian port and it ultimately took five days before the ship could transfer the survivors to the Italian Coast Guard. At roughly the same time, the crew of the Danish container ship Alexander Maersk saved more than 100 people from the Mediterranean and had to wait several days as well. Ruben Neugebauer from the organization Sea-Watch says that since then, freighters have regularly been sailing right on past boats in distress without stopping to help.

Neugebauer is director of operations on board a civilian rescue airplane. On days when weather conditions allow for inflatable rafts to put to sea from the Libyan coast, he circles above the Mediterranean at an altitude of 500 meters.

If he sees an inflatable raft in distress, he informs the Maritime Rescue Coordination Center in Rome and radios the raft's coordinates to all ships in the area so they can help. "In most cases, they react," says Neugebauer. But, he says, there is an increasing number of ships that simply continue on their original courses and try to dodge their maritime duties.

In such instances, Neugebauer photographs the scene, circles over the ship and lets the captain know over the radio that he has secured evidence of failure to render assistance. At that point, he says, most captains react.

But Neugebauer and his colleagues have been prevented from doing their jobs since May 24, 2018. On that day, the flight crew discovered an inflatable raft in distress and noticed the San Giusto, formerly the flagship of the EU mission Sophia, was nearby. The operations director radioed the warship, requesting they assist the raft, but received no response. Only after repeated requests did the ship dispatch two dinghies to save the migrants.

The next day, there was another emergency. Again, Neugebauer and his crew requested help from a Navy ship, he says. But the next time they sought permission to take off from Malta, Neugebauer says, they were denied without any explanation. And permission hasn't been granted since.

Neugebauer says, however, that the blame doesn't lie with the shipping companies. They face contractual penalties if they fail to deliver their goods on time due to a rescue at sea. "The dying will continue for as long as Italy keeps its ports closed," he says.

And things will only change, he continues, once EU member states reach agreement on the fair distribution of migrants across the bloc. Until that time, Neugebauer says, "witnesses in the Mediterranean are unwanted." 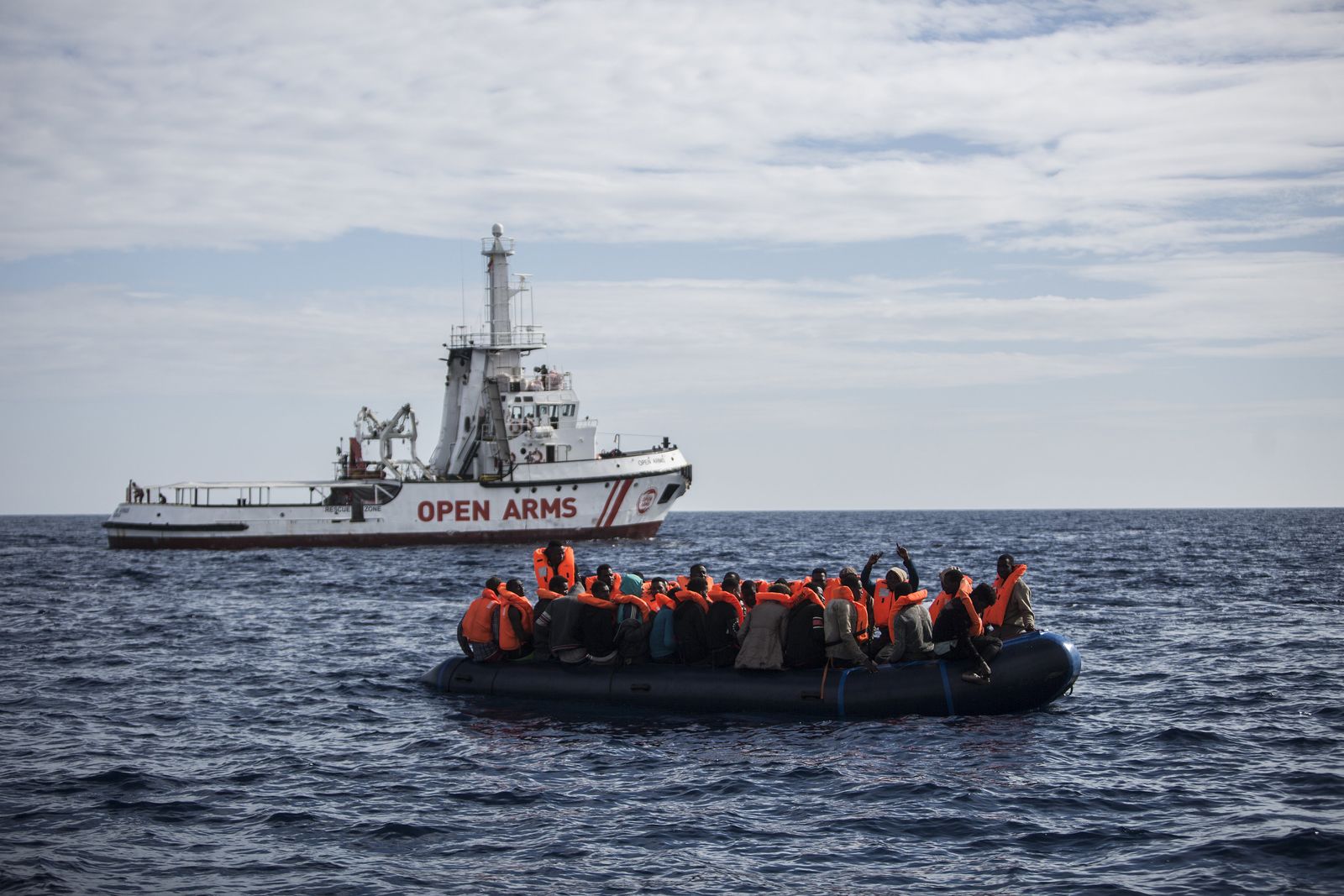 Refugees on the Mediterranean in October