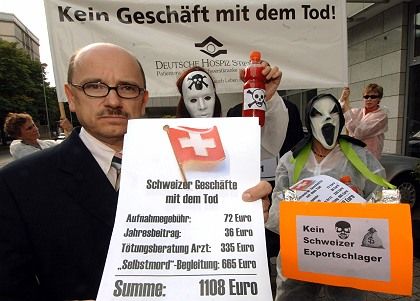 For nine years a residential neighborhood in Zurich has had to deal with a constant flow of police cars and ambulance calling to one particular house. Three or four times a week people arrive at the apartment building on Gertrudstrasse -- waiting to die.

But now the controversial assisted suicide organization Dignitas is being evicted from its premises. The group had occupied two apartments in the modern housing block but now the landlord is cancelling the lease -- too many residents in the building had complained. The group now has until September to find a new abode.

Residents and neighbors had been put off by the fact that death comes knocking so frequently at Gertrudstrasse 84. Since 1998 700 people have made their last journey to the apartments on the first and fourth floors of the modest block. More than half of those using the Dignitas service to end their lives are from Germany, where the organization now has an office, and the second biggest group is from Britain.

Gloria Sonny started the campaign to banish Dignitas from her building. She told Germany's Süddeutsche Zeitung that Gertrudstrasse 84 had become a "house of death," and that was why she and a friend had decided to gather signatures in the house and the surrounding area. The 55-year-old insisted that she wasnt against assisted suicide but said that "people live here  it's the wrong place."

The local resident's association, headed by Laurenz Styger, then led the push for the practice to end and finally the landlady, a cousin of Ludwig Minelli, who heads Dignitas, relented and gave the group its marching orders.

Not all residents are against the presence of Dignitas. "I knew when I moved in that they were here," Karin Bollinger told the Süddeutsche Zeitung. "I dont have a problem with it." Bollinger also criticized the fact that society tries to suppress death, saying that the service Dignitas provides is "a good thing."

Switzerland has liberal laws on assisted suicide in comparison with many other countries, although the practice is also legal in Belgium, the Netherlands and Oregan in the United States. In Switzerland, all that is needed is for a doctor to confirm that the person in question wishes to die and then write a prescription for a lethal dose of the barbiturate sodium pentobarbital. People wishing to die are accompanied by a "suicide assistant," but patients administer the dose themselves. Critics argue the Dignitas makes it all too easy.

There is growing concern in Switzerland about the phenomenon of suicide tourism, with the Justice Minister Christoph Blocher warning it could damage the country's reputation.

This June the Swiss senate called on the government to draft a law aimed at improving controls of organizations offering assisted suicide and the National Commission on Biomedic Ethics, a government advisory panel, has also recommended increased state supervision of organizations such as Dignitas.

Swiss Senator Hansruedi Stadler, a Christian Democrat who is behind the moves to change the law, told Germany's Ärtze Zeitung: "They arrive in Switzerland on the day of their death, have some kind of conversation with a representative of the assisted suicide organization and the doctor, who writes a prescription and a few hours later they get the lethal dose. The clarification of whether the person desires death takes time and can't be rushed through at top speed."