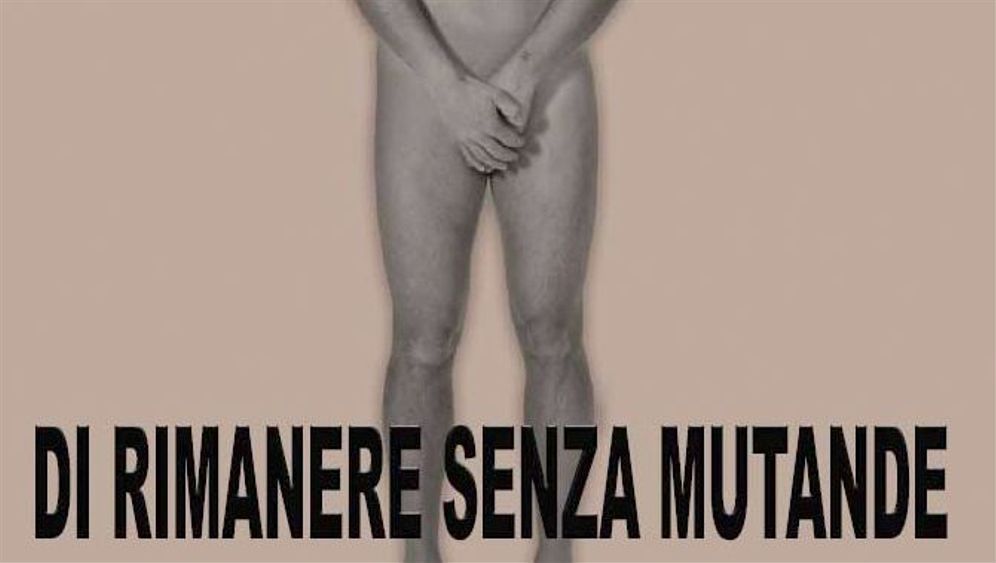 Enrico Frare has been working hard for 12 hours, and now it's time to go home. "The last one turns off the lights," he says, "and I'm always the last one." It's the middle of the night in Veneto, the model northern Italian province with its creative small- and mid-sized businesses. He talks on his car phone in the parking lot of his company, fielding calls from Italian expatriates from Japan and Argentina. They are calling to congratulate him.

And it's not Frare's birthday that they're calling about, it's his birthday suit: All of Italy now knows what he looks like naked. Frare, 36, is a textile manufacturer from Treviso, and has been the head of a winter sportswear company since January. Last week he took out a full-page ad in Italy's largest newspaper, Corriere della Sera, in which he posed naked. The ominous caption next to the photo read: "Every day in Italy a businessman risks losing his underpants."

Why did he do it?

For months, Frare says, he hasn't managed to get start-up capital from Italian banks. He's short €700,000 ($960,000). He has money to keep production going and secure the jobs of his 18 employees until the end of the year. He says that he wants to grow in Italy, "the country that I love, and the country that allowed me to become big and bold." Frare also wants to stay in the country, which means not manufacturing abroad and not moving his capital across the border, as his friends are doing. What does he expect from the government in Rome? "I want it to wake up and do something, and to finally bring about reforms, even in the face of resistance."

Growing, trusting and staying are three things that have become almost impossible in Italy these days, as one emergency summit follows another, and the sell-off of Italian government bonds generates a sense of alarm. The leader of the Democratic Party says the country is in worse shape than ever since the end of World War II.

"The crisis and government question are two problems that have to be resolved together," says Pier Ferdinando Casini, chairman of the Unione di Centro (Union of the Center, or UdC) Party, and many people in Rome seem to agree: Even members of Silvio Berlusconi's own party are now distancing themselves from the prime minister. Last Wednesday, six of them wrote him a letter and demanded a new government. Two other party members defected for the UdC.

On Monday, Berlusconi denied rumorsof his imminent resignation. But prominent businessmen have also started to leave his side. Diego Della Valle, owner of the legendary leather goods company Tod's, also ran an ad. But instead of a photo, the ad featured the words: "Politicians, basta! Your time is up. We won't tolerate your spectacles anymore. We demand competent politicians who think about the country, and not just themselves."

Ferrari Chairman Luca di Montezemolo was even more direct, demanding Berlusconi's resignation. "We need to open a new page," he said. Opinion polls show that about 60 percent of Italians would support Montezemolo as a politician.

Montezemolo has a restructuring plan that he believes will protect Italy from bankruptcy. He is calling for a nonpartisan "government for the public good," which would tax wealthy Italians and radically cut government costs by substantially reducing the roughly 1,000 senators and members of parliament, as well as the number of provinces.

"If Berlusconi had just remained a businessman, we wouldn't have as many problems," says Enrico Frare.

More and more family-owned businesses, the real engine of the Italian economy, are moving their capital abroad, which has led to tighter controls at the border with Switzerland. Italians are showing up in Tirol and Carinthia, the two Austrian provinces bordering northern Italy, to investigate the requirements for opening private bank accounts. A group of businessmen from the Friuli region traveled to Slovenia to invest their money in banks there instead of Italian government bonds.

The investment climate has deteriorated dramatically. Italy lost its allure for foreign investors some time ago. According to a survey of German entrepreneurs in Italy, the country is far less attractive for foreign investment than France, Spain and Portugal, because of such factors as high taxes, high ancillary wage costs, unreliable payment of debt and political instability.

The results of the World Economic Forum's most recent Global Competitiveness Report are also devastating for Italy. The country ranked 123rd in labor market efficiency -- just below Mozambique. The reasons for its poor showing include rigid protections against termination, the absurdly lengthy duration of legal proceedings and the increasingly restrictive commercial lending practices of Italian banks, a problem which has also beset textile executive Frare.

At the G-20 summit in Cannes, Berlusconi faced demands for solutions. Pressure mounts daily to implement an austerity plan that has been announced several times. Meanwhile the markups on Italian government bonds continue to hit new records. On a single day -- the Friday before last -- the interest on those bonds amounted to about €479 million. Although Berlusconi hurried to deliver his report, wearing an expensive flannel coat as he walked up the red carpet, he arrived empty-handed.

He did not come with urgent decrees, as expected, but merely with announcements, including a so-called expansion of the stability law and a sort of miniature growth plan, but no drastic measures. They were thrown out by the president, who insisted that such extensive proposals could not be implemented through an emergency order.

Either way, Berlusconi's measures would not be enough to placate the markets. In fact, it is questionable whether the measures would make it through the Italian parliament. It seems clear that he wants to push through his anti-crisis plan with a 52nd confidence vote, either this week or next. He won the last confidence vote only three weeks ago -- by one vote. Now the outlook is even worse, and it seems likely that Berlusconi, an escape artist who has emerged strengthened from past crises, will not survive this one. As of last week, the country has been under special observation by the International Monetary Fund in Washington.

And while Berlusconi vied for confidence at various EU summits, the Italian president was busy in Rome, assessing politicians for their post-Berlusconi potential, knowing that he has to be prepared for the imminent end of the current administration.

Giorgio Napolitano, 86, had summoned them one after another, representatives of the opposition and the shaky governing majority. His question was: Who can bring the reforms that are so urgently needed? It might be a transitional government headed, for example, by former EU Competition Commissioner Mario Monti. German Chancellor Angela Merkel has reportedly discussed the question of a possible successor with the president, who may be the only politician in Italy at the moment keeping a cool head.


So far, the response has consistently sounded like the usual Italian cacophony, which is detrimental in times of crisis, and not just for Italy. There are rumors of efforts to stab Berlusconi in the back by renegades from his own party, and of the stubborn Northern League leader Umberto Bossi, who is giving the finger to pension reform. And then there is the toothless opposition, which says: We're ready, but only if Berlusconi resigns.

And then there is the sharp dispute with Finance Minister Giulio Tremonti, who is berated as a traitor because he angrily walked out of a crisis meeting with Berlusconi, allegedly saying: It isn't Italy's economy that is the problem, "it's you." Only a day later, Tremonti and Berlusconi, in a publicity move, were photographed sitting at a conference table together and poring over documents.

Italy is currently showing its ugliest side: a crippled, ridiculous country stuck somewhere between Greek tragedy and opera buffa. According to Corriere della Sera, Berlusconi will not be brought down in the next few days, and yet his end will come -- if not tomorrow, then in a few weeks. A functional government hasn't existed for some time, and yet has managed to retain power, partly because the premier has latched onto the office like a drowning man.

This is understandable. When Berlusconi is no longer prime minister, he will lose the privileges that protect him from the courts. The four cases currently pending against him would suddenly become dangerous. In the Rubygate trial, Berlusconi could face between three and 12 years in prison. The other three cases, in which he is accused of bribery, tax evasion and accounting fraud, also threaten the existence of his corporate empire.

At least there was one bit of good news at the end of a turbulent week: Berlusconi's long-planned CD of love songs will be available just in time for the Christmas season. It will be called "Il vero amore," or "True Love." 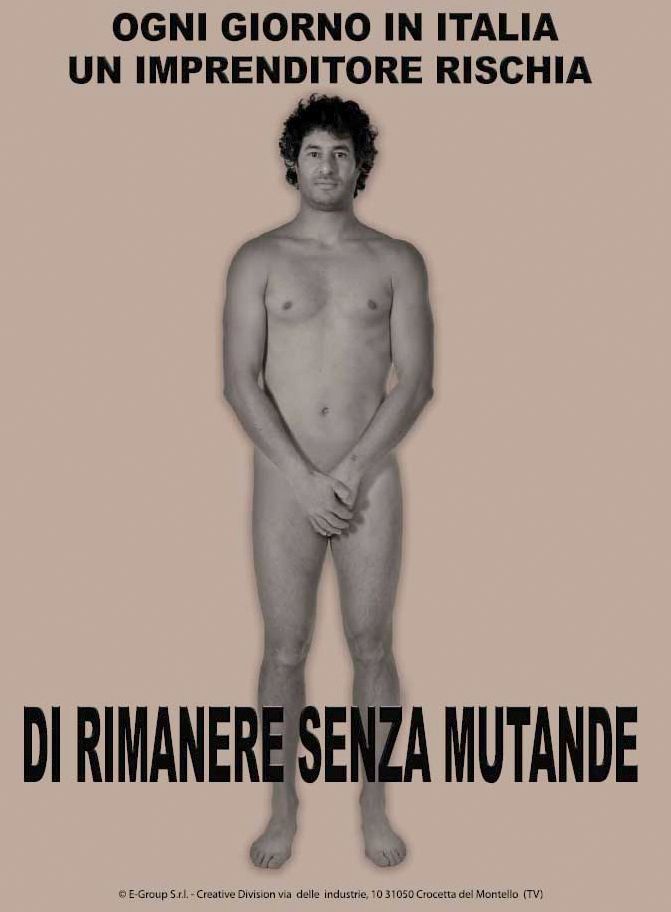 Enrico Frare, 36, runs a winter sportswear company. Last week he posed naked for an ad in Italy's largest newspaper, Corriere della Sera. "Every day in Italy a businessman risks losing his underpants," read the caption -- a protest against Italian leadership during the euro crisis.