Now, just like Norway's trial last year, it's Germany's turn to address far-right terrorism. It's a trial during which not just the defendants, but also the country's officials and even somehow its citizens are facing judgment. The parallels between the two trials -- that of Anders Behring Breivik in Oslo, and now Beate Zschäpe in Munich -- are striking. They are about murder, right-wing extremism and defendants who are vainly pleased with their roles as the accused.

The world is watching the trial in Germany against Zschäpe, the only surviving member of the three-member National Socialist Underground (NSU), who is accused of being an accomplice in the murders of 10 people, mostly of foreign origin. But most probably aren't following it as closely as many watched Breivik's trial, which I covered a year ago. Still, the similarities of the charges against Breivik and Zschäpe are so obvious that they would have been recognizable even if the mass-murderer from Utøya's gushing letter to her had never come to light.

Both cases make it clear that no matter how civilized and democratic a society may be, it is not immune to the ideological decay and violence that can spread within. No one within Germany's establishment would think to express any measure of schadenfreude over the events that took place in Norway, a country that, despite its reputation for being demonstratively harmonious and consensus-oriented, was fertile ground for the maturation of a mass murderer who killed 77 people in premeditated attacks that devastated Norway in July 2011. No one would blame Norwegian society for producing such terror.

Not even the mistakes of security forces in preventing or mitigating Breivik's crimes have come under fire in Germany. Because how embarrassing is it by comparison when a detective who was investigating the NSU's crimes now says that he simply didn't think to suspect two blond neo-Nazis on bikes, even when they had been seen at the scene of a crime? How shameful is that?

A bitter realization binds Norway and Germany: Both nations failed in fighting the forces of evil that threaten from the far-right. Breivik's attacks on Oslo and the island of Utøya happened two years ago today, and the trial wrapped up about a year ago. I was on my way home from a fishing trip when I got a call from the newsroom about 10 minutes after he detonated a car bomb in Oslo's government quarter. "You must've heard that there was an explosion in Oslo," my colleague said as I loaded freshly caught mackerel into the trunk of my car. No, I had not.

Since this brutal expulsion from the paradise that Norway had been to me, I have covered the events as a SPIEGEL correspondent. I saw the tears of the bereaved, the body bags as they piled on the MS Thorbjørn, and I looked into the eyes of the husband of Breivik's first victim Monica Bøsei when they were no longer wet, but just red, desperate and questioning. I held a rose on the square in front Oslo's city hall, and I sat on the chair in the Grønlokka police station of where Breivik was interrogated for hours.

I spoke with the forensic psychiatrist Randi Rosenqvist, who pushed for further psychiatric evaluation of the defendant, and then looked on for hours while the accused turned a ballpoint pen between his thumb and forefinger in court. But I do not deserve pity for any of this. That belongs to the survivors, traumatized rescuers and everyone else whose life has been forever changed by Breivik.

During his trial I had a lot of time to wonder what kind of person he is -- sick, or healthy from at least a forensic perspective? I believe it is the latter, because, before a court, other standards for the measurement of mental health and evil intentions apply than at the pub or in the tabloid press.

With relief, I watched his trial end. The judge did not allow herself to be moved by the perceived opinion of the public, and sentenced Breivik as an individual who was fully responsible for his crimes. The verdict, which deemed him sane and convicted him to the maximum sentence of 21 years in prison, is one that will help the wounded public begin to heal. It reflects the victims' desire for retribution, but it also preserves the dignity of law.

Germany Still Has Work to Do

I'm now leaving Norway and moving to Berlin, where I will cover German politics from SPIEGEL's office in the capital. I'm returning to my home, a country still working to restore trust in its institutions after the crimes of the NSU came to light. This is particularly the case for the Turkish-German families whose loved ones fell victim to the NSU, and were initially treated like suspects in the murders.

But the start of the trial in Munich this May immediately brought disillusionment. Instead of the same kind of professional approach to the media as I saw in Oslo, the Bavarian court bungled the accreditation process, initially favoring domestic press over international sources. Meanwhile, the trial will continue for a long while, but without the main perpetrators, who avoided their responsibility with suicide before they were captured after a botched bank robbery.

When I see Zschäpe, I think of Breivik. That cannot be separated in my mind. What kind of perverse personal transformation must one undergo to go from being someone who has never been harmed by foreigners, to someone who wants drive them away and wipe them out? There is no good answer for this question. There is only the hope that the perpetrators will receive just punishment -- whether it's in Munich, Oslo or anywhere else in the world.

This piece originally appeared as a guest contribution on the website of Norwegian broadcaster NRK. 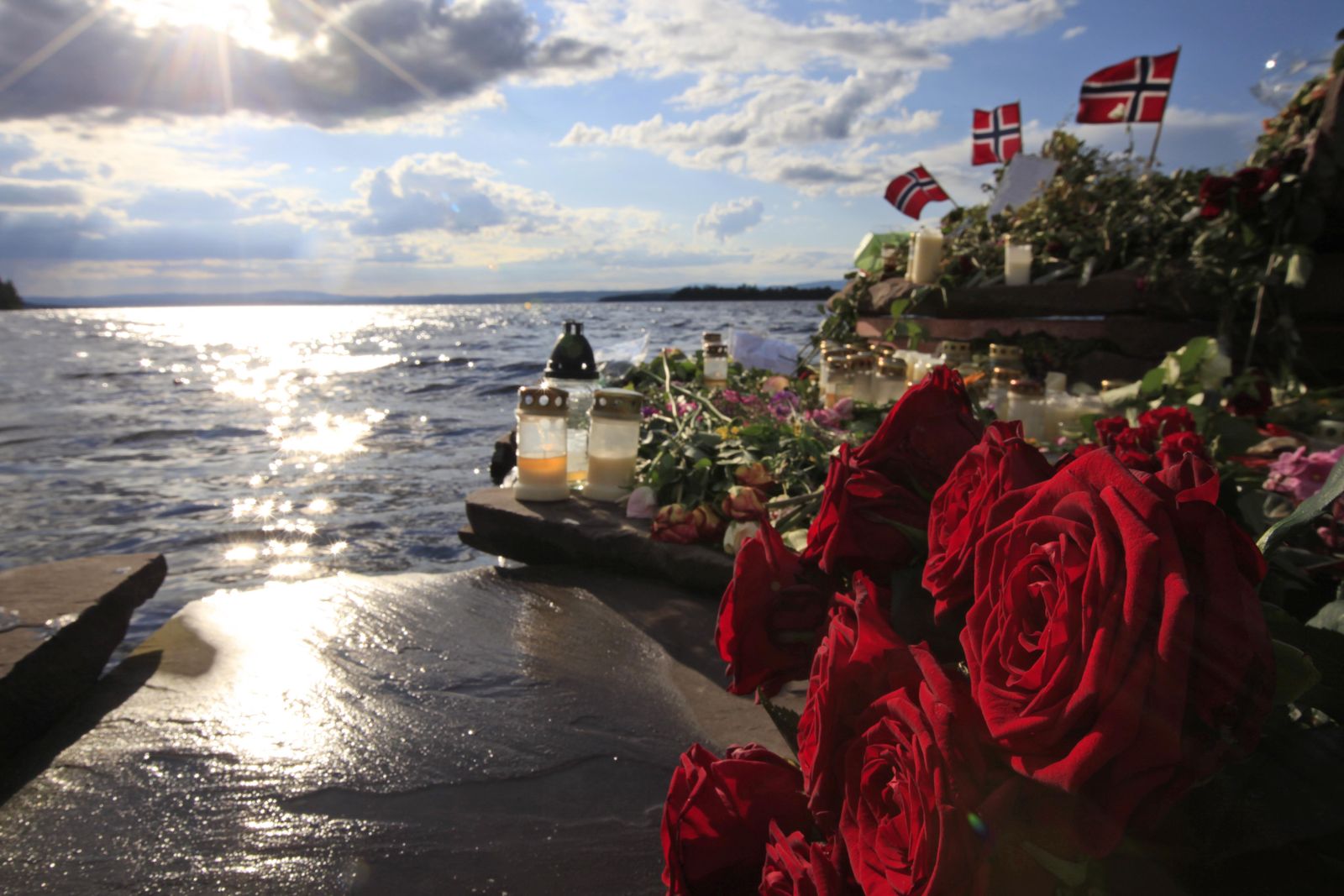 A file photo shows flowers and tributes for the victims of Anders Behring Breivik near the island where he gunned them down in 2011.