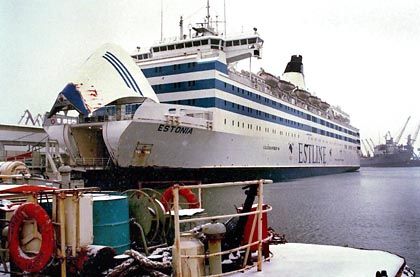 It was 1:02 a.m. when his alarm clock slipped off the night table. A survivor of the Estonia disaster remembers the exact time because he had to replace the batteries, which fell out of the alarm clock when it hit the floor.

1:00 a.m. ship time -- shortly before the ferry suddenly heaved to one side -- is the time that a computer simulation of the disaster begins. A group of Hamburg researchers are hoping to unravel the last secrets of the terrible night of Sept. 28, 1994. It was the night when the Estonia capsized in rough seas while en route from the Estonian capital of Tallinn to Stockholm. Only 137 of the 989 passengers and crew on board survived the disaster.

To this day, some suspect that criminal activity was behind one of the worst disasters in European seafaring history. Theories that the ferry was in fact the target of an attack have also been fueled by questions about the credibility of the official investigation report, which Estonian, Finnish and Swedish authorities published in 1997.

With these misgivings in mind, Swedish authorities hired experts at Hamburg Ship Model Basin (HSVA), a hydrodynamics research facility, and at the Hamburg University of Technology (TU) to conduct a study on the sinking of the Estonia. The group, headed by university researcher Stefan Krüger and Petri Valanto of HSVA, plans to submit its report in late March. The information they have uncovered so far suggests that their results will not only shed light on the causes of the disaster, but will also have consequences for passenger shipping. One certain conclusion is that evacuation procedures for combined car and passenger ferries like the Estonia are inadequate.

The research team's calculations, which it obtained using ROLLS, the world's foremost simulation program for shipping disasters, already contradict speculation that the Baltic Sea disaster may have been caused by explosives. Instead, they suggest that speed, wave conditions and a turning maneuver sealed the fate of the Estonia.

The researchers are also rewriting the timeline of the disaster. According to the 1997 official investigation report, the drama began at 1:14 a.m. and the ferry capsized in heavy seas about 25 minutes later. According to the computer simulation, however, the ferry's death throes lasted a full 14 minutes longer, because the final hour of the Estonia began at precisely 1:00 a.m., not 1:14.

On the night of the disaster the ship's Estonian crew had whipped the ferry at full speed through four-meter (13-foot) waves to make up for delays. The resulting stress caused the bow visor to break off from the hull, and the vehicle ramp, which formed a second barrier against the waves when tilted up behind the bow visor, to open. The vehicle deck, normally about three meters (10 feet) above the water line, was suddenly flooded with water.

Both the media and experts alike long viewed the loss of the bow visor as a sign of foul play. According to their theories, only an explosive device could have severed the visor from the hull, because the visor's massive locking mechanism could not have been broken off by other means.

Some attributed the supposed explosion to rumors that a truck carrying nuclear material was on board, or that the vessel had been carrying secret weapons shipments for Swedish intelligence. According to these theories, the Estonia was deliberately sunk to avoid detection of the illicit cargo by Swedish customs officials.

A private company even recovered metal samples from the bottom of the Baltic Sea in August 2000 in an effort to prove this theory. Three institutions analyzed the samples for evidence of a possible explosion. But in the end, an analysis commissioned by SPIEGEL in 2001 refuted the explosives theory.

Simulation of a Terrifying Night

Any other result would have surprised TU researcher Krüger. According to his analysis, the forces acting on the Estonia as it traveled at top speed through heavy seas were "verifiably greater" than the forces the bow visor had in fact been designed to withstand.

The authorities used the testimony of surviving crew members, radar data, pieces of wreckage and the location of the wreck to determine the course the Estonia traveled during its final nautical miles. According to their data, the Estonia was traveling westward toward Stockholm at 281 degrees, with the wind and waves whipping against the ship from portside at about 45 degrees.

The Hamburg group simulated three possible scenarios for what happened next. According to model "0a" of the disaster, the visor was still attached to the hull, but both it and the vehicle ramp opened by a gap of 1 meter (3 feet). In version "0b" the visor was torn from the hull but the ramp, opened by a gap of 1 meter, still offered some protection against the waves. Finally, in scenario "1" the bow visor and the ramp both failed to act as a barrier against the sea.

According to the researchers, version "0a" could only have applied to the "very initial phase of the disaster." In their estimation, the volume of water flooding the ferry, according to this scenario, would not have been sufficient to cause it to capsize.

But even if, as in scenario "0b," the bow visor was torn off, the volume of water entering the vehicle deck through the slightly opened ramp would still have been too small to explain the dynamics of the disaster. In this case, the ship would have listed by 14 or 15 degrees after 10 minutes, and the crew would have "had sufficient time to take action against the water ingress."

For these reasons, scenario 1 seems the most plausible, at least according to the simulations performed so far. When the bow visor broke off, the crew under the Estonia's captain, Arvo Andresson, could only have surmised the true extent of damage to the ferry. They would have been unable to see that the visor was missing, because it was not visible from the bridge, which was set back from the bow and towered five decks above it. Nevertheless, both the investigators of the accident and the Hamburg researchers are fairly certain that the nautical officers, none of whom survived, must have known what had happened.

The Estonia's last course shows that it turned to portside. The ferry also slowed down within the space of a few minutes, from 14 knots (17 mph) at the time the visor broke to 9 knots (10 mph).

Valanto believes that the turn to portside was an attempt to use wind and wave action to stabilize the ship, a maneuver that makes sense from a seaman's perspective. On the one hand, the natural forces would be expected to press against the right side of the ship, helping to bring it upright again. Besides, the open bow, facing the sea like an open wound, would be turned to face away from incoming waves.

But the maneuver did not save the ship as expected. The computer simulation reveals why physics prevailed over the crew's efforts, ultimately leading to such a devastating outcome.

In the first phase of the accident, after the bow visor had broken off and, as the Hamburg researchers assume, the ramp had also lost its protective function, the Estonia took on a lot of water. According to Valanto, the ship's "dynamic behavior" only reinforced this effect. The ferry's high speed caused the bow to sink deeper into the water, while at the same time allowing a higher bow wave to develop.

When the Estonia turned to portside, the centrifugal force produced by the ship's curving motion pushed the water in the opposite direction. As a result, the ship's list, instead of being reduced by the emergency maneuver, was in fact increased by the force that now pushed all the seawater on the deck against the right side of the vessel.

At this point, as the behavior of the simulation's virtual Estonia shows, water rushed into the passenger deck below the vehicle deck. According to the simulation, the Estonia was listing at 50 degrees at 1:20 a.m. and tilted onto its side at 1:32 a.m. Meanwhile, the sea was already tearing new holes into the hull.

Large panes of glass lined the decks along the rear half of the ferry, while the windows in the outer cabins toward the bow were smaller. According to the simulation, the safety glass in the large windows was the first to fail.

In the simulation, the Estonia's kiss of death came when water flooded into the openings formed by the roughly 90 large windows, upending the keel and sinking the ship.

The simulation also helped the researchers understand why only 137 people survived the disaster.

If the standards of the International Maritime Organization (IMO) had been observed on the night that shocked Europe, most of the Estonia's passengers and crew members would still be alive. According to the IMO's evacuation standards for the construction of passenger ships, hallways, doors and stairways should be designed so that, in an emergency, all passengers and crew members can reach the open decks from the ship's interior and escape in lifeboats and rafts.

In the case of the Estonia, the roughly 40 minutes between the breaking of the bow visor and the capsizing of the ship should have been enough time to enable everyone on board to escape from the ship. But the reality belies the IMO standard. Only 250 to 300 passengers and crew members managed to escape from the ferry.

The simulation illustrates why hundreds of desperate people never made it. For the first time, the Hamburg team, aided by the developers of Advanced evacuation simulation software, was able to take into account the effects of an increasing list on the ability of passengers and crew members to get out of the ship.

According to the researchers, the data they obtained diverged "substantially" from the IMO standards. The calculations for the virtual Estonia show that when a ship lists, its evacuation routes become almost impassable. In the simulation, only 278 of the 989 people on board the ship managed to reach the open decks. The ferry became a coffin for the rest.