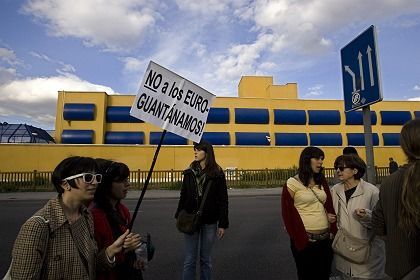 "No European Guantanamos:" protesters in Spain demonstrate against the treatment and conditions at a detention center in Madrid for illegal immigrants. In the future, most stays in these facilities will be limited in Europe to six months.

The European Union wants to create universal rules limiting to six months the amount of time illegal aliens can be held in member states before getting deported.

The European Parliament, along with the European Commission and member states, reached an agreement on Thursday to unify deportation policies. "We have 10 to 12 million illegal persons in the EU  they are modern slaves," said Manfred Weber, a German member of the European Parliament with the conservative Christian Social Union party. Weber said the deal meant Europe would finally have a unified policy for dealing with the deportation of illegal immigrants.

Initially, the EU had wanted to limit the period of detention of illegal immigrants to three months. The French Socialists and other leftist parties wanted to stick to this limit and said they will oppose the compromise. But it is expected that the majority in the European Parliament will vote in favor of the compromise.

In exceptional cases, illegal immigrants could be held for a maximum of 18 months, but most would be sent back to their country of origin after six. The European Parliament is expected to pass the regulation in June, putting an end to a two-year debate in Europe.

The compromise deal would also entail a seven-day period for illegal immigrants to voluntarily return to their home countries. In addition, it would require a re-admission agreement with the country of destination for each illegal immigrant, put special facilities and safeguards in place for unaccompanied children, provide non-governmental organizations with access to detention facilities and impose an EU-wide re-entry ban on involuntary deportees.

Deportation policies currently vary widely in the EU. In Germany, most illegal immigrants who are caught are deported within six months. In France, deportations are much faster, with a 30-day limit. Britain, however, has no limits on the amount of time an illegal immigrant can be detained.

In a related development, the French satirical newspaper Le Canard Enchaine, which is respected for its investigative journalism, earlier this week uncovered a policy that allows police who accompany deportees on their flights back to their countries of origin to collect personal frequent flyer miles from Air France for their trips. With 23,000 deportations a year in France, and up to three police officers accompanying deportees, that's a lot of free flights. The French Interior Ministry has confirmed the existence of the privilege, which is perfectly legal.