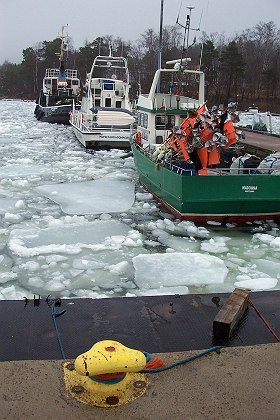 Fishing boats are docked in Mariehamn, Aland Islands. Opposition to the European Union has been steadily rising in Finland's Aland archipelago.

A dispute over the sale of snuff looks like it may be putting the ratification of Europe's Reform Treaty at risk, after a group of Finnish islands threatened to reject the treaty if the EU does not allow them to continue selling the product on board their ships.

The Finnish Prime Minister Matti Vanhanen insisted on Wednesday that he would not allow the autonomous Aland Islands to threaten the European Union's treaty, also called the Lisbon Treaty, over the dispute. But the spat between the group of 6,500 Baltic Sea islands and Brussels could conceivably result in this tiny part of the EU opting out of the treaty completely.

A European Union ban on the sale of oral snuff, or snus, has caused an increase in anti-European feeling on the Swedish-speaking islands which could now lead to a defeat for the EU Reform Treaty in Aland's 30-member parliament.

The islanders have traditionally made good money selling snuff -- a moist form of tobacco that is usually tucked behind the upper lip -- on their ferries that operate between Sweden and Finland, particularly as they are permitted to sell the product tax free. But they have recently been forced to implement the EU-wide ban.

On Wednesday Prime Minister Vanhanen tried to ease fears that the tiny community of 27,000 could scupper the entire ratification process over the issue. "If Aland does not approve it, the judicial situation will be confusing, but it will not stop ratification at the Union or Finland level," he told reporters.

This seemed to contradict an earlier statement by his Minister of Migration and European Affairs Astrid Thors, who told the Finnish YLE news Web site on Tuesday that the Finnish government did not want to see the treaty ratified if it is rejected by Aland.

Helsinki's headache has been made worse by the islanders' resentment at their lack of a voice at an EU level. One of their key demands is a seat in the European Parliament. Elisabeth Naucler, who is the islands' sole representative in the Finnish parliament, told SPIEGEL ONLINE that Aland is furious with Finland for not doing enough to fight for the islands' interests and for not "passing on their messages" to Brussels.

She argues that it marks a deep problem that Brussels has in dealing with this autonomous entity. "Since 1921 there has been a division of power between the Aland Islands and Finland," she says. "But the EU has no mechanism to deal with it." The EU can only deal with one authority, so it falls to Helsinki to represent the islands' interests at an EU level, something the islanders argue it has not being doing.

In the case of the snuff issue, for example, the islanders are pressing for an EU directive that would allow them to sell snuff on ships registered in Aland. Otherwise, they argue, ships will instead choose to register in Sweden which negotiated an opt-out on the snuff ban when it joined the EU in 1995. Shipping accounts for 40 percent of the islands' economy.

The European Commission announced last year that it had "no tolerance" for the sale of snus "given the health risks." But islanders argue that preventing them from selling the product will have no public health benefits since consumers can still buy snuff on Swedish-flagged ferries.

"The Commission's interpretation of the snuff issue clearly harms the competitiveness of Aland and Finnish ships compared to Swedish ships," Minister Thors told YLE, adding that she hoped a deal could be reached on the issue.

While the snuff issue has important economic implications for the islanders, it was the EU ban imposed on duck hunting on the island two years ago that turned many of the islanders against Brussels.

The Swedish-speaking islands have enjoyed widespread autonomy from Helsinki since the 1920s and its parliament has the authority to give its consent to any international treaty before it becomes valid in Aland. The islands voted separately from Finland on joining the EU in 1995 and managed to secure an exemption from the EU's VAT rules, allowing tax-free shopping ships sailing between Finland and Sweden.

This is why the islands are pushing for a seat in the European Parliament. Under the Lisbon Treaty Finland is set to lose one of its European Parliament seats and Naucler argues that Helsinki might have been able to keep that seat if it had fought to allocate it to the Aland Islands.

It is unclear what the legal issues might be like if the islands do not approve the Lisbon Treaty, which has to be ratified by all member states. Ireland will be the only member state to hold a referendum on the treaty, all other countries are putting the revised treaty to their national parliaments.

Nauclear argues that if Aland does go ahead and reject the treaty it would not throw the entire ratification process off course completely. "If Aland says no it would not destroy the treaty, after all the UK already has opt outs from the Lisbon Treaty."

Asked if she thinks the treaty will pass in the end, Naucler says: "I think so. If Finland takes the right stand and tries to negotiate a European Parliament seat for Aland in the future."

"We just need to push a bit and get Finland to push as well."