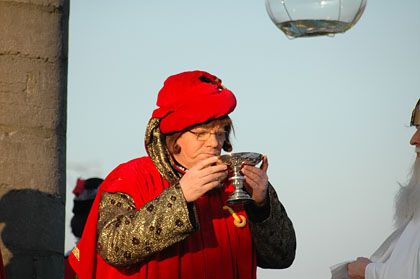 You want me to drink what?

Food related festivals are one thing. But the good folks of Geraardsbergen in Belgium take a slightly broader view than most when it comes to what they consider to be edible.

Every year, the town celebrates the "Krakelingen" festival on the last Sunday in February. And the main attraction, apart from hurling bread rolls at each other, is a ceremony in which locals drink down live, squirming fish soaked in red wine.

The gray fish, known as grondeling, are about an inch long, but some years they're bigger and more difficult to drink down.

"Sometimes they are still trembling a little in your mouth," Guido de Padt, a former mayor of Geraardsbergen, told the International Herald Tribune in March. "You don't taste them -- but the wine is good."

The ceremony enrages animal rights campaigners who say the fish die an agonizing death. Their protests have succeeded so far in whittling down the number of people permitted to drink fish to around two dozen. They hope to eradicate the pageant one day or to have the fish replaced by fish-shaped marzipan.

But Geraardsbeen's leaders are proud of their tradition, which dates back centuries. It is believed to derive from an ancient belief that swallowing live creatures revives the human body for spring.

The festival is named after the less controversial practice of throwing doughnut-shaped bread rolls -- the Krakelingen -- to the townsfolk to commemorate a medieval siege in which the besieged threw food over the walls to show they had limitless supplies.

Geraardsbergen, located in northeastern Belgium in the Flemish-speaking part of the country, is one of the country's oldest cities. Once the fish drinking is over you can wander over to the town's other main attraction -- Belgium's oldest "Mannekin Pis," a fountain sculpture showing a naked little boy urinating. The more famous Mannekin Pis statue stands in Brussels.