"It's getting worse," says Massimo. Because the Italian municipality, where the self-employed handyman works, is practically bankrupt, Massimo usually gets paid months late. Sometimes it can even take a year before he gets paid. But he still has to buy materials and pay his taxes immediately, often on credit.

Given his situation Massimo has little desire to stay in Italy. Instead he wants to try his luck up north. "I am going to Germany," he says in broken German. Massimo wants to go to Ulm, a southern German city where he has relatives. He wants to work there and earn more money than he can at home. But there's just one small problem: he has to learn German. "It is hard," he moans in German, but he says he'll get there.

Like Massimo, thousands of Italians are struggling to learn German at the moment. They find the grammar as perplexing as the tongue-twisting pronunciation. Italians simply cannot say words like "Schleswig-Holstein," a northern German state, or "Bordsteinkante," meaning curbside. Even Italian television racing experts stumble over the name of Formula 1 driver Michael Schumacher, who is idolized in the country.

Despite its challenges, learning German, long scorned, is now suddenly popular at schools and universities, at branches of the Goethe Institute cultural association or in private language schools. More than 400,000 Italian middle and high school students are now choosing German as a second foreign language. In 2011, the number of people studying German jumped 18 percent and this year it's likely to be an even larger increase. French and Spanish, on the other hand, are on a downward trend.

Italians who are beyond school age are leaning German in classes like "German for doctors," or "German for lawyers." Teachers and engineers are also rushing to learn German. They think, or at least hope, that mastering the guttural, consonant- laden northern European language will give them a better chance to find a good job with a decent salary.

They may be right. Germany is Italy's largest trading partner, accounting for 16 percent of imports and 13 percent of exports. More than 2,000 firms in Italy are branches of major German companies like Bosch, Mercedes and Lufthansa or are owned by German businesses. These companies employ 170,000 Italians and those who learn German have better chances of career advancement. And doctors, lawyers and other professionals who want to move to Europe's strongest economy must of course learn the language first.

Consonants Instead of Lemons

Italians aren't the only ones who have discovered the economic opportunities that come from learning German. It has become popular in all crisis-hit countries along the Mediterranean - in Spain as well as Portugal. In Greece, the number of people studying German rose 30 percent within six months.

With soaring unemployment across Southern Europe, it comes as little surprise that people want to find a way out. Even well-educated young people have little chance of landing a decent job at home. That's why engineers, doctors and IT experts are moving to a country where consonants bloom instead of lemons and where the engine of growth continues to hum even in the euro crisis.

There are already signs of this growing wave of migration from south to north, though the wave isn't nearly as big as it was during the 1950s and 1960s when Germany desperately needed what it called "guest workers" to make for its post-war shortage of manpower. Unlike in those days, there is no demand for steel workers, garbage men, pizza makers and ice cream sellers now. Instead, Germany is offering high-end jobs for the highly skilled.

Admittedly not everyone toiling away at learning the crisis-proof foreign language wants to move north. For example, the 39-year-old Roman banker Alessandro says that Germany is too cold, too foreign and that the food is tough to digest. "You guys make everything with butter and Italian stomachs simply cannot tolerate it," he says. Alessandro wants to improve his chances in the domestic labor market. He works for a branch of a German bank and much of the internal communication is in German. He says that those who don't master the language are always at a disadvantage.

Even Italian companies are discovering the value of learning German. Some 80 percent of Italian firms offering jobs requiring with two foreign languages are looking for people with German skills. That applies especially to jobs in the tourism sector as four out of every ten travelers who flock to "Bella Italia" come from German-speaking countries. Those who can greet guests with a warm German welcome or can ask them how they are doing in their native tongue get brownie points from guests as well as from their bosses. 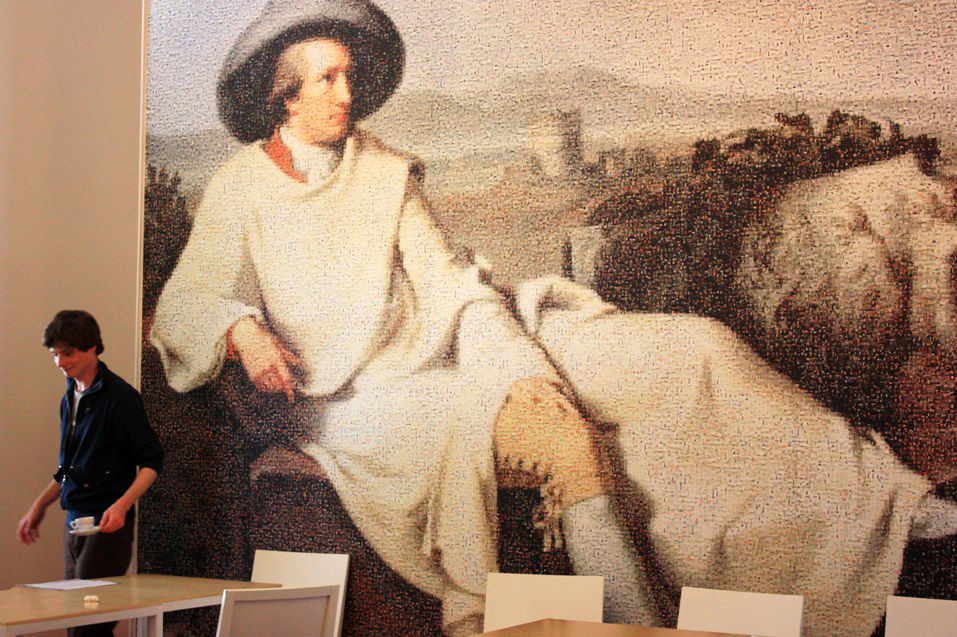 In Rome's Goethe Institute, where many are learning German to improve their job outlook.