German Chancellor Angela Merkel defended her tough stance on reforming EU budget rules on Monday as criticism of her policy mounted in Europe.

"Everything is at stake -- if the euro fails, then Europe will fail," Merkel told delegates at the party congress of her conservative Christian Democratic Union (CDU) in Karlsruhe, southwestern Germany. Market "excesses" caused the crisis and "markets have to bear the consequences of their actions," she said. "It's up to us. It's our task to create a new anchor for a culture of stability in Europe."

Greek Prime Minister George Papandreou accused her on Monday of worsening the euro debt crisis by insisting that private sector bondholders should share the costs of future bailouts of troubled nations under new EU rules due to come into force in 2013. He said her insistence on such a mechanism had pushed up bond yields for Ireland and Portugal.

"This could create a self-fulfilling prophecy ... This could break backs. This could force economies towards bankruptcy," said Papandreou during a visit to Paris. His remarks echoed a growing chorus of criticism of Merkel's position from European leaders and senior officials.

The prime ministers of Spain and Luxembourg, Jose Luis Rodriguez Zapatero and Jean-Claude Juncker, have warned that the proposal could drive investors out of the euro zone. European Central Bank President Jean-Claude Trichet said forcing investors to take losses in a sovereign bailout would undermine confidence.

Irish Prime Minister Brian Cowen was also critical, telling an Irish newspaper that the German and French leaders had complicated his efforts to overcome the crisis. Merkel and French President Nicolas Sarkozy had struck a deal on EU reform in Deauville, Normandy, last month and then browbeat their European Union partners into accepting it at the EU summit at the end of October.

"It hasn't been helpful," Cowen told the Irish Independent newspaper last week, referring to the private-sector bond plan. "What has been said there has had, I think, an unforeseen consequence, perhaps."

"The consequence that the market has taken from it is to question the commitment to the repayment of debt," he said.

The bond yield spreads of high-deficit nations such as Greece, Ireland and Portugal have soared since Merkel last month stepped up her drive for a debt restructuring mechanism for troubled euro zone nations. EU finance ministers have since said any new rules would not apply to existing bonds, but that has failed to calm nervous markets.

Ireland on Sunday did not rule out turning to the European Union for help. At the EU summit last month, Merkel had managed to strong-arm fellow leaders into giving tentative backing for something most of them had been opposed to -- a change in the wording of the Lisbon EU treaty to provide a permanent mechanism for handling future debt crises once the existing €440-billion euro ($600 billion) safety net expires in mid-2013.

Merkel desperately needs the amendment to assuage the German Federal Constitutional Court which is due to rule on the legality of Berlin's contribution to the euro rescue fund, hastily arranged in May to fend off an onslaught by speculators on the single currency after Greece almost went bankrupt.

With a permanent, legally binding mechanism in place, she won't have to negotiate the inevitable extension of the safety net, a deeply unpopular measure in Germany where voters are incensed at having had to bail out high-debt nations this year. She faces a general election in 2013.

In her speech on Monday, billed as an attempt to reverse the CDU's sharp decline in popularity this year, Merkel refrained from mentioning Ireland.

At the congress, CDU delegates gave Merkel a slight dampener by re-electing her as party leader with a slightly reduced majority -- 90.4 percent, as opposed to just under 95 percent at the last vote two years ago. 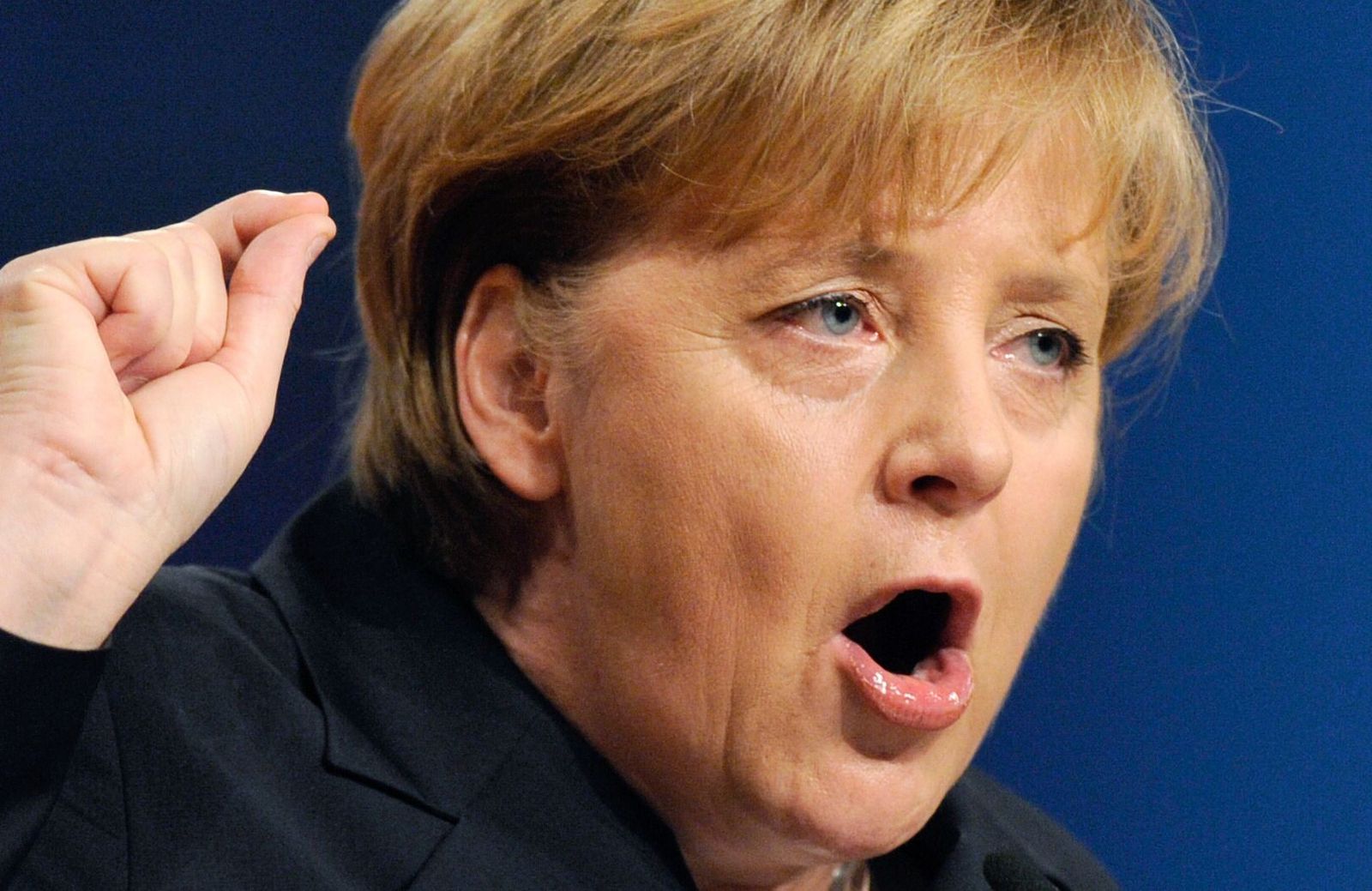 Angela Merkel holding her speech at the CDU party congress on Monday.