It's two days before Jessica will be unable to pay her rent for the first time in her life, and she is standing at the gate of the private charity "Hermandad del Refugio" in downtown Zaragoza. Here in the capital of the Aragon region, between Barcelona and Madrid, the summers are hot and the winters windy. Around 10 a.m. in late May, the sun is already scorching.

There are 18 men and women ahead of Jessica in line, standing silently, their arms folded across their chests. They are all pulling shopping trolleys, into which they'll pack milk cartons, noodles and two kilograms (4.4 pounds) of chicken. Without the free food provided by the Catholic charity, the people in line would have trouble making ends meet.

Jessica is wearing black wireless headphones and Converse sneakers, which are still immaculately white. Jessica, 27, is new here. "Come on in," says the man at the door. "But first, disinfect your hands."

The coronavirus pandemic brought large parts of the Spanish economy to a standstill. When Prime Minister Pedro Sánchez announced the lockdown on the evening of March 14, shops, restaurants, concert halls and shops all closed down and from one day to the next, public life and the economy ground to a halt. Within six weeks, 760,000 people had lost their jobs -- on top of the more than 3 million people who had already been unemployed at the beginning of the year. Another 3 million were furloughed.

Jessica, too, lost her job, though she didn't actually have to be laid off. Jessica is a singer and In March, she was still working with an orchestra. Technically, she was only ever employed for the day of the performance, but she still earned enough money to survive. A portion of the 900 euros ($1,016) she earned a month was paid out in cash.

She received notice of her termination via WhatsApp and in mid-May, Jessica went to a food bank for the first time. She'd rather not give her last name. "It makes me sad to stand in line here," she says. The charity in downtown Zaragoza is currently providing 2,271 people with free food, and increase of 504 since before the lockdown.

The same thing has been happening all over Spain. In the cities of Madrid and Barcelona, but also in rural areas, Catholic charities have provided 60 percent more aid than in previous years, says Raúl Flores of the Foessa Foundation, which is investigating the social situation for Caritas.

The lines of hungry people are growing longer and longer and they are the most visible sign of what the country can likely expect in the coming months: the worst economic crisis since the end of the Spanish Civil War in 1939. According to worst-case estimates by the Bank of Spain, the economy could shrink by up to 14 percent and unemployment could rise to 21 percent, which would push the country's sovereign debt load to 130 percent of the country's gross domestic product.

A New Social Law Is Born

The coronavirus crisis has accelerated the debate in Spain over the introduction of a basic income, since state-funded social aid does not yet exist. It wasn't until the death of the dictator Franco in 1975 that a welfare state developed here, though it was rather week. Families with children receive hardly any support.

The introduction of a basic income was therefore the main election promise of the leftist Podemos party and they made the program part of their coalition agreement with the Socialists last fall. Now the Sánchez government is rushing to get the project off the ground to prevent hundreds of thousands of people from plunging into the abyss.

"It is a historic moment for our democracy," said Podemos leader and Deputy Prime Minister Pablo Iglesias, "the birth of a new social law."

Spain, after all, still hasn't fully recovered from the consequences of the financial and economic crisis of 2008. Even before the outbreak of the virus, the poverty rate hovered around 20 percent and the labor market is divided, with too few people enjoying permanent contracts with unemployment benefits, and too many having to make do with temporary contracts that often only last for a few days. According to statistics from the Spanish employment agency SEPE, 8.4 million people are now looking for a job.

"A historic moment for our democracy."

The Only Way to Survive

Thus far, only regional governments have allocated aid money -- paltry sums that reached only 75,000 people, or barely a third of all the poor, according to social researcher Flores. Basic income would provide financial security for the most vulnerable 850,000 households.

But an "ingreso mínimo vital," literally a "minimum income to live," comes with strings attached. The program would only apply to people between the ages of 23 and 65 and they must have been registered as living in Spain for at least one year without interruption. They must also be actively looking for a steady job, be involved in a continuing education program or, in cases of drug dependency, be enrolled in a therapy program. The social welfare office would look into applicants' assets and existing income and that would be topped up to a level of 462 euros per month for singles and up to 1,015 euros per month for a family of five.

For 2.3 million Spaniards, a basic income is likely the only way to get through the corona crisis. Nowhere is this more evident than in Madrid, the city hit the hardest by the pandemic. The capital is one of the richest regions in the country, yet there are plenty of needy people, such as in the tangled side streets from behind the Puerta del Sol to the Plaza de Jacinto Benavente.

The Ave Maria food bank, run by the city, mostly takes care of the homeless, but since March, geriatric nurses, waitresses and salespeople have also been showing up. All of them have lost their jobs. The crisis first hit those who worked illegally or only had short-term contracts, often foreign workers who had found a precarious job during the recent economic upswing. They were among the first to be laid off.

One of them is Mario Ignat. The 30-year-old came to Spain from Romania eight years ago and has been working in construction ever since. But there's no more work to be had. In Madrid alone, 138,000 people have lost their jobs and half a million have been furloughed, a consequence of around 1,000 companies going bankrupt each week during the lockdown.

Ignat hasn't yet lived in Spain for 10 years, so he doesn't have Spanish citizenship. He earns barely enough to pay rent and there is nothing left over for going out with friends, having a beer in the bar next door or even cooking for himself. The new basic income could significantly improve his life.

For Mario Ignat and Jessica, a lot depends on when the money will actually be paid out. They can apply for the basic income starting on June 15 and before the end of the month, the first 100,000 eligible applicants will receive aid retroactively going back to June 1. That, at least, is what the government has promised. Jessica hopes that she won't end up on the street before then.

With reporting by Oliver Imhof in Madrid 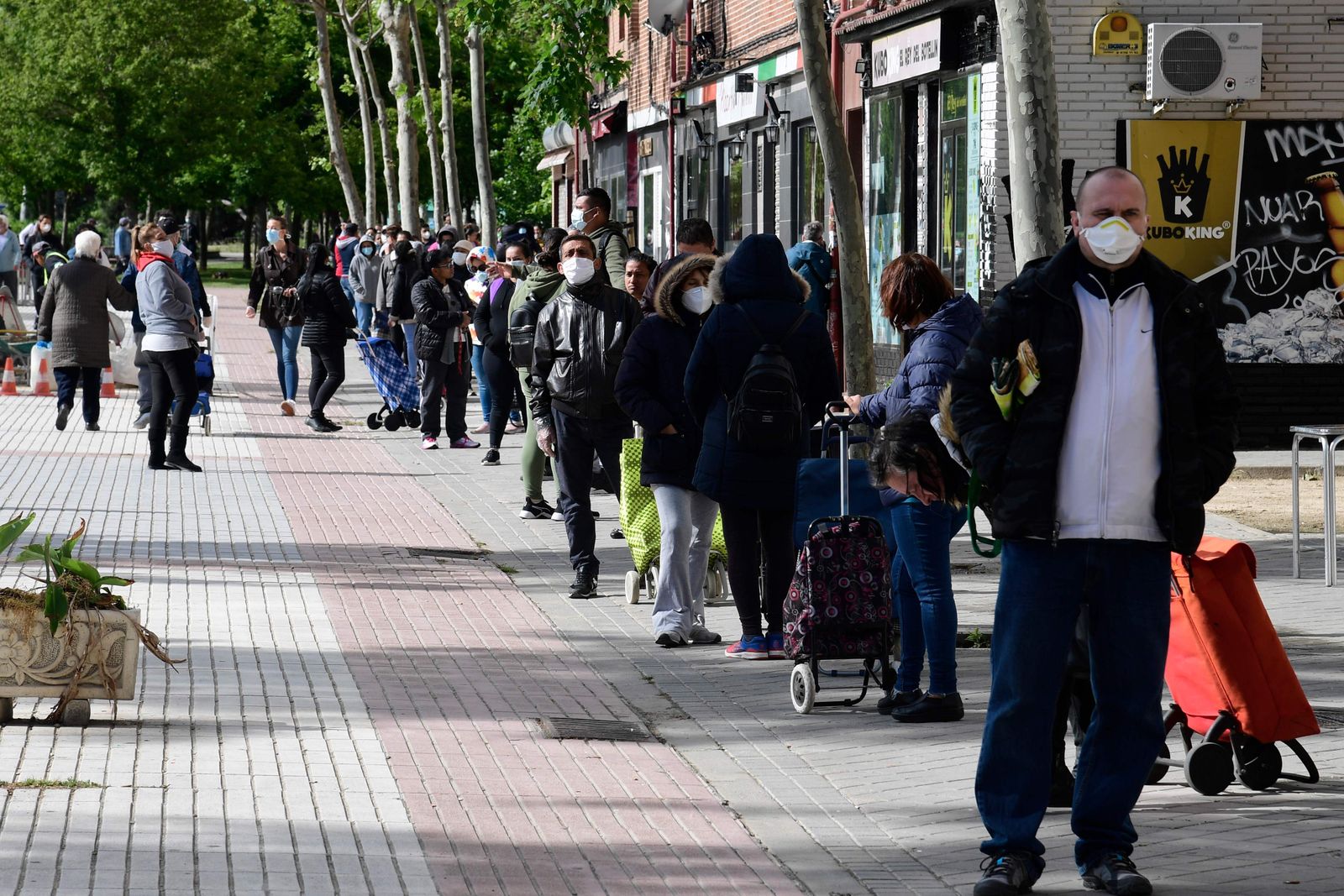 Residents waiting in line at a food bank in Madrid 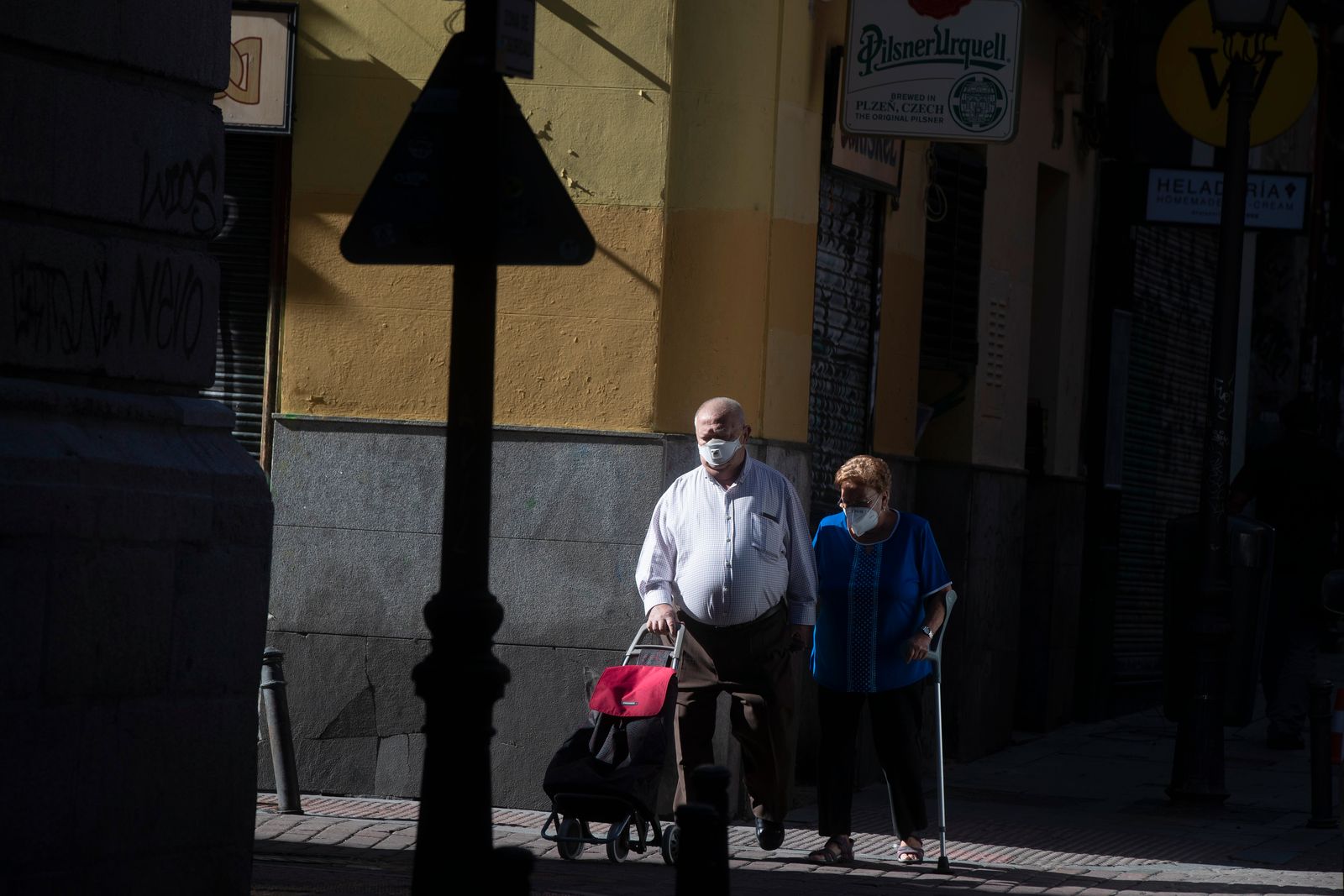 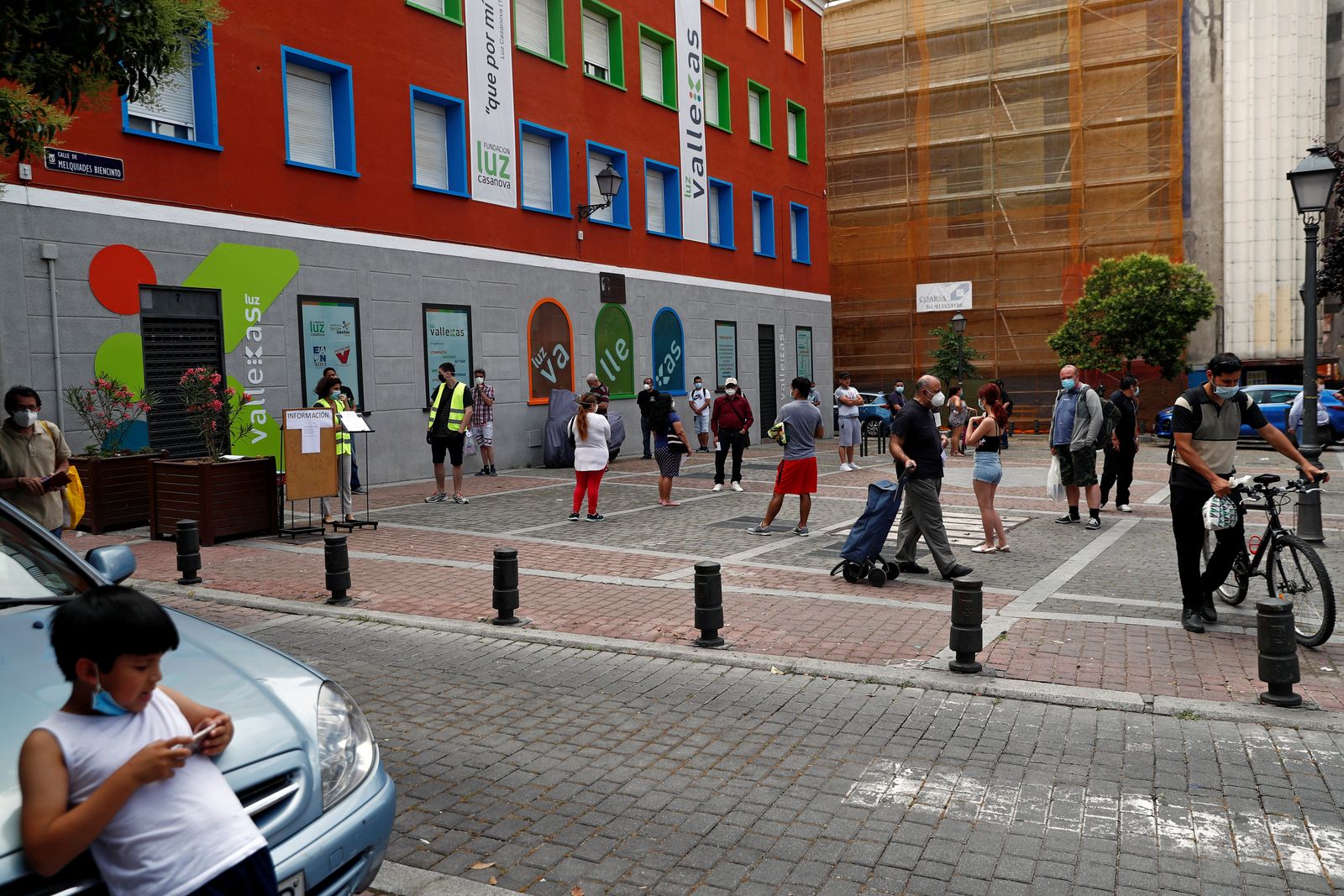