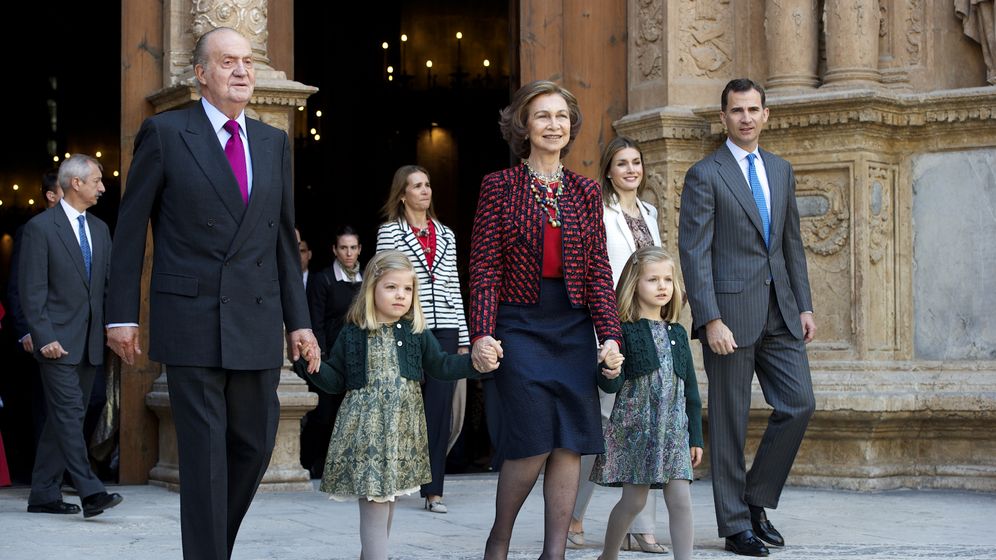 How does a king who has gone astray apologize to his people? With a contrite expression on the television news and an ostentatious show of humility. "I'm sorry. I was wrong and it won't happen again," the 74-year-old Juan Carlos assured Spaniards in a brief televised statement last Wednesday, looking like a boy whose mother had just caught him committing a prank.

"An unprecedented gesture," a columnist with the Madrid daily El País called the royal words. The people had learned that the king had been hunting elephants in Botswana, because he had broken his hip at night and had to be flown home for surgery. As Spanish citizens learned from the papers, he had reportedly been the guest of a Saudi Arabian magnate, and was accompanied by a German woman, a member of the aristocracy who is said to be very close to him.

The photos of the big game hunter on cover pages, holding his gun as he stood in front of a gray corpse and an ivory hunting trophy, even annoyed Spain's royalists. He was on a luxury safari (at an estimated cost of more than €40,000, or $52,000) at precisely a time when the financial markets are demanding higher and higher risk premiums on Spanish government bonds. It's also a time at which conservative Prime Minister Mariano Rajoy feels compelled to beef up his €27 billion austerity package with another €10 billion in budget cuts to education and healthcare. To make matters worse, the Spanish oil company Repsol is effectively being expropriated in Argentina. In other words, while their head of state was enjoying himself in Africa, his subjects were experiencing one of the worst weeks of the year.

The king's apology represents a sea change. Shouldn't such a weak man have to abdicate? How will the monarchy continue? These are questions that are being discussed in blogs and on talk shows, while newspaper columnists are publicly debating an institution that was considered sacrosanct until recently.

"Who said that someone should be king until death?" asks Spanish author Elvira Lindo. Even a leading socialist is demanding that Juan Carlos decide whether he wishes to continue as king or if he would rather lead "a different type of life." The chairman of the United Left accuses the monarch of a "lack of ethics." These are harsh tones that would have been unthinkable only a few months ago, even for communists and members of small republican parties.

Since Juan Carlos was crowned more than 36 years ago, after the death of General Francisco Franco, he has worked to earn the respect and admiration of Spaniards. He was instrumental in bringing about the successful transition to democracy after almost four decades of a deeply Catholic dictatorship, which ended with the 1978 constitution defining Spain as a parliamentary monarchy.

When armed forces of the Guardia Civil occupied the parliament in February 1981, the king helped stop the attempted coup. Since then, he has been exempt from all public criticism. Even the boulevard press has remained silent on his lifestyle, even when there was plenty to report on. After having captured the throne with the help of his wife, who is of the same age, Juan Carlos allegedly practiced his seductive skills primarily outside the marital bedroom in the Zarzuela Palace.

On the island of Mallorca, where the royal family has its summer residence, there were rumors of a love affair between the monarch and a local decorator. Residents of the Spanish capital whispered that their rey, or king, would often drive his motorcycle through the streets at night, unrecognizable in his black leather outfit and helmet, to disappear into the garage of a former beauty queen.

The macho man on the throne filled most Spaniards with pride. His wife, who doesn't eat meat and eats very little fish, and who likes to wear conservative skirts that cover the knees, was pitied by most. Until now, she has kept up the appearance of an intact marriage and fulfilled her ceremonial obligations. But after her husband's hip operation, she allowed 72 hours to pass before appearing at his sickbed, where she stayed for only 15 minutes.

Breaking the Code of Silence

The omertà, as one source close to the Spanish royal family who prefers not to be identified calls the current pact of secrecy, in a reference to the mafia's code of silence, has now been broken. Early this year, author Pilar Eyre published her book "La Soledad de la Reina" ("The Loneliness of the Queen"), in which she exposed the monarch's chronic infidelity.

Juan Carlos is alleged to have had 1,500 lovers. In 2001, Eyre writes, a woman claimed that she was the result of a liaison between the king and Princess Maria Gabriella of Savoy, and that she intended to file a paternity suit. Juan Carlos is even said to have had a flirtation with Princess Diana, the now-deceased wife of the heir to the British throne. After his hunting accident, journalists openly revealed the name of his German companion for the first time: Corinna zu Sayn-Wittgenstein, née Larsen, 47, a woman who has had two failed marriages and has two children.

The Spaniards' deep loss of trust in their king was triggered by a scandal surrounding his favorite son-in-law, Iñaki Urdangarin. A former professional handball player from the Basque country, who is almost 2 meters (6 feet 6 inches) tall, he lived with Princess Cristina and their four children in Barcelona. The marriage was worth a lot to the royal family, because it helped strengthen the bond between the monarchy and the Basques and Catalans, who have a tendency to want secession from Spain.

But now the son-in-law has been testifying in court in Palma de Mallorca since February, under suspicion of having embezzled public funds through a charitable foundation. Last week, the judge in the case apparently received documents that allegedly prove that Juan Carlos personally vouched for Urdangarin's questionable commission deals in sports events. In his Christmas address, the king had said that "justice is the same for everyone."

The first investigations of a member of the royal family have plunged the monarchy into its "worst crisis" since Franco's death, says Carmen Enríquez, a court reporter for many years. According to Enríquez, the heir to the throne, Crown Prince Felipe, 44, is especially concerned. His great-grandfather was driven into exile when the republic was proclaimed in 1931. Franco put a violent end to the republic with his 1936 coup. But a portion of the population continued to support the republic in their hearts throughout the dictatorship. This explains why many citizens are not die-hard monarchists, but have at best only developed into supporters of Juan Carlos.

In an opinion poll conducted by a Madrid-based social research institute last October, the royal family wasn't even given a grade of "adequate." Young Spaniards under 25, almost half of whom are out of work, no longer seem to care about Juan Carlos' efforts during Spain's transition to democracy.

At the end of December, the royal family had to reveal how high its annual income is. Last year, the state paid the royal family €8.4 million ($10.9 million). The British queen, by comparison, receives almost five times as much. In 2012, the Spanish royal family's budget was cut by 2 percent. The regent's annual gross salary is €292,752, while the heir to the throne receives less than €150,000. Both pay income tax of about 40 percent.

The Spanish crown prince could earn more money if he worked in the private sector. Felipe studied law and economics in Madrid and then earned a master's degree in international relations at Georgetown University in Washington. He had a relatively modest house built near Zarzuela Palace, where his parents live, he married journalist Letizia Ortiz and his daughters often wear skirts and blouses from department stores. Felipe is the citizen prince of the Spaniards.

Chance of a New Beginning?

The moment to "rethink the role of the crown in democracy and in contemporary society" seems to have arrived, at least according to Julián Casanova, a contemporary historian at the University of Zaragoza. According to Casanova, the crisis in the monarchy is not the result of a burgeoning republican movement. Instead, he says, "a few of the columns that supported this positive construct of the monarchic structure have collapsed."

Politicians in all parties are unanimously calling for more transparency and a clear definition of the purpose of the royal family. There are no provisions in the Spanish constitution for the king to abdicate voluntarily. Nevertheless, there are those who, for the first time, see in Felipe the chance of a new beginning.

The author Rosa Montero says that maybe the crisis isn't the right time for a change to the system, but that this particular member of the royal family could be replaced. In an opinion piece for El País, she proposed gathering signatures on the Internet for a petition to demand that passionate hunter Juan Carlos step down from at least one role -- that of honorary president of the Spanish branch of the World Wide Fund for Nature.