Rhut Cristóbal knows what it feels like to be overrun by a pandemic. After all, she has already lived through it once. Half a year ago, at her medical clinic in Vallecas, a working-class neighborhood in southern Madrid, patients suddenly began arriving with sweaty foreheads and struggling to breathe. The oxygen levels in their blood plummeted even as they were sitting in the waiting room.

Back then, in March, Madrid began storing the dead in ice-skating rinks and setting up field hospitals. Cristóbal - a small, wiry, 38-year-old nurse with lively eyes – worked to the point of exhaustion. And she saw people die. She was frequently in the position of having to comfort distraught family members and she would race to home-visits in her car. Often, she arrived too late. The ordeal didn’t come to an end until after a stringent lockdown that lasted for several weeks.

Now the pandemic is overtaking Spain once again. On a recent Monday in September, Rhut Cristóbal rushes down the clinic's hallway, the heads of the patients waiting on the benches to her right and left turning to follow her. The line outside reaches the edge of the street. The throng is almost as great as in March, and three-quarters of the tests in the health center are positive. A wheezing man with beads of sweat on his forehead drags himself through the waiting room. "The second wave is here,” Cristóbal says.

No country in the EU is currently registering more new infections than Spain, with the numbers rising rapidly, despite the country having been subject to one of the toughest lockdowns in Europe. In recent weeks, it has reported an average of over 250 confirmed COVID-19 cases per 100,000 inhabitants. That’s twice as many as in the U.S. and 10 times as many as in Italy. On Monday, new lockdown measures went into effect in Madrid.

As recently as early summer, the center-left government of Prime Minister Pedro Sánchez believed it had the virus under control. But shortly after the most severe measures were lifted, the numbers began shooting upward again.

Spanish officials believe that the second wave simply started here earlier than elsewhere – and that Spain is just a couple of weeks ahead of countries like France and Austria. For Europe, that would be bad news: Spain could reflect what lies in Europe's future.

Of particular concern, the infection numbers in some parts of Spain are higher than they were in the spring. Officials say that is partly a function of increased testing: According to the Health Ministry, 70 percent of cases are now being caught, compared to only 10 percent in the spring. Almost half of the patients have no symptoms. Furthermore, the mortality rate has dropped to below 1 percent, with about 60 people dying of COVID-19 per day as compared to over 1,000 in March. Another difference: This wave seems to be arriving in slow motion, but the intensive care units are filling up, nonetheless.

Attack on a Lifestyle

The Malasaña neighborhood of Madrid is a colorful, diverse neighborhood, with restaurants next to bars, and colorful flags hanging from the balconies. On this warm September evening, the streets are emptier than usual, but the bar and restaurant patios are full, with young Madrilenians sit at the tables in small groups. When the drinks come, they take off their masks.

The proximity of the guests is, of course, a problem, says a young teacher. He says that he and his friends have grown used to greeting each other with their elbows, and that they no longer hug their grandmothers at home. But they can’t forego the "sobremesa,” the tradition of spending time together after a meal.

"In Spain, there is a lot of physical contact,” says Miguel Hernán, an epidemiologist at Harvard who advised the government in the spring. Speaking loudly, as is common in Spain, also produces large amounts of aerosols. The longer the "sobremesa” lasts, the more dangerous it gets.

"The virus is attacking the Spanish way of life,” says Miguel Otero, a political economist from the Real Instituo Elcano. He argues that the transition that is now being asked of Spaniards is much greater than the one being asked of Germans. During the strict lockdown, when millions of people were only allowed to leave their homes to make purchases, he argues, the desire for social contact became pent up, and then exploded this summer. Young people went out, they celebrated in reopened discos. They first infected one another and now increasingly also their parents and grandparents.

Now, though, Spain finds itself at a turning point. The discos are closed again, and the memories of the lockdown are returning.

A hand-written poster hangs at the entry to the health center in Vallecas. Rhut Cristóbal and her colleagues have written the day’s key figures on it as a way of apologizing for the long wait times: "560 treatments, 98 corona tests, 49 COVID patients. We are missing: 6 of 16 doctors. We are doing everything we can.”

For years, conservative regional governments have been making cuts to the health-care system. Now, there aren’t enough nurses and doctors. Patients are receiving their cancer diagnoses too late. Operations are being pushed back. Cristóbal herself has hardly any time at all for her sick patients. She and her colleagues in the health centers are also now being tasked with tracing the contacts of their positive cases. "We have a maximum of 15 minutes per case,” she says. The nurses are forced to limit themselves to doing only what is absolutely necessary. "We can only call the family or the roommates,” she says. The patients are responsible for informing their friends or people they had contact with themselves.

Vallecas is one of many densely populated neighborhoods in Spain. Over 15,000 people live here per square kilometer, which helps explain why Vallecas has one of the highest densities of COVID-19 cases in the world. It makes it all the more important to trace the contacts of infected people and isolate them. But that is hardly being done.

When the first wave ebbed, many Spanish regions pushed to be released from the lockdown and to take back control of their health-care systems. But they didn’t hire enough people to do contact tracing. The situation in Madrid was particularly inadequate. Today, the capital has only about 800 scouts for 6.6 million inhabitants.

Officials in the Health Ministry believe that Madrid should have intervened more aggressively. The conservative regional government, however, skirted tough restrictions to avoid placing a burden the economy. The management of the pandemic is suffering under an ideological struggle.

The damage, though, has long since been done, with the rising infection numbers destroying the hoped-for comeback of the tourism sector. That is abundantly clear on this September morning in Torrox, a destination on the Costa del Sol that is popular with Germans.

The sun is shining on the sea and the forecast calls for 26 degrees Celsius. The calm Mediterranean is warm. A perfect day for tourists - if only they were here. Rafael López already knows the day will be a flop. Sporting a white mustache, Safari Bar’s 69-year-old owner is setting up two-dozen tables on the promenade, breathing heavily through his blue surgical masks. He says the work will be in vain. "Normally, about a hundred guests sit here in the afternoon, yesterday is was 10 – on a Sunday!”

"Tourism makes up almost 70 percent of our economy,” says Mayor Oscar Medina says. "And the Germans are the crown jewel for our tourism.”

Almost 4,000 Germans are registered as living in Torrox. Almost 3,000 own real estate here. Most of them are retirees. But now they are almost all gone.

July was still pretty tolerable. At times, the spots on the beach were almost full. But then, the second wave began, closely followed by travel warnings from Norway, the United Kingdom and Germany. Things grew quieter and quieter in Torrox.

Many restaurants and businesses have now closed. Rafael López is also considering closing Safari Bar for the rest of the season.

Normally, tourism makes up one eighth of Spain’s economic output and employs 2.6 million people. Now the sector’s collapse is pulling the entire economy down. In 2019, Spain counted almost 193 million hotel stays between January and July. In 2020, that number was only about 56 million. According to internal estimates, the sector will lose almost 100 billion euros ($118 billion), and the desired return of mass tourism in the fall will also not happen – even if the infection numbers go down again. Ryanair, easyJet and Eurowings have already thinned out their flight schedules.

The consequences reach far beyond the sector. "For Spain, foreign tourism is central,” says Gabriel Felbermayr, the president of the Kiel Institute for the World Economy (IfW). Depending on the estimate, the country's economic output is set to slump between 11 and 15 percent.

Over a million Spaniards have lost their jobs in the second quarter, not including hundreds of thousands of people who have been furloughed, with the state paying for some of their wages. According to the think tank Fedea, 1.25 million people could face layoffs by the end of the year. Once again, as they were during the financial crisis, the young will be especially hard hit. After that economic downturn, many of them were only able to get "trabajos basura” – badly paid, precarious "garbage jobs.”

Even these are now endangered.

Felbermayr, the economist, fears that the divide between the north and the south in Europe could grow even deeper: "If the recession in Spain ends up being twice as severe as in Germany, we cannot even that out with any kind of recovery fund or aid package. Nobody will offer that much money,” he says. "Europe and the eurozone will become even more heterogenous. With this, the danger of conflicts over distribution will rise.”

The winter will be hard for Spain’s economy and society. How hard depends on the country’s ability to control the second wave - or if it loses control.

Back in Madrid, it is already dark when Rhut Cristóbal changes out of her smock and into a sweater. "I cannot believe," she says, "that we learned nothing from the first wave."

It remains to be seen. On Friday, the regional president of Madrid announced new lockdown measures for parts of the city, and they went into effect on Monday. Fully 850,000 people are affected by the rules, including those living in Vallecas. 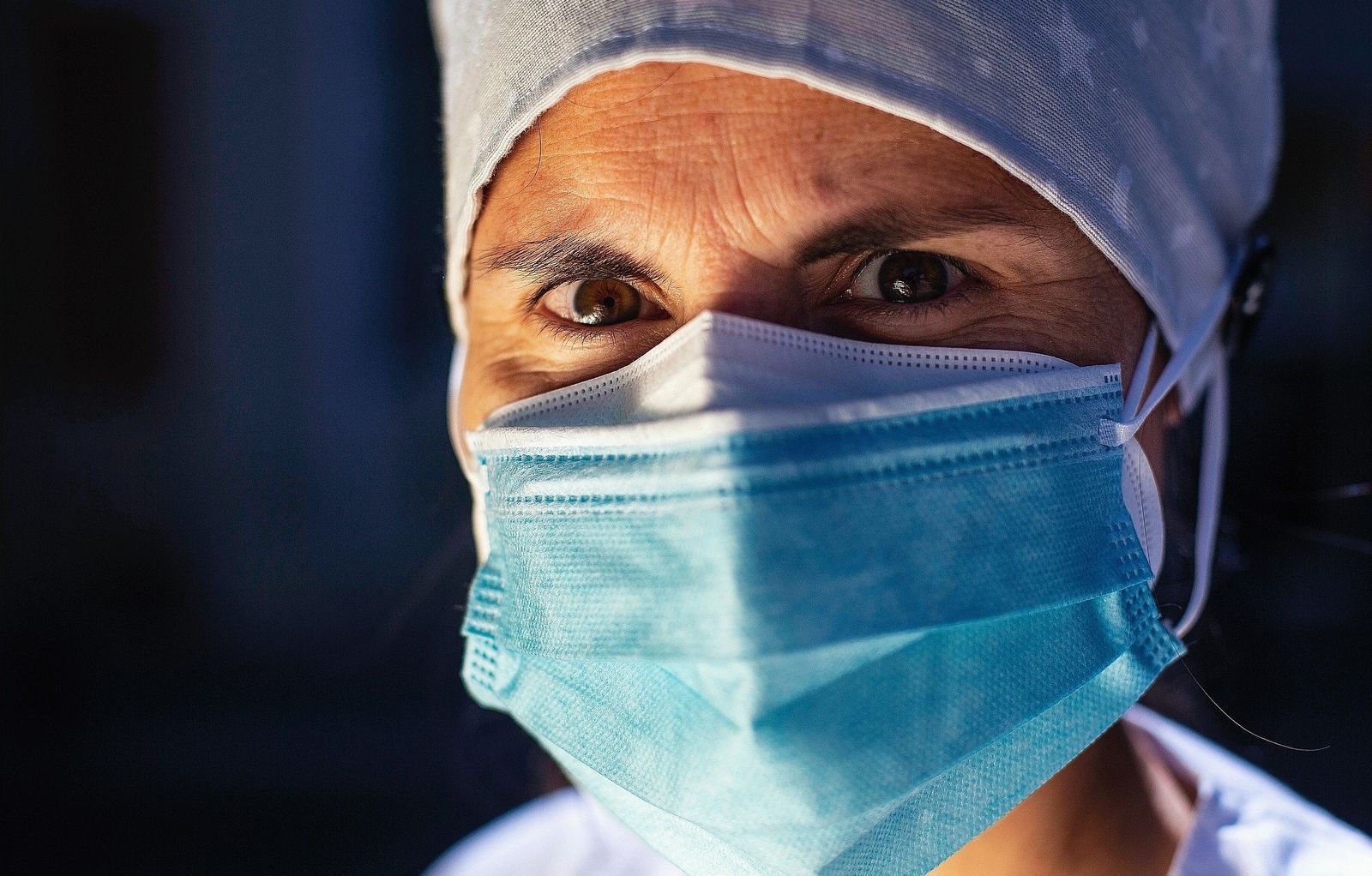 Nurse Rhut Cristóbal: "I cannot believe that we learned nothing from the first wave."