The celebrations continued well into night on Wednesday, with fireworks, flags, and a lot of beer, noise and excitement. The chorus of horns on the streets went on for hours. And the next day the newspapers only had room for one story on the front pages: the brilliant victory of the Spanish national team over the Germans. "The best in the world," was one headline above a photograph of the Spanish footballers leaping into each others arms with joy.

Fernando Herrero has had little time to celebrate the semifinal victory. The lean 35-year-old with the dark blond hair and hunched shoulders is too busy dealing with billions of euros of debt.

Herrero is the general secretary of the Banks and Insurance Consumers' Association of Spain (ADICAE). The consumer protection group has had to step in to help heavily indebted homeowners ever since the real estate sector collapsed. And that means an incredible amount of work. Hundreds of thousands of Spaniards can no longer afford to pay their mortgages, Herrero says. The association fears that this year could see more than 200,000 evictions. In 2008 there were 50,000.

The economist, who has been working for the organization since 1998, sits in a bar in Madrid, one like countless others in the city, with simple wooden furniture, and a long glass counter on the bar full of tortillas, Spanish potato salad and other tapas.

Herrero doesn't even glance at the small plate of sausages that comes with his beer. And the football victory doesn't cheer him up much either. "That is a temporary relief for the people," he says, while he checks his Blackberry for the third or fourth time for messages. But the many people who don't know if their money is going to see them through to the end of the month are not going to be saved even by a historic victory in the final on Sunday.

The football dream that is currently gripping Spain may well be a distraction but it doesn't change much about the uncertainty in the country. Even during half-time on Wednesday evening this German reporter was asked if Spain was soon to be pushed out of the euro zone.

And when it comes to the question of whether a win on Sunday could give a boost to the economy, Madrid analyst Jorge Lage of CM Capital Markets is rather skeptical: "Only on the very short term, at the most."

The euphoria will only continue for a few days, other experts believe. Then the country is going to have to get back to dealing with its problems. In Germany the wild rumors about Spain having to avail itself of a European Union rescue package may have subsided but in Spain itself the politicians and bankers are still struggling with the crisis. Unemployment is now over 20 percent and is affecting young people most of all, while banks are facing significant write downs due to the bad mortgage loans.

And so far no one has come up with any answers to the question of how to get out of this mess.

'We Lived Beyond Our Means'

First and foremost, the difficult legacy of the immediate past has to be worked through. Ever since the property bubble burst and houses and apartments rapidly lost value, millions of property owners have been fighting for their very existence. Between six and eight million Spaniards have gone into debt to buy property, ADICAE calculates -- about 20 percent of the population. And there is no possibility of declaring private bankruptcy in Spain.

"We lived beyond our means," says Herrero soberly. The entire country indulged in unbridled consumerism for years. "As soon as a new iPhone or the latest PlayStation was available, people would get in line." And many consumers paid no attention to how they were supposed to finance this lifestyle, "because the banks were completely irresponsible when handing out loans," Herrero says. Money was simply thrown at the Spanish people. With the blessing of the politicians.

The seemingly endless generosity of the financial industry took on absurd forms: customers were sent credit cards without requesting them. Some of them came with a credit limit of several thousand euros. Loans for new cars could be spread out over decades. Things got truly wild when it came to financing real estate purchases. Huge sums were handed over with practically no security. "We had a 21-year-old student come to us who had been given a loan of €180,000 for her apartment," says Herrero. "A young woman with no income whatsoever. Absurd." There was of course a catch. "Ninety-five percent of loans had variable interest rates attached."

For awhile, everything went well. But once the real estate bubble burst, the country's construction industry collapsed and economic growth came to a screeching halt. Furthermore, many highly-indebted homeowners lost their jobs. It was a perfect storm of debt. Indeed, enormous private debt is now perhaps the country's biggest problem. In addition, many construction firms were also involved in mega construction projects -- schemes which have since proven to be terrible investments.

And then the banks simply turned off the money tap. With sometimes bizarre results.

Fran Ameijeiras, 35, is one of those who should be regarded as a beacon of hope for the crisis-ridden country. He runs a chic bar with his British wife Ellie Baker, 29, in the hip Almirante Street. The bar has plush red furniture, black leather chairs, and a new "Churchill Lounge," where dark green wood paneling lines the wall. The menu includes specialities like kangaroo meat and several types of gin.

Ameijeiras used to have a solid bank job. Now, he and his wife often work in the bar day and night, particularly during the World Cup, leaving little time for their two-year-old son. But the business is doing well, says Ameijeiras, who hails from Galicia. The Bristol Bar's clientele is upscale and have been largely unaffected by the crisis.

As a result, the young couple recently began thinking of opening a second bar. "We asked six banks," he says. Three didn't even reply, while two rejected the request immediately. In the end the project died. Ameijeiras looks resigned. When he and his wife started out four years ago, after coming up with a dream to produce their own gin, "they practically gave me the money." Back then he didn't even have to produce any documents.

This month, though, Ameijeiras is content to profit from the football frenzy. Even if the euphoria only lasts a short while, it means a few more days of people bellying up to the bar -- and philosophizing about the wondrous feats of their national football team. 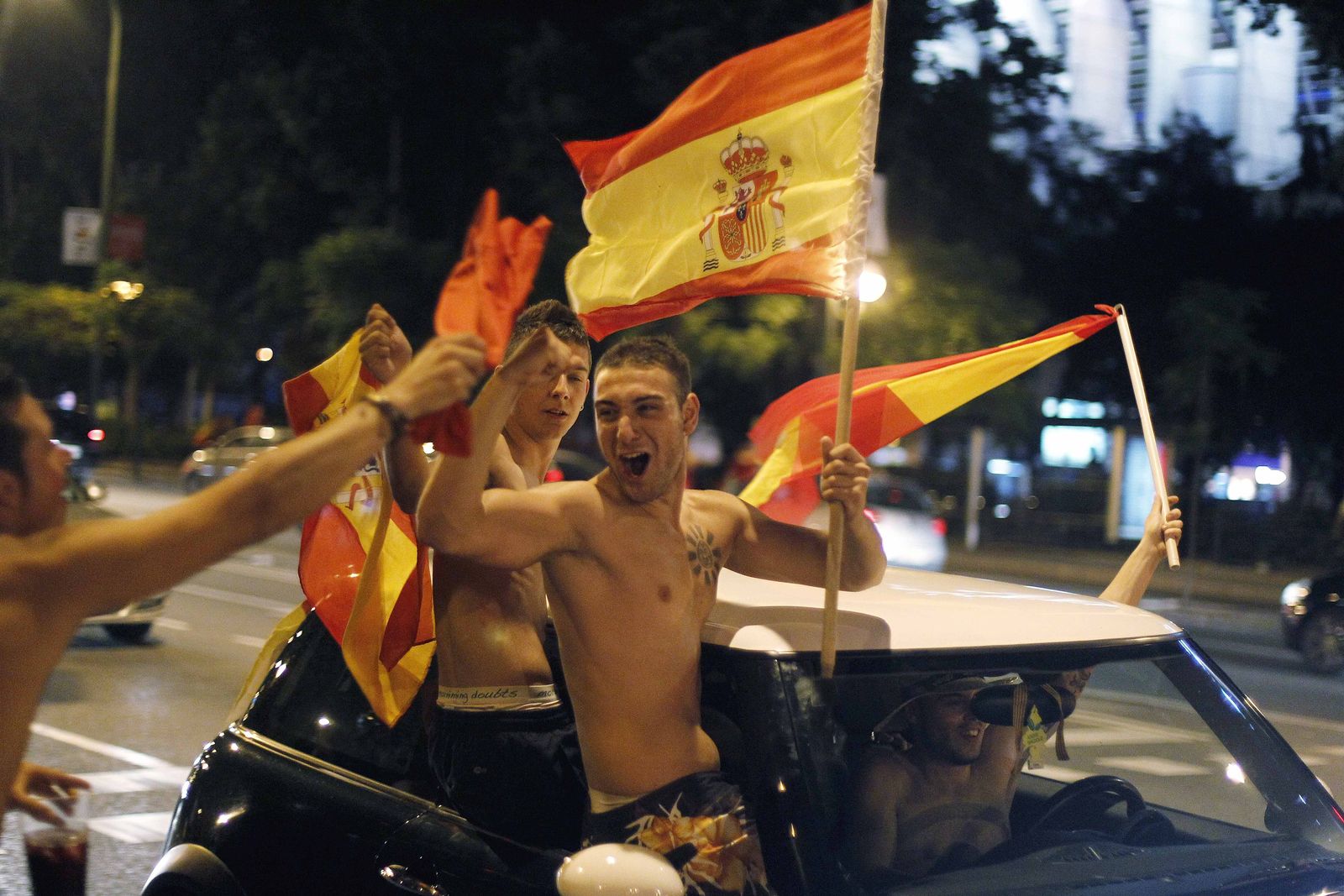