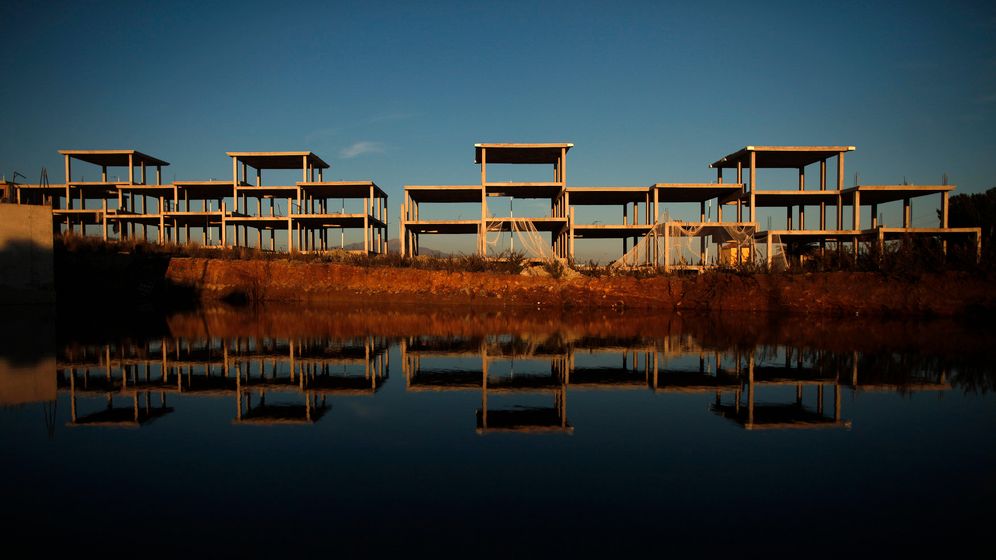 It had become a trend among top European politicians to forecast that the worst of the euro crisis had passed. A pledge by the European Central Bank to buy up unlimited quantities of sovereign bonds as needed, promising numbers from Greece indicating that the country was finally getting its budget deficit under control and a reform-minded government in Rome -- 2012 seemed set to go down in history as the year the crisis lost its bite.

This week, the outlook is looking less rosy. And much of the pessimism is focused on the two countries long seen as potentially the most dangerous should the euro crisis grow: Spain and Italy.

The situation looks especially bleak in Madrid, with real estate giant Reyal Urbis filing for insolvency on Tuesday. With debts of €3.6 billion, the bankruptcy would be the second largest in Spain's history after real-estate company Martinsa-Fadesa filed in July 2008 with debts of €7.2 billion. Reyal Urbis has until Saturday to ward off insolvency by reaching a deal with its creditors.

The demise of Reyal Urbis isn't just a problem for Spain. Several German banks are also among the company's creditors. Furthermore, the firm's list of Spanish debt holders reads like a who's who of the country's already wobbly financial industry, including Santander (which holds €550 million in Reyal Urbis debt), Banco Popular (€220 million) and BBVA (€120 million).

Tops on the list, however, is Bankia which is owed at least €460 million by the real estate firm, with Reuters reporting that number could be as high as €785 million. Bankia was placed under government control in 2012 and received bailout aid from the European Stability Mechanism (ESM). Furthermore, Spain's "bad bank" SAREB -- set up last year to help absorb a raft of bad real-estate debt from the books of Spanish financial institutions -- is also involved.

Still, the insolvency has not come as a surprise. The Spanish real estate market has shown no signs of improvement in recent months and prices continue to fall -- with property in the country having lost 40 percent of its value since 2007. It is a development which has hit construction giants like Reyal Urbis hard and is largely responsible for the troubled state of Spain's banks. Even worse, experts do not expect things to improve any time soon.

In addition, new regulations from Madrid have forced companies to undertake larger write downs on their property holdings. And the establishment of a bad bank has also meant that it now often makes more sense for financial institutions to pull the plug on bad loans rather than to patiently agree to refinance.

Beyond the country's financial industry, however, the insolvency provides yet a further indication as to just how far away Spain remains from economic health. Unemployment remains at a record high of 26 percent and data from the fourth quarter of 2012, showing a worse-than-expected contraction of 0.7 percent, has cast doubt on a return to growth this year.

Furthermore, the government of Prime Minister Mariano Rajoy is struggling to survive an ever-expanding series of corruption scandals, some involving his own conservative Popular Party. This week, Spanish papers are reporting that King Juan Carlos may even be more tainted than thought by an ongoing scandal involving his son-in-law Inaki Urdangarin.

The Need for a Bailout?

Despite the troubles in Spain, however, it is Italy that has Europe -- and Berlin in particular -- holding its breath this month. The reason the country's general election scheduled to be held on Sunday and Monday -- and the real risk that former Prime Minister Silvio Berlusconi might actually win the vote.

Though public opinion polls are banned in the country for the two weeks prior to elections, the Italian media is reporting this week that the camp of center-left candidate Pier Luigi Bersani's lead over Berlusconi's coalition has shrunk to a mere 3.5 percent. And if Berlusconi returns to the helm, most expect that Rome will return to the abyss it found itself staring into at the end of 2011. Indeed, Italy's largest investment bank Mediobanca said this week that it believes a Berlusconi victory would trigger an investment market shock, ultimately leading to the need for an EU bailout of the debt-laden country.

Berlin, too, has warned of a Berlusconi resurrection, with German Foreign Minister Guido Westerwelle issuing a barely concealed admonition to Italian voters on Tuesday. He was echoed by Ruprecht Polenz, the chairman of the Foreign Affairs Committee in German parliament and a senior member of Chancellor Angela Merkel's Christian Democrats (CDU).

Norbert Barthle, CDU budget expert in parliament, was even starker in his warning. Speaking to Reuters, he said: "If Mr. Berlusconi wins the election, this course (of reforms) could be in danger. Doubts about Italy's solidity could have serious consequences for the euro."

Back to the Drawing Board

Ultimately, those doubts might multiply regardless of who wins the election. Mario Monti, the country's outgoing technocrat premier, was able to shave percentage points off the budget deficit and introduce modest reforms. But the last six months of his 14-month stint was less productive as he began encountering resistance. And the country's next government, whether from the right or the left, likely won't have a mandate sufficient enough to make much headway either.

That such headway is badly needed has been well documented, most recently by the Economist, which noted that Italy is one of only two euro-zone countries which have seen a fall in per-capital GDP since the introduction of the euro. Globally, it ranks 169th out of 179 since 2000 in terms of per capita GDP growth.

The International Monetary Fund recently noted that the Italian economy stands to make huge gains if the country's politicians can agree on a far-reaching package of economic and labor market reforms -- worth up to 10.5 percent growth over the next decade. But if Berlusconi wins next week, the opposite, it would seem, also holds true. Italy could trigger a return of the euro crisis, just when Europe thought it was out of the woods.