When night falls in Erfurt, Diego Lopez has to go into the "hole." That's what the 21-year-old Spaniard calls the cellar of an old school where he and 20 of his countrymen have been sleeping in recent weeks. Bunk beds are crammed next to each other in two small rooms, which smell like sweat and dirty socks, Lopez says. The ventilation system doesn't work properly, and they all have to share a single shower, he adds.

But unlike their last accommodations, at least the heat works and they don't have to sleep on the floor. Furthermore, Lopez can still afford to stay here. A night in the "hole" costs €3.50 ($4.74).

A trained geriatric nurse, he is one of 128 Spaniards who have been stranded in Erfurt after being promised jobs that didn't come through. Full of hope, they struck out for Germany two weeks ago to take part in a program that the Federal Employment Agency calls "The job of my life." The new initiative promises young people from ailing southern European countries either dual vocational training or employment as a skilled worker, along with language courses and lodging -- all subsidized by the German state. And it was this program that two private job placement agencies used to lure the Spaniards to the eastern German state of Thuringia.

Their dream jobs never materialized, though. "They deceived us shamelessly," Lopez says. He's talking about Kerstin S. and Sven K., the heads of the agencies X-Job and Sphinx Consulting. "Sven told me that I would earn €818 per month and live in a four-bedroom shared apartment," he says.

'Germany Is Not Paradise'

Instead of a work contract at an Altenburg care facility and a flat share, however, he was placed in a grim building with no running water. The companies put other fellow jobseekers in unheated barracks in an industrial part of town. Some program participants report having to spend the night in cars. Meanwhile, they haven't seen a cent of the funding they were promised.

But far worse for the Spanish jobseekers was finding out that there weren't jobs waiting for them after all. Hardly any of them received the job contracts they were promised, and often the companies had been given hardly any information about the newcomers at all. The applicants, companies and politicians all agree: Both placement agencies failed.

"Fundamental due diligence was obviously violated," says Matthias Machning, Thuringia's economy minister. Machning, of the center-left Social Democratic Party, is alarmed: Spanish journalists are coming to Erfurt by the dozen to report on their fellow countrymen. "Germany is not paradise," the radio station Cardena Ser called one of its segments. On Wednesday, Machning convened an initial crisis summit with representatives of the region's business community and the Spanish Embassy. "This is about the image of Thuringia and of Germany," said the politician.

"These agents overreached hopelessly," says Dirk Ellinger, head of the German Hotel and Restaurant Association (Dehoga) in Thuringia. "They didn't even manage to produce accurate name lists of the program participants." Kerstin S. set out to place 70 Spanish trainees with restaurants, hotels and large-scale culinary companies. For a nominal premium of €250 the agent pledged a comprehensive, worry-free package: from the pre-selection of qualified candidates, to the organization of German classes, to accommodation in Thuringia.

But Kirsten S. repeatedly botched appointments with the businesses, missed deadlines and made false claims, says Ellinger. "And then when the first Spanish person arrived, she sent me an email asking how quickly I could draw up an internship contract" -- ostensibly to enable her to apply for the government subsidies of several hundred euros per month held out as a prospect to the "Job of my life" participants.

Kerstin S. denies everything. "Dehoga lies," she says. All the companies "had the knowledge that these young people were coming," adding that many training contracts fell through because of poor language skills. "A lot of these people have no interest in learning German," she says. The young Spaniards had apparently been wrongly informed about the program by her partner Sven K., she adds. He in turn blames her for the debacle.

Politicians and businesses are now trying to find a common solution. Minister Machnig called on Friday for a second emergency summit to which he invited all the young people involved. The Dehoga companies have also begun hiring on their own, and have already signed 50 internship or training contracts. "In the end, we'll take on maybe 80 Spaniards," says director Ellinger. And the government subsidies could come through in the end as well. "This is a matter of extreme hardship that we are following with great attention," says a spokeswoman for the Federal Employment Agency.

Diego Lopez fervently hopes he might end up with a job in the promised land after all. His money is almost gone. And the €150 for his German course in Spain, airfare, rail travel and accommodation that the agents promised would be reimbursed to him by the German government? He'll probably never see any of it. To receive the funds, the agents would have had to submit applications in advance to the Federal Employment Agency. To date, no single such document has been received. 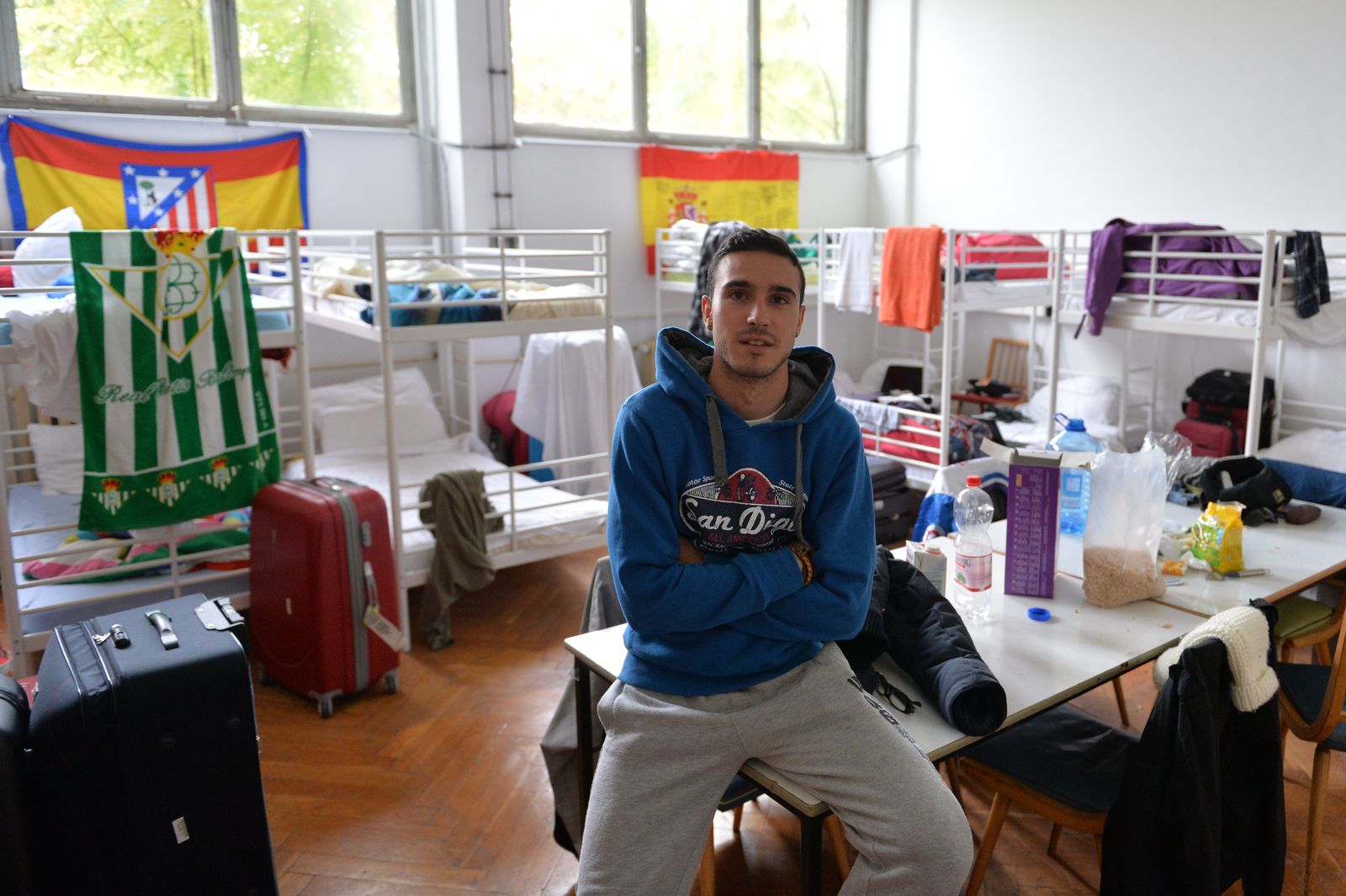 Diego Lopez, 21, was promised a job contract and shared apartment, but they have not materialized.