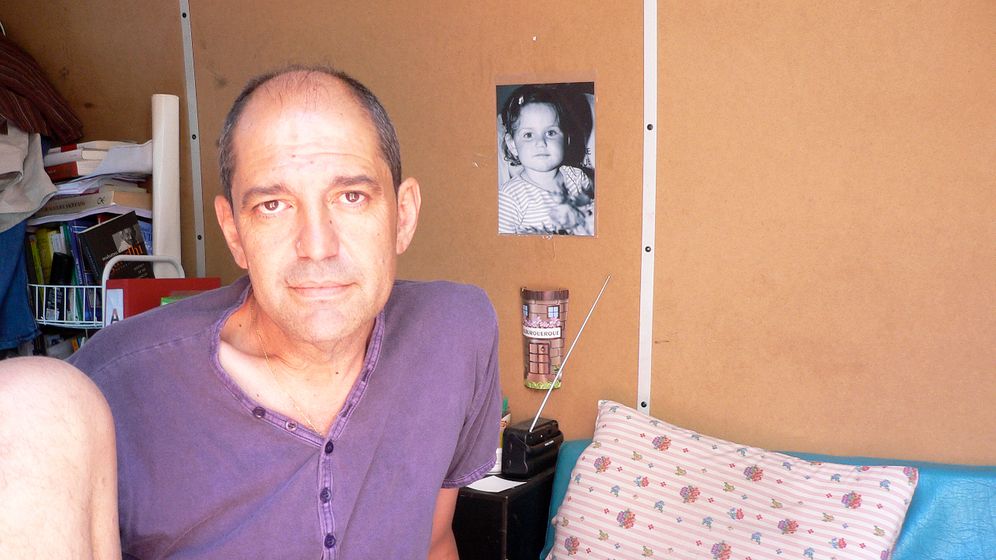 It's been over four months since Angel Vadillo began camping out in an old van in front of Spain's Ministry Industry on April 10. For the last two of those months, he hasn't eaten. His van is spare, decorated only with a picture of his one-and-a-half-year-old granddaughter. Aside from that, he only has a thin mattress, a full book shelf, a laptop and a mobile phone, both of which he charges with solar power.

Indeed, it is solar power that kicked off Vadillo's unusual protest in the first place. In January, Spanish Industry Minister José Manuel Soria cut all subsidies for new projects relating to renewable energies.

Vadillo is the mayor of Alburquerque, a municipality with a population of 5,500 in Extremadura in the west of Spain. For the last two decades, Alburquerque has staked its future on solar energy, and five new facilities with a capacity of 250 megawatts had been planned prior to the subsidy cuts. Now, those plans have been shelved: "That means that we will lose some 850 jobs," says Vadillo. It is estimated that the measure will cost a total of 10,000 jobs across the country.

Vadillo is hoping to force the minister to at least take a seat at the negotiating table. His mission began by walking the 600 kilometers (311 miles) from his constituency to Madrid. When the minister of industry refused to receive him, he decided to camp outside the building. When that too failed to get him the result he wanted, he stopped eating. That was on June 11.

By now, the mayor has become visibly emaciated. But he has lost none of his resolve. "I drink eight liters of honey water every day," he says. "That keeps me sharp." An ambulance stops by daily to check on his health. "It is becoming critical," says one of the medical personnel, but Vadillo intends to keep going.

'More of a Monologue'

The mayor has long since become something of a symbol in Spain of the desperate determination with which the Spanish are fighting against the consequences of the economic crisis which has enveloped their country and the tight austerity measures imposed by the government.

Soria did consent to a single meeting with Vadillo once the mayor made his hunger strike public. "Our talk was more of a monologue," Vadillo says. "I explained my position and the minister didn't say a word except that I should reconsider my position." Vadillo believes that the government is using the economic crisis merely as a pretext "in order to push through their conservative policies."

Soria, for his part, refers to the abysmal state of the Spanish budget and intense pressure from the European Union to improve the situation. Indeed, Brussels had long been requesting that Spain cut its generous solar subsidies; in 2012, the cuts pushed through by Soria's ministry will save some €160 million ($196 million).

Still, the environmental organization Greenpeace has blasted Soria's subsidy cuts as a "serious historical mistake," and several small energy suppliers have also criticized the decision. Spain's global competitiveness, they say, has been limited in a sector in which they had been a leader. Prior to the cuts, Spain was the most attractive location worldwide for renewable energies. The subsidy slashes have caused the country to slip to 13th place.

"Simply put, the government gave in to the lobbying pressure exerted by the large energy firms," says José Rivero, head of the company RS Solar, which is based in Vadillo's town of Alburquerque. Prior to the cuts, RS Solar employed 83 people. Now, that number has dropped to just 16. "The new law does not threaten the existence of our company, we will just change our focus," says Rivero. "The jobs that we would have created in Extremadura will now be created in other projects in Mexico and Algeria."

Mayor Vadillo himself admits that solar subsidies in Spain had long been on the generous side. "Maybe some projects should have been looked at more closely before the money began flowing," he says. "But that is exactly what I want to discuss with the minister at the negotiating table." The job losses for his constituency aren't the only problem. Tax revenues have fallen precipitously as a result, meaning that the community can no longer afford several social projects, including a retirement home and a jobs program for the disabled.

In order to provide their mayor in far-away Madrid with moral support, dozens of Alburquerque residents gather for half an hour every morning at 10 a.m. in front of city hall. He also has 4 million online supporters. "He is our hero," says one woman demonstrating in front of city hall. "But he should stop. We don't want him to die."

"I am prepared to do everything for my municipality," says Vadillo in his van. "This is not about survival. It is about living with dignity."