The World Economic Forum couldn't have found a more suitable keynote speaker. Leading the charge in efforts to save the euro, German Chancellor Angela Merkel has become the most powerful politician in Europe, and the person expected to save its currency from collapsing and wreaking financial havoc worldwide.

As the country with the deepest pockets in Europe, expectations are high when it comes to Germany's role in the currency crisis. But even though the world is talking about Germany, when Merkel took to the podium in Davos on Wednesday, she talked about the rest of the world instead.

The first part of the chancellor's speech focused on global issues, such as the sluggish progress in climate protection efforts and World Trade Organization talks. But then she got around to Europe, praising the reforms made so far in the crisis-stricken countries. She also urged more European integration. Without it, she said, "we will remain an interesting holiday destination for a long time, but we won't be able to produce prosperity for the people in Europe anymore."

When she turned to Germany, Merkel insisted that the country was prepared to do what it takes to save the euro, but the comments that followed showed she wasn't ready to get overly ambitious on that front.

"Germany is thought to be especially strong," she said, adding that this is not entirely wrong. But when Germany makes a promise "that through tough attacks on the market is also not redeemable, then Europe has a totally open flank."

The comment echoed another she made in an interview she gave on Wednesday to six European newspapers, including German daily Süddeutsche Zeitung, when she warned about placing too many financial burdens on Germany. "Amid all the billions in aid and rescue funds, we Germans also must watch that we do not lose our strength in the end -- because our possibilities are not endless either, and that would not help Europe as a whole," Merkel added. "We show solidarity, but must not forget (countries') own initiative."

Merkel's speech, during which she also stressed the need for European unity, seemed to be an effort to turn the focus away from Germany's role in the euro crisis. But the attempt is unlikely to be successful. Somewhat paradoxically, Berlin is being accused of both stubbornness in its reform demands and timidity in its leadership role.

Speaking to journalists on Wednesday in Davos, former investor and philanthropist George Soros accused Germany of acting like a strict disciplinarian over the rest of Europe, relegating its neighbors to "the status of third world countries" that must pay back their debts in a foreign currency. "The problem is that the austerity that Germany wants will push Europe into a deflationary death spiral," he said. "The economy will contract and tax revenues will fall. So the debt burden ... will actually rise, requiring further budget cuts and setting in motion a vicious cycle."

Soros is not alone in his criticism of Germany. In an article for the Financial Times on Monday, World Bank president Robert Zoellick also urged the country to take a greater leadership role in combating the crisis.

On Thursday afternoon, UK Prime Minister went as far as calling the Europe-wide financial transaction tax proposal supported by Merkel "madness," saying it was a distraction and European leaders would do better to concentrate on dealing with the debt crisis.

"Tinkering here and there and hoping we'll drift to a solution simply won't cut it anymore," Cameron said of the euro crisis. "This is a time for boldness, not caution."

Meanwhile, European leaders and the International Monetary Fund want Germany to increase its contribution to the European Stability Mechanism, the recently finalized permanent euro bailout which is already worth some €500 billion. Merkel has refused this repeatedly. She has also rejected two other suggestions which others think might ease the crisis, now moving into its third year. Neither jointly backed eurobonds nor more stimuli that would see the European Central Bank print more money are acceptable options for Berlin.

Instead, Europe needs deeper integration, growth and job creation, Merkel said during her speech. And after she attempted to distract focus to the entire Continent's role in the euro crisis, she pointed to world issues once again. Other countries have problems too, she said. "That comforts me. That means we can all work well together."

Merkel, however, may be the only person feeling comforted at Davos. 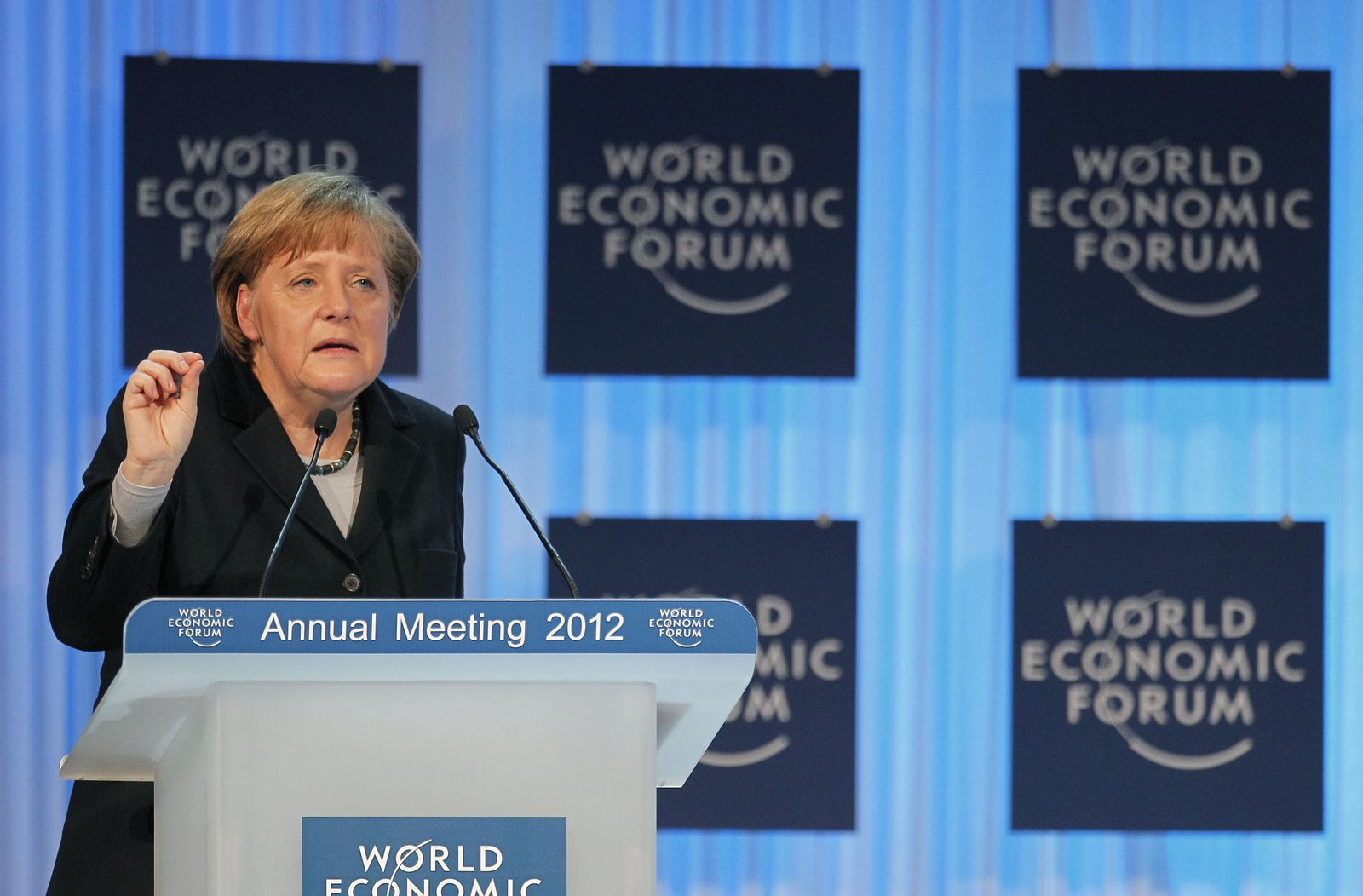 Merkel delivers the opening address at the World Economic Forum on Jan. 25.