Tired. Everyone is so tired -- the politicians, the people, the media, the institutions, democracy. Europe is tired, exhausted, haggard. Yet another marathon negotiating session? How many have there already been? Yet again these tired eyes of overexertion of those involved in the negotiations. Once again a postponement or a compromise that nobody is convinced of and is really just the start of the next crisis. This is how things have been proceeding for years now. Enough already.

We don't want to speak of greatness, or of political heroes or of far-reaching actions. That's difficult in a complex system like Europe. We want to speak of the minimum: Politics requires successes in order to legitimate itself. It has to solve problems, especially the really tough ones that require a lot of effort. But that's not happening. In the case of Greece, all we have been seeing are pseudo-solutions, if even that.

A brief breather is always given, only to be followed by the next marathon meeting and the next expedited proceedings in the German parliament. The exhaustion will continue to grow, as will the weariness that will catapult the next populists into power -- the very ones who will make solving the problems even harder. It's a vicious cycle.

A Permanent State of Crisis

But exhaustion is merely one of the costs of this permanent state of crisis. The truth is that we have lost Europe in recent years. It is no longer the Europe that its generation of founders and builders promised -- people like Robert Schuman, Konrad Adenauer, Helmut Kohl and François Mitterrand. It's almost the opposite. What we are living in today is an anti-Europe.

Much has contributed to this state of affairs -- not least the euro crisis. But nothing has been as damaging as the protracted fight over Greece.

Europe promised joint growth for everyone. Instead we have competition for prosperity. Many Germans don't want to have to sacrifice anything for Greece, whereas many Greeks expect Germans to make a contribution to ensure that what the Greeks are forced to give up doesn't become too harsh.

Europe promised an end to nationalist thinking and even the end of the nation-state at some point in the future. In truth, the Continent is going through a renationalization. Few continue to believe in the greater good and the states have their eyes set on their own interests.

Europe promised reconciliation with its history. But instead, history has become a weapon, with Greece demanding that Germany pay World War II reparations. Meanwhile, images of German Chancellor Angela Merkel wearing a Hitler mustache have become a regular feature at anti-austerity protests all over Europe.

Germany Has Overtaken its Partners

Europe promised political equality. The intention was for France and Germany to lead on the Continent, while at the same time taking into account the concerns of the smaller member states. But in the crisis, Germany has overtaken its partners and become the EU's dominant power.

Europe promised a Europe of the people. Instead, it is those institutions that are farthest from the voters that wield the greatest power -- the European Central Bank, the International Monetary Fund and the executive. Parliaments, on the other hand, which have the greatest democratic legitimacy, are being forced to fast-track their approval of decisions made in Brussels.

Europe pledged eternal peace. Fortunately, nobody is reaching for weapons. But the mood is not peaceful. Some media are reporting in an extraordinarily aggressive manner and an atmosphere of chauvinism has returned.

The promise was also that the European Union would play a strong role in the world -- as a political and economic power and as a model of the peaceful fusion of a continent after two world wars. Instead, Europe has become one of the world's problem children -- indeed the laughing stock at times. There can be no mention of any kind of significant influence.

In a single sentence: Europe is not only tired -- it is also a disappointment. This has also meant the loss of a quite likeable species: the European. In the 1970s and 1980s, many people in Germany felt more European than they did German. You don't hear people say that very often anymore, and that's sad.

It's Time for the Alternatives

Things can't stay the way they are. The admirable idea of a unified Continent cannot be allowed to be destroyed by the Greek crisis. And there are indeed alternatives to this politics of exhaustion, even if they do entail risk. Still, they would be better than what is happening right now.

One is the Grexit, which would see Greece leaving the euro zone and attempting to get by with its own currency. The second would be a debt haircut, meaning Greece would no longer be required to pay back a part of its debt. Both alternatives would trigger large tremors, but they would also provide the opportunity for a new beginning and an end of the crisis.

Those who still consider themselves to be Europeans at heart will speak out in favor of the second alternative, for stricter controls in exchange for generous aid and, ultimately, binding budget policies for all. That does come with a price tag, but also with the possibility that we still someday get the Europe that we were promised. 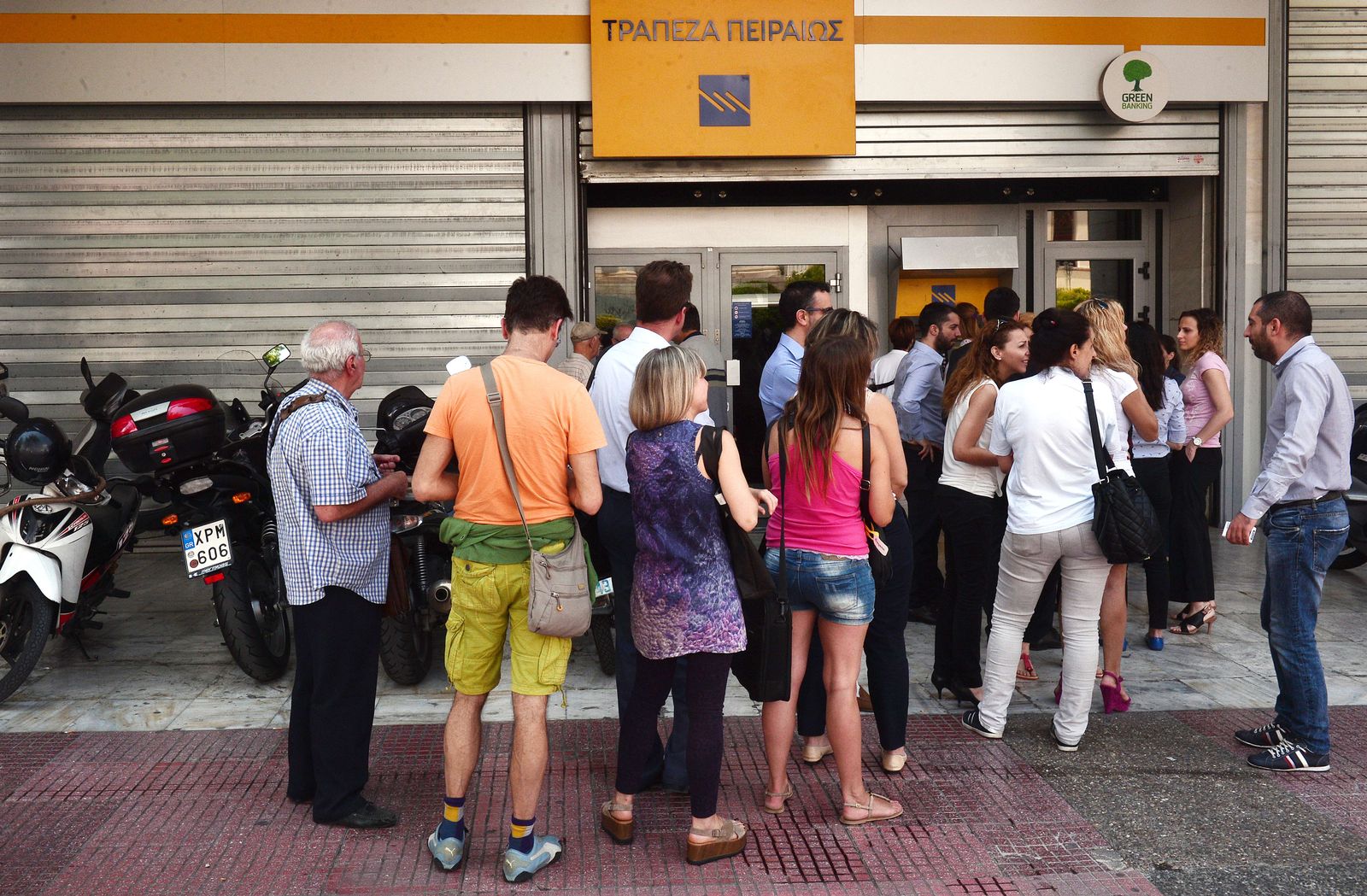 People in Athens line up in front of a shuttered bank to withdraw money from an ATM machine. This weekend, the Greek government imposed capital controls and closed banks in order to stop the flight of money from the country.