On our last day in Turkey, my family and I are not in the mood to go, but we have to leave the country. After several torturous months of uncertainty and concern, we have no other option. We fear for our safety.

The bags are packed. The furniture, books, clothing, everything is gone. My son has been taken out of kindergarten; it was a painful farewell for him too. Before we drive to the airport, I write down a list of telephone numbers for my wife: colleagues, diplomats, friends in Istanbul. These are in case I am detained at the airport and my family has to continue their journey without me.

Since the beginning of the year, the Turkish government has declined to grant me accreditation as a foreign correspondent, thereby denying me the ability to work. As a German journalist living in Turkey, I need a residency permit -- and this permit is linked to my press accreditation.

Accreditations are normally approved at the turn of the year, but this year all German journalists have had to wait unusually long. Prime Minister Ahmet Davutolu repeatedly assured Chancellor Merkel at the beginning of the year that all German correspondents would receive their papers. The German side relayed this message to us on multiple occasions.

I never received any notification at all. Officially, my request hasn't been declined, it is being "examined." But neither the Turkish nor the German authorities believed that my accreditation would still be granted.

Even worse, I received warnings. Turkish state prosecutors, who are critical of the government and its interference in the judiciary, told me that, if I were to stay in the country, I could conceivably be charged under some pretense. Perhaps for "supporting a terrorist organization" or for "insulting the president." These are common accusations in Turkey against journalists who are too critical of those in power. Thus far, mainly domestic journalists have faced them.

This was not the only tip. German officials advised me to leave the country as soon as possible too, as the Turkish authorities could otherwise "escalate" the situation. And so my family and I were escorted to the airport last Sunday by a German diplomat -- as a precautionary measure.

When I moved to Turkey three years ago -- full of curiosity and interest -- I could never have imagined that I would be forced to leave the country in such a fashion. Prior to my posting in Istanbul, I had reported for SPIEGEL and SPIEGEL ONLINE from Pakistan. We thought Istanbul would be quieter than Islamabad, without the terrorism and with greater press freedoms. How wrong we were.

I entered a country that, under Recep Tayyip Erdogan, a gifted populist, had experienced a modernization and economic wonder. In the first years of his rule, he had thoroughly democratized the country. Most people in Turkey experienced a revival and the peace process between the Turkish state and the Kurdish terrorist group PKK began.

Yet shortly before our move in the summer of 2013, the Gezi protests began. They initially started as protests against the building of a shopping mall in Istanbul's Gezi Park, but after police used violence against the demonstrators they evolved into national rallies against Erdogan's growing authoritarian reign.

The premier, who had long worked to bring his country more in line with Europe, now ruled in an increasingly autocratic manner. Not only did he have demonstrators bludgeoned and shot with tear gas, water cannons and rubber bullets after the Gezi protest, but he also had journalists imprisoned because their coverage didn't suit him.

I was in a country which had slipped into turmoil, in which democracy appeared to be increasingly endangered, and I made an effort to reflect events critically and fairly in my reporting. Yet, just like many other journalists, I learned the president and his supporters are allergic to any form of criticism.

The Climate in Contemporary Turkey

What I experienced in early 2014, just a few months after my arrival, was to some extent a misunderstanding, but it would go on to shape my entire time as a correspondent. And it says much about the climate in contemporary Turkey.

The worst mining disaster in the country's history had just occurred in the western region of Soma and 301 people had died. Members of the government blamed inadequate safety measures in the pit. But Erdogan felt he was unfairly blamed by survivors and by victims' families. He claimed such catastrophes were common.

I was on location at the time and spoke with survivors and family members. An incensed miner, who had recently been rescued, told me, "Up until now I would never have said anything like this, but now I'd just like to say to Erdogan: Go to hell!" I quoted the man in one of my stories on the disaster. My colleagues at SPIEGEL ONLINE turned the quote into a headline: "Go to hell, Erdogan!"

Although the quotation marks clearly distinguish the headline as a quote, Erdogan's supporters put the words in my mouth. I received thousands of threats and insults by email, amongst them sentences like: "If we see you on the street, we'll cut your throat!"

I left Turkey at that time too, temporarily for two weeks. Coincidentally, Erdogan was making an appearance in Cologne at the time, where 15,000 people celebrated him in a stadium there. I went along to hear his speech. Twice he mentioned "this journalist who wants me to go to hell." He added: "Clearly he knows the way there." Did Erdogan truly believe I had written that? Had he been misinformed?

Turkish journalists have long had to work under constraints. The state employs officials specifically to examine newspapers to see whether they contain insults against the president; publishing them is a punishable offence. Newspapers that are deemed to be supporting the opposition must deliver copies to the censors each day.

At some point, the self-censorship starts. What can I write? Whom can I speak with? Executives, politicians --even from the ruling Justice and Development Party (AKP) -- artists, writers, ordinary citizens; they all refuse to talk to journalists, explaining "You know of course we can't speak openly with journalists. Who knows what might happen if it were to become known that I had spoken to you."

Since Erdogan's Islamic AKP lost their absolute majority a year ago and the Kurdish conflict in the eastern part of the country re-intensified, the atmosphere in the country has become yet more authoritarian. Branches of the Kurdish People's Democratic Party (HDP) have been stormed by AKP supporters, as have the offices of popular newspaper Hürriyet.

Ultimately, the well-known journalists Can Dündar and Erdem Gül -- the former is editor in chief of Cumhuriyet, the latter its Ankara bureau chief -- were accused of "supporting terrorists." After the country's high court acquitted them, Erdogan questioned the court's legitimacy. The government subsequently put the often critical Zaman, one of the most widely read newspapers in the country, under state control.

These are tough times for Turkish journalists. And, as my own experiences have taught me, they are increasingly tough for foreign correspondents too.

What lies in store for Turkey in the future? After the explosions in Ankara on Sunday, for which the PKK splinter group Kurdistan Freedom Falcons has claimed responsibility, Erdogan vowed to fight against terrorists with an "iron fist."

He believes the term "terrorist" should be broadened: "There is no difference whatsoever between terrorists who carry weapons and bombs and those who use their position, pen or title to reach their goals," he reportedly told the state news agency Anadolu. "Just because someone has a title such as member of parliament, academic, journalist, or head of an NGO does not change the fact that this person is actually a terrorist."

As a journalist, I have always wanted to present a balanced picture. In past months, I travelled to the southeast of Turkey, where the government says it is fighting PKK terrorists, who launch attacks every few days. Yet I also encountered a suffering civilian population. Curfews are making life difficult for people. They are forced to spend days -- sometimes even weeks -- holed up in their homes, taking great risks to obtain groceries. Yet one only needs to talk to them, let alone quote them, before one is accused of helping "terrorists."

I therefore wanted to talk to the Turkish military and to the soldiers fighting in the area in order to understand their views of the situation. Not one request to accompany them was approved. I wanted to speak to officials in government, and of course to interview Erdogan, but my requests were usually not even answered. Clearly, the government expected us to report in accordance with their views, without being allowed to talk to them.

Turkey fascinated me from day one: the energy of Istanbul, the simultaneous existence of modernity and backwardness and the efforts of many people to make something better out of their country. Erdogan is not Turkey. If around half the country voted for him, that means half did not. Yet, the opposition is weak. It has no charismatic figure, is often chaotic and lacks a concrete plan.

There is much to report that is praiseworthy, especially the efforts Turkey is making in regards to the refugees from Syria. That is why I don't support demands to withdraw European financial support due to attacks on press freedom, and due to my own case. Why should refugees bear the consequences of Turkey's disagreeable approach to press freedom? At most, one can criticize the EU for attempting to absolve itself of any responsibility by way of a questionable deal.

As my family and I arrive at Ataturk airport in Istanbul, we are anxious. The official at passport control examines our passes and sees that, although we have applied for new ones, we do not have valid residency permits. He flicks through our documents as I glance nervously back to the diplomat standing behind us in the background.

Then, after what feels like an eternity, the official passes us back our papers. He nods. We are out of Turkey.

Editor's Note: The following is SPIEGEL ONLINE's official statement about its decision to pull Hasnain Kazim out of Turkey:

SPIEGEL ONLINE has pulled Hasnain Kazim, it's Istanbul correspondent, out of Turkey. Despite months of efforts, the Turkish authorities did not provide an extension of his press accreditation. Residence permits for foreign journalists are linked to a person's press accreditation. Kazim was thus no longer free to work in the country.

In response to the development, SPIEGEL ONLINE Editor in Chief Florian Harms said:

"In the past years, Hasnain Kazim has done an excellent job reporting on political and societal events in Turkey. In the course of that reporting, he has written many articles in which he fairly, but also critically, brought to light abuse and mistakes on the part of the government -- as any good journalist would do. Based on the behavior of the Turkish government, we can draw no other conclusion than that his journalistic reporting is no longer desired in the country. This behavior toward our correspondent and, thus, also toward SPIEGEL and SPIEGEL ONLINE is, in our opinion, intolerable and also infringes on the freedom of the press. We have decided to withdraw Hasnain Kazim from Istanbul. He will now be based in Vienna. DER SPIEGEL and SPIEGEL ONLINE will obviously continue to report critically, but also fairly on events in Turkey." 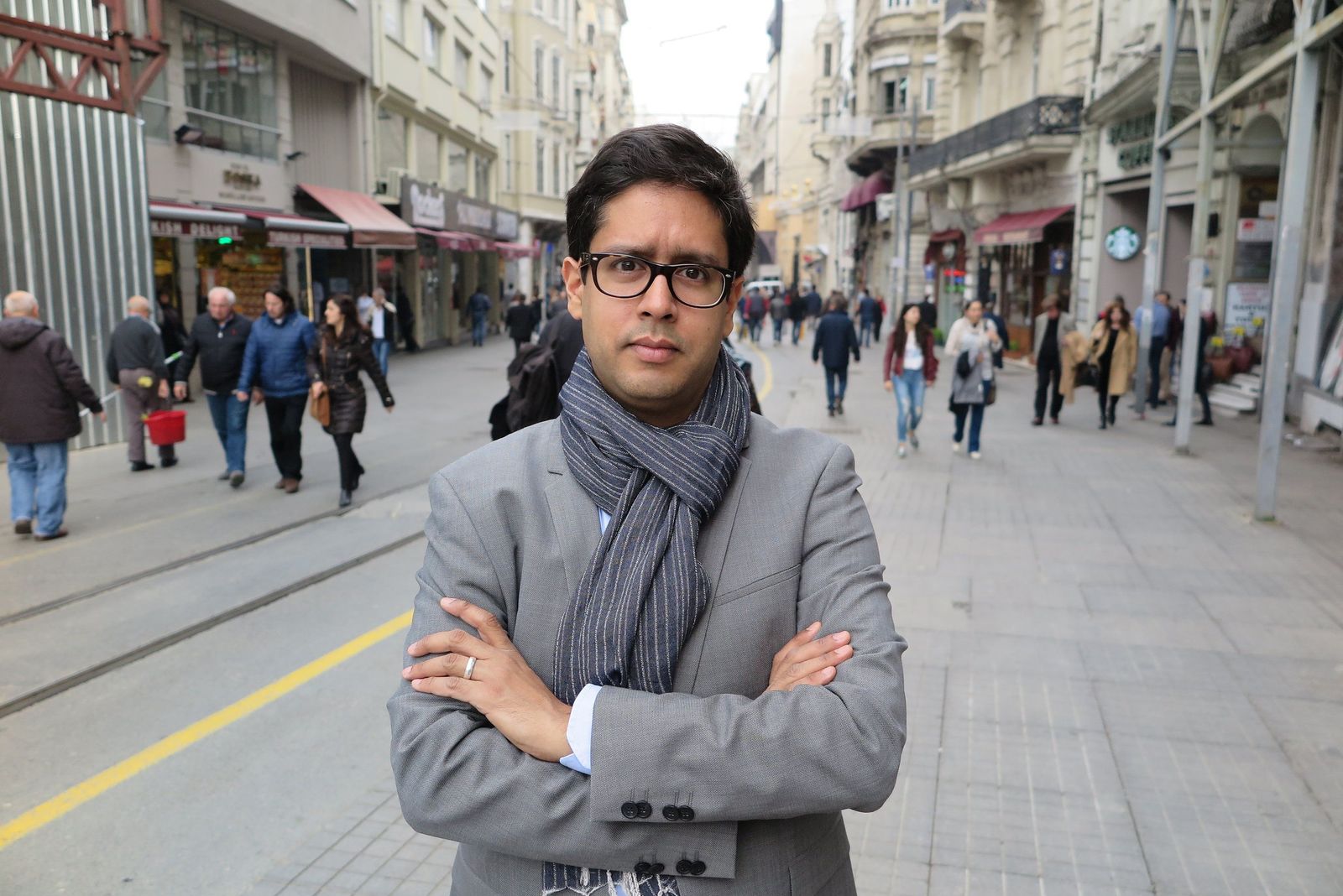 Hasnain Kazim, SPIEGEL's correspondent in Turkey, was forced to leave the country after his press credentials were not renewed.