Angela Merkel, it is often said, has a terrific feel for her people. That's why she is revered by German voters and that's why she wins elections. But what is true in Germany does not apply in Greece. The victory of Alexis Tsipras in elections one week ago is also a defeat for the German chancellor. The Greeks have elected a radical government in order to free themselves from German pressure.

Merkel, of course, could simply say that she's not responsible for the Greek people. German interests are her top priority: keeping the currency strong and ensuring that Berlin's coffers don't take a hit. But that's old thinking, nation-state thinking. Merkel herself played a role in the renationalization of politics in Europe. She thought she could get by without paying too much regard to sentiment in Greece. Now, though, the Greek people are out to settle a score.

The fact is that there is a political union in Europe, even if it lacks strong institutions. It is a union being created by the people. And nw that the Greek people have chosen Tsipras as their leader, everyone has a problem. And it is a problem to which Merkel, first and foremost, must find a solution.

It does no good to chastise the Greeks for this election. Tsipras may be shrill -- and of course the xenophobia and anti-Semitism of his coalition partner Panos Kammenos is detestable -- but both now comprise Greece's legitimate government. Other EU member states will have to learn to deal with them.

It also does no good to continue saying that the Greeks weren't economically mature enough for the euro, that the Germans have showed their solidarity in the form of bailouts and that the Greeks should have made a greater effort to overcome the financial crisis in their own country. That's all correct, but it doesn't help so long as most Greeks see things differently. And they do. Sometimes public sentiment has a greater influence on politics than do facts.

Policies that at first seemed correct are proven wrong if they make the situation worse rather than better. And with Tsipras' election, the situation in Europe has deteriorated dramatically. Politicians across Europe will now need to take steps to improve it. Before that can happen, they will need to define their goals and strategies.

Flirting with Moscow and Beijing

If the situation escalates and Greece exits the euro, two major dangers lurk. One is that Tsipras will secure the money his country needs from Russia or China and he has already hinted at such a direction. Should he? The answer is no, because those who become financially dependent on Russia or China could soon become stooges of an authoritarian state. Even if Greece were to leave the euro zone, it would still remain a member of the EU, meaning Putin or Xi Jinping would then have a voice in Europe and in NATO. His opposition to further sanctions against Russia shows that Tsipras has no scruples on the issue.

The other danger is that Europe will become a laughing stock in the international community. In parts of Asia and in the United States, there is greater economic growth than on the old continent. Europe can only win respect through its unity. Other countries eye the fight to save the euro as spectators who are not always well meaning. If Greece were to exit the common currency area, it would be perceived as a failure, especially for Merkel. A continent that is led poorly doesn't need to be taken particularly seriously by others.

That's why there need to be two goals -- for Greece to remain part of the euro zone and for the common currency to remain stable, as difficult as it might be to reconcile the two. The situation is difficult and there's no room in the debate right now for political know-it-alls. It is time for realpolitik, for small steps.

Solidarity Is the Right Course

This means that Germany must display forbearance. Germans have been forgiven for so much in their own history that they should also be capable of forgiving others. Despite mistakes made by the Greeks, solidarity remains the correct course. That's not to suggest that the Tsipras administration can ignore the treaties Greece has with the EU. Nor should there be a debt haircut, because Spain and Portugal would demand equal treatment and that would place an unbearable strain on the euro zone. However, deferments and interest rate discounts are possible. No one should be too proud to talk about the possibility of concessions.

If Tsipras has an ounce of political understanding, then he knows that he can't demand too much from Merkel because she's obviously still accountable to German voters. And because the right-wing Alternative for Germany (AfD) party is waiting in the wings. Nothing would be worse than increasing the power of populists. If that is what Tsipras wants, then Europe has no chance.

Exactly 200 years ago, Europe's rulers succeeded at the Vienna Congress in balancing their interests, creating a halfway stable situation that lasted for decades, even though the temptation was great at the time to solve problems with weapons. The situation is much easier for European democrats today. Now they must show that they understand the concepts of diplomacy and compromise. 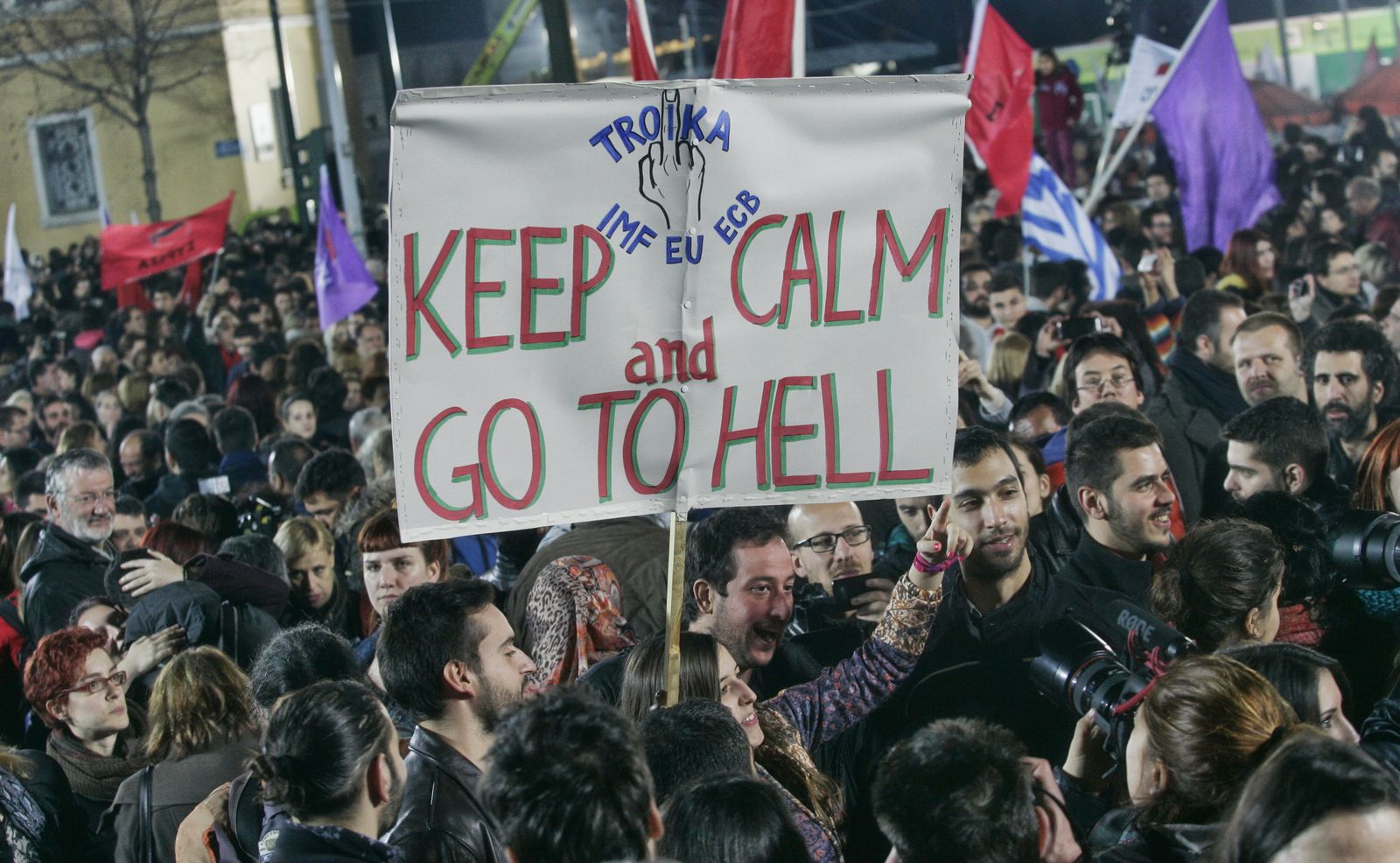 Syriza supporters at a rally just before the leftist party won Greek elections a week ago.